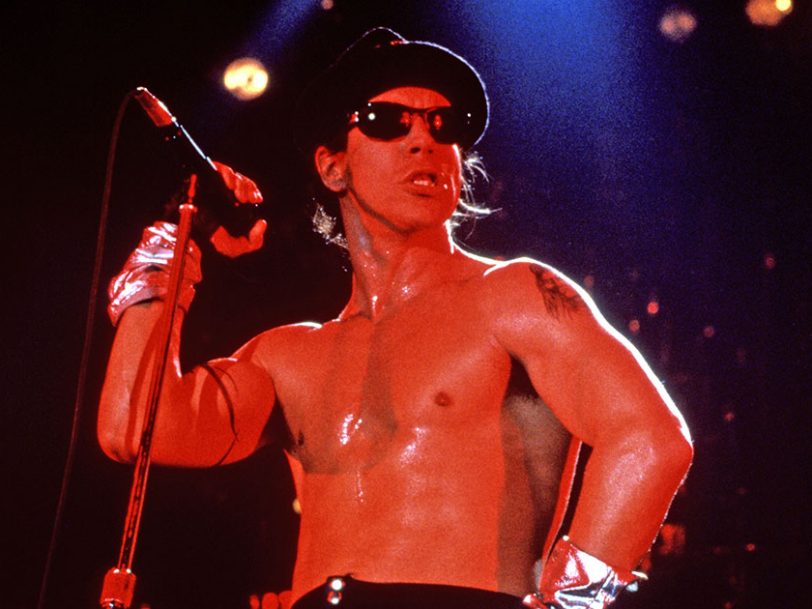 Characterised by its dark experimentalism, Red Hot Chili Peppers’ sixth album, ‘One Hot Minute’, emerged from a turbulent time for the group.

Growing up can be hard, and the early years of Red Hot Chili Peppers were harder than most. Drugs and death – and drug-related death – led to the loss of more than one key bandmember, and, by the time the group settled in to record their sixth album, One Hot Minute, they had taken their longest break yet between albums – a forced hiatus brought on by the departure of the guitarist who had become so crucial to their patented funk-rock sound.

Listen to ‘One Hot Minute’ here.

Red Hot Chili Peppers had already lost guitarist and founding member Hillel Slovak to an accidental overdose in 1988 – an event that troubled drummer Jack Irons to the point that he quit the band and was consumed by depression for years to follow. Yet within months of Slovak’s passing, the Chili Peppers recruited guitarist John Frusciante and drummer Chad Smith. A period of stability ensued, and the band’s popularity soared. 1989’s Mother’s Milk was a modest hit, but its follow-up, Blood Sugar Sex Magik, went stratospheric when MTV latched onto the singles Under The Bridge and Give It Away. Boasting one of the best 90s music videos, Under The Bridge helped turn the Chili Peppers into a household name, making sudden stars of the band. But Frusciante, who was then barely 20, struggled to come to terms with his new-found fame and took solace in heroin, dramatically quitting the group in 1992.

The search for a replacement was never going to be easy. Dave Navarro was always the band’s first choice, but since his previous group, Jane’s Addiction, broke up, he had been busy working on other projects and struggling with substance issues of his own. So the Chili Peppers ploughed on, auditioning, hiring and firing myriad other musicians. With the likes of Buckethead, Zander Schloss and Jesse Tobias failing to gel, Arik Marshall emerged as the most successful candidate, undertaking a full headline tour with the group under the Lollapalooza banner, and appearing in several music videos, as well as an episode of The Simpsons as a fully fledged member of the band.

When scheduling conflicts arose between Marshall and the remaining Red Hot Chili Peppers, he was dismissed and the band looked back toward Navarro. Jam sessions proved fruitful and the guitarist finally accepted the position, so the One Hot Minute sessions began at Los Angeles’ Sound Factory Studios in June 1994. But that merely introduced a whole new set of problems – namely the direction this new album would take. “It doesn’t really speak to me,” Navarro told Guitar World of his new band’s funk-based style. “But then again, when I’m playing with three other guys who I love and feel camaraderie with, it’s enjoyable to play funk.” These divergent interests would, however, be the least of the band’s problems. Unbeknown to the other members, frontman Anthony Kiedis was using heroin again.

A departure from the Chili Peppers’ trademark funk-rock

On top of keeping his addiction secret from the rest of the band, with Frusciante gone it was Kiedis everyone looked toward to keep the creativity flowing. But songwriting had turned into a very different experience with the new guitarist. As the singer later recalled in his memoir, Scar Tissue, “John Frusciante had been a true anomaly when it came to songwriting. He made it even easier than Hillel Slovak to create music. I just figured that was how all guitar players were, that you showed them your lyrics and sang a little bit and the next thing you knew you had a song. That didn’t happen right off the bat with Dave.” The lack of cohesion, at least initially, was filled in part when bassist Flea stepped up his songwriting game. It all created a sound that was a departure from the group’s trademark funk-rock.

Navarro brought with him a more metallic influence, as well as the retro psychedelia of his previous band. Rather than the more light-hearted themes of sex and partying, Kiedis’ new lyrics largely reflected his experiences with heroin. One Hot Minute’s Opening track and lead single, Warped, is a frenetic alt-rock thrasher, while Aeroplane features one of the more funk-filled moments of the album, as Flea’s dynamic bass playing takes the front seat. His daughter even adds vocals, along with her kindergarten classmates, on the song’s final verse, and Flea himself sings lead on the Doors-indebted trippyness of Deep Kick. The bassist also takes centre stage on the quirky Pea, a message to “the guys who beat the shit out of me at the Mayfair on Franklin & Bronson”. In contributing more actively to the songwriting process, Flea was even able to pay tribute to his good friend, the late actor River Phoenix, on the ethereal Transcending.

One Hot Minute was eventually released on 12 September 1995, and though it’s an album that wears its scars openly, it’s not without its merits. My Friends is perhaps an early indication of the path the Chili Peppers would tread with subsequent albums Californication and By The Way, while Coffee Shop and One Big Mob are more reflective of the earlier, funk-filled material found on Red Hot Chili Peppers’ self-titled debut album. And musically, Tearjerker is a beautiful tribute to the late Nirvana frontman Kurt Cobain, whose shock suicide the previous year ushered him into the infamous “27 Club” – and perhaps acted as a wake-up call to a band living perilously close to the edge.

Given the circumstances surrounding its creation, One Hot Minute can be viewed as a coming-of-age album by a group that would soon find themselves hailed among the best 90s musicians. It’s certainly a part of Red Hot Chili Peppers’ catalogue that is rarely touched in their live shows, despite the monstrous hits Aeroplane and My Friends. But, as painful a time as it was for the group to experience, like witnessing the shedding of their party-funk skin and emerging as the fully-formed rock behemoths they became, One Hot Minute was an essential album for the band to make.