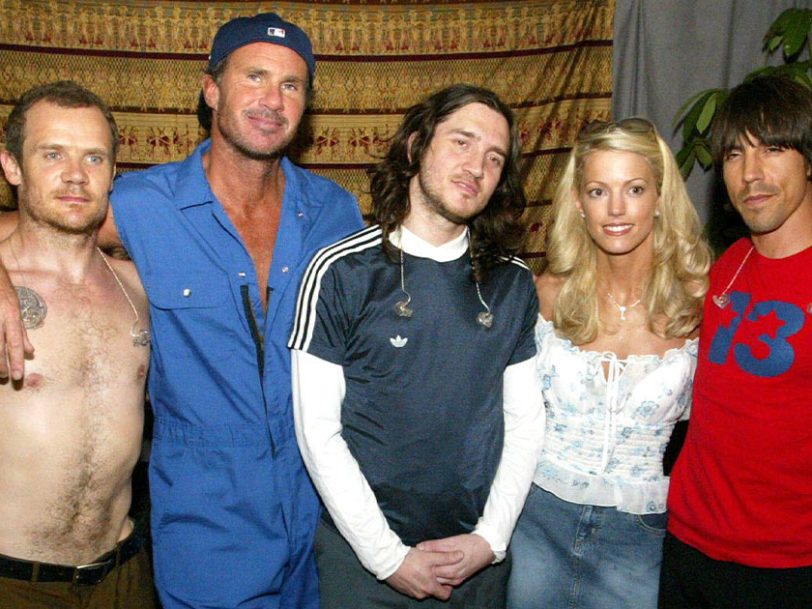 ‘By The Way’: How Red Hot Chili Peppers Cooked Up A Masterpiece

The album that nearly finished them, ‘By The Way’ offered new levels of sophistication for Red Hot Chili Peppers.

If 1999’s Californication hadn’t far enough separated Red Hot Chili Peppers from their debauched, party-funk, socks-on-cocks days – and, really, with a title like that, you’d be forgiven for thinking such hedonism wasn’t too far away – then 2002’s By The Way saw the quartet settle into a pair of comfortable slippers while sipping on a mug of hot chocolate. But if its predecessor was mere foreplay, then by this album the band had learned all the tricks to induce a full-blown orgasm. And it largely came from the gentle caressing of guitarist John Frusciante hitting all the right spots.

Listen to ‘By The Way’ here.

“We started finding some magic… John was brimming with confidence”

As soon as the whirlwind surrounding Californication dissipated, work began immediately on its follow-up. Initial sessions involved the band members bouncing ideas off each other at home and in practice spaces. Frontman Anthony Kiedis described the process in his 2004 autobiography, Scar Tissue: “We started finding some magic and some music and some riffs and some rhythms and some jams and some grooves, and we added to it and subtracted from it and pushed it around and put melodies to it.” Kiedis and Frusciante in particular threw themselves into the process, finessing the guitar lines and lyrics between them. According to the singer, “Writing By The Way… was a whole different experience from Californication. John was back to himself and brimming with confidence.”

Indeed, from the outset Frusciante had a very clear vision of how he wanted By The Way to sound. In his mind, half the songs would be steeped in melodies and the other half would reflect the influence of classic British punk bands such as The Damned and Discharge. However, since producer Rick Rubin was unfamiliar was with those artists and their style of music, he encouraged the band to pursue their more melodic ideas. But with the focus landing almost entirely on the guitarist’s material, not everyone in the band was especially happy at being overlooked during the process.

Bassist Flea was keen to pursue a more funk-laden approach throughout the By The Way sessions, and was more than a little put out at Frusciante’s songwriting dominance. But it wasn’t just a clash of musical vision that got the bass player’s back up. As he would later lament to Q magazine during promo for Stadium Arcadium, “John went to this whole level of artistry. But he made me feel like I had nothing to offer, like I knew shit.” A clash of egos is generally followed by fractured relationships, and it was a situation that caused the long-time Chili Pepper to nearly quit the band. Flea admitted it was only the idea of breaking the news to Kiedis that stopped him.

Any of Flea’s frustrations, however, appear to have been channelled into By The Way’s fiery title track. The frenetic, funk-laden album opener is perhaps the closest the Chili Peppers came to honouring their roots this time around, and is one of the few songs on the record in which the bassist’s exceptional four-string gymnastics take a front seat. For the most part, though, what shines brightest on this album is Frusciante’s new-found appreciation of complex songwriting techniques – a reflection of having immersed himself in the worlds of The Beatles and The Beach Boys throughout the songwriting and recording process. It’s all refracted through the Chili Peppers’ unique and eclectic punk-funk lens, of course, but here it’s a game played by four men facing middle age and all the responsibilities that come with adulthood.

Sure, the music leaned heavily into melodies and harmonies, and, over all, By The Way is a more laidback affair than the group’s previous releases. But funk, ska and punk still raise their heads on the likes of Can’t Stop, Throw Away Your Television, On Mercury and Minor Thing. The band also fished from the same pond that produced Blood Sugar Sex Magik’s Under The Bridge, coming up with the delicate Dosed, I Could Die For You, The Zephyr Song and Tear.

Kiedis, too, displays a more self-reflective approach to his lyrics. Now grown up, rather than partying on anyone’s pussy, he was more prone to express his feelings about love, falling in love and being in love. A little over a year sober before the By The Way sessions began, the vocalist was also unashamed to address his relationship with addiction, and the regrets he carried from his struggles with heroin – “On the day my best friend died/I could not get my copper clean” was a direct reference to how he missed deceased Chili Peppers guitarist Hillel Slovak’s funeral due to getting high.

Though Frusciante is seen as the driving force behind By The Way, the process wasn’t dominated by ego. What takes precedent here is the musicality, experimentation and creativity of a band at its peak. Not once does the guitarist fight for prominence, and what emerged upon release, on 9 July 2002, was one of the most rounded, versatile and exceptional albums in the Chili Peppers’ catalogue. “Like Californication, writing By The Way has been one of the happiest times of my life,” Frusciante told Total Guitar. “It’s been a chance to just keep on writing better songs and improving my guitar playing.”

He added, “I know what Anthony and Chad [Smith, drummer] and Flea have said, but I think of it more as a band effort. I do put a lot of energy into everything, sure, but I don’t underestimate that the real energy comes from the four of us. That’s number one over any of our individual efforts.”

With any ill feelings put aside for the sake of such a formidable record, Smith described By The Way as a collection of “very honest, raw, emotional music. It’s a very dynamic, rich and lush album. Probably the best collection of Chili Peppers songs we’ve ever put out.”