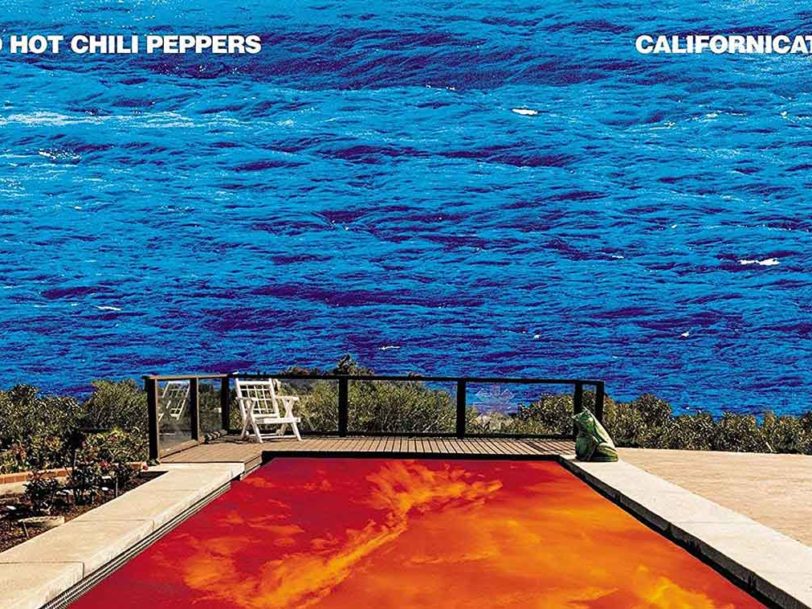 Exposing the nightmare at the heart of California dreamin’, Red Hot Chili Peppers’ ‘Californication’ found them in an introspective mood.

Through the mid-90s, Red Hot Chili Peppers’ rebellious antics had grown to cartoon-like proportions. Performing on stage while wearing flaming helmets, and turning up for photo shoots wearing nothing but socks… on their penises… the group’s frat-house humour had been a defining element throughout their career. With their 1999 album, Californication, however, the group began to show a more mature, serious side.

While writing the songs that would eventually make up Californication, Chili Peppers’ frontman, Anthony Kiedis, and guitarist John Frusciante spent the summer of 1998 reflecting on their personal struggles with addiction. Kiedis later said their goal was to “tell tales of wandering souls who’ve lost their way searching for the American dream in California”. With six out of the album’s 15 songs mentioning The Golden State, they made their intensions clear from the outset.

Explosive album opener Around The World kicks things off in classic Chili Peppers fashion: Flea lays down a funky bassline while drummer Chad Smith holds things together with intricate kit work. Meanwhile, Kiedis’ hip-hop-inflected verses are broken up by a melodic chorus. According to the singer, the lyrics were inspired by his own travels, as well as Roberto Benigni’s 1997 film, Life Is Beautiful. Released as the second single from Californication, Around The World peaked at No.7 on the Billboard Modern Rock Tracks chart and has since become a staple in the group’s live performances. Updating the sound of West Coast rock for the alt-generation, it also found a second life in the late 2000s, when a remix of the song briefly soundtracked Disney California Adventure Park’s California Screamin’ rollercoaster.

Scar Tissue, however, is where the band’s newfound introspection came to the fore. With lyrics that contemplate the isolation that comes from drug addition, the song tosses the group’s typical funk sound into a minor key and gives it a more minimal, plucked-guitar arrangement. According to Kiedis, the stripped-back sound was a result of Frusciante having taken a break from playing the guitar while he was getting sober.

Released as Californication’s first single, Scar Tissue signalled the more mature, melodic direction the Chili Peppers were taking, while the video saw them ditch the comic antics for a drive through the desert in a beat-up car with the top down. Directed by Stéphane Sednaoui, the clip perfectly captured the feeling of the song’s chorus – “With the birds, I’ll share this lonely viewin’.” One of the best Red Hot Chili Peppers songs, it spent 16 weeks at the top of the Hot Modern Rock Tracks chart and also became an international hit, reaching No.1 in Iceland, No.3 in New Zealand, No.4 in Canada, and No.15 in the United Kingdom. After Snoop Dogg guested with the group for a performance of the song at the 1999 Grammys, Scar Tissue went on to win the Grammy for Best Rock Song at the following year’s ceremony.

Picking up from where Scar Tissue left off, Californication’s third single, Otherside, more directly confronts the subject of heroin addiction. Written with the fatal overdose of founding Chili Peppers guitarist Hillel Slovak in mind, the song discusses mental triggers, denial and the terrors of dependence, with Kiedis singing, “I yell and tell it that it’s not my friend/I tear it down, I tear it down/And then it’s born again.” Further underscoring the cyclical nature of addiction, directors John Dayton and Valerie Faris framed the band in a surreal, German expressionism-inspired fever dream setting for the promo video.

The word “Californication” is a portmanteau combined from “California” and “fornication”. Bringing this to the fore on the album’s title track, Kiedis sings about the sex-driven entertainment industry – music, movies, and the people who wish they were in them – and its destructive forces. “And Cobain, can you hear the spheres singing songs off Station To Station?” Kiedis sings to the late nirvana singer, Kurt Cobain, while referencing the album that arose from David Bowie’s own troubled stay in Los Angeles. “And Alderaan’s not far away, it’s Californication,” he adds, as if equating Hollywood with Princess Leia’s doomed home planet in Star Wars.

Though a career highlight, the song almost didn’t make the album – Kiedis had the lyrics, but the group struggled to find a sound that suited them. After Frusciante took a visual approach to writing the music – playing it as he pictured it – the track came together, complete with one of the most recognisable intros of all time, as the guitarist switched between plucked A minor and F chords. Continuing their run of inventive music videos, the band again hired Jonathan Dayton and Valerie Faris, who depicted the individual members in an open-world video game, with Chad Smith snowboarding on the Golden Gate Bridge and Kiedis driving through city streets. Taken together, the song marks a moment in pop-culture history where all forms of entertainment become tangled up in “Californication”.

Bringing the album to a close, Road Trippin’ remains one of Red Hot Chili Peppers’ most underrated songs, with lyrics inspired by a trip that Kiedis, Flea and Frusciante took to surf at Big Sur. A largely acoustic number, Frusciante’s folky guitar work is accompanied by a Chamberlin organ, creating a slightly orchestral, psychedelic feel. Putting the Chili Peppers’ own spin on The Byrds or The Beach Boys’ era-defining West Coast sound of the 60s, the song ends Californication on an optimistic note.

Released on 8 June 1999, Californication revealed California’s seedy underbelly while also adding to the West Coast’s near-mythical legacy. With its mix of seriousness (delicate tunes such as Porcelain) and silliness (Emit Remmus, I Like Dirt), the album marked a fresh chapter in Red Hot Chili Peppers’ career, even as it offered a warning: California dreamin’ can so easily slip into a nightmare existence.