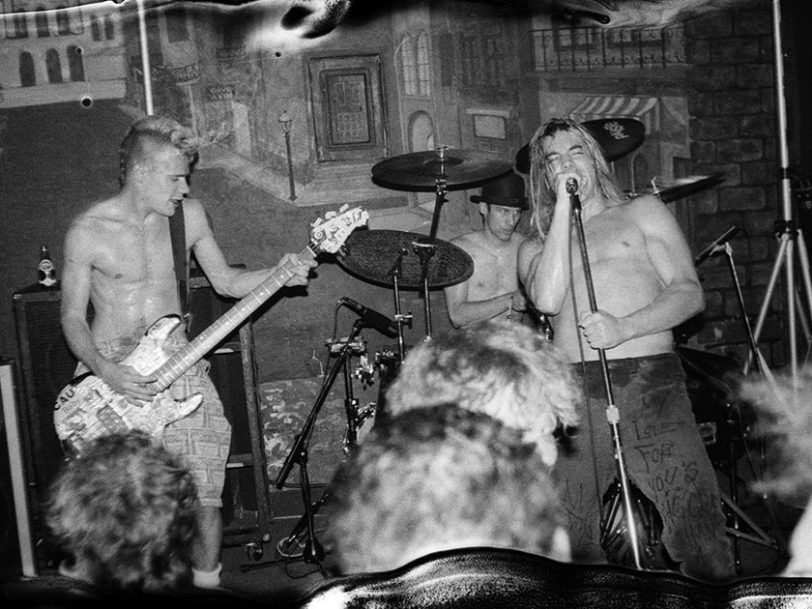 Red Hot Chili Peppers’ self-titled debut album tends to be a misunderstood entry in their sprawling body of work. Recorded during an especially chaotic period early in the group’s career, it sold miniscule amounts on release, yet its importance shouldn’t be underrated. Arguably the first album to successfully fuse punk, funk and rap music, it established the Chili Peppers on the all-important US college radio network in the summer of 1984, enabling the group to take their first steps on the long road to the mainstream stardom they finally attained with their fifth album, Blood Sugar Sex Magik.

Listen to the best of Red Hot Chili Peppers’ here.

The story of how Red Hot Chili Peppers’ debut album came to be is somewhat convoluted. The group’s original line-up of Anthony Kiedis (vocals), Hillel Slovak (guitar), Michael Balzary (aka Flea, bass) and drummer Jack Irons came together while the four were classmates at Fairfax High School in Los Angeles, but they initially traded under joke names, playing their first gig as Tony Flow And The Miraculously Majestic Masters Of Mayhem to around 30 friends and associates at LA’s Rhythm Lounge. They only had one song at this early stage, but they got a little more serious when – to their surprise – the club’s owner invited them back for a second gig.

The fledging band gradually morphed into a proper act during the summer of 1983, changing their name to the much more memorable Red Hot Chili Peppers along the way. They played a few more shows on the LA club circuit before laying down six songs for their first demo, at a tiny studio on Hollywood Boulevard. To everyone’s surprise, their internal chemistry was already apparent during that first session.

“Those demo sessions were by far the most productive and inspired recording that we’ve ever done,” Anthony Kiedis enthused in his memoir, Scar Tissue. “In the last 20 years, we’ve never once hit a moment where there was as much magic and oneness happening. We were in the zone. Everything was recorded in one take, and everything was perfect.”

“The new songs all sounded exciting and great”

The Chili Peppers’ initial demo included tracks such as Police Helicopter and Green Heaven – songs which would later become staples of their debut album proper. That first recording also revealed that the band’s signature sound, a highly original fusion of angular, James Chance-esque funk and hardcore punk, topped off with Kiedis’ rap-infused vocal delivery, was already the real deal, even at this embryonic stage.

The quality of the demo was instrumental in the band’s manager, Lindy Goetz, striking the group a seven-album deal with EMI America in November 1983. But the celebrations were muted as problems had already arisen. Before the Chili Peppers got serious, Hillel Slovak and Jack Irons had already pledged themselves to their other band, What Is This?, and had signed with MCA two weeks before the Chili Peppers’ EMI deal had come through. Accordingly, the pair left the Chili Peppers in December 1983, just as the group began to think of recording their debut album.

“Our sound was based on the drumming of Jack Irons and the guitar playing of Hillel Slovak,” Kiedis recalled in Scar Tissue. “It wasn’t like these were incidental guys, they made up our vibe. We were kids from high school, we were a team, you can’t go shopping for a new mom and dad… I was thinking, OK, my life is over, my cause is lost.”

While Flea felt similarly, he was more pragmatic. As they now had a record deal, Red Hot Chili Peppers’ debut album had to be the priority, and the bassist already had a replacement drummer in mind, Cliff Martinez. Having served time with LA punk outfits The Dickies and The Weirdos, plus a spell with cult icon Captain Beefheart, Martinez was well placed to occupy the Chili Peppers’ drum stool.

Recalling that Martinez “could do a variety of styles and do them all well”, Kiedis agreed that the group had found the ideal drummer. Replacing Hillel Slovak, though, proved much more difficult until an ongoing series of auditions finally led the group to Jack Sherman.

“He’d come in with a huge smile, and he didn’t look very cool when he was jamming,” Kiedis later wrote of the guitarist, who died in August 2020. “But he locked right in with Flea and Cliff… and it wasn’t a struggle for them to find each other and so there was an actual musical flow… He wasn’t the raw, explosive hellcat of funk we were looking for, but he’d definitely be capable of going into the studio and putting down these parts, so we hired him. That was a moment of celebration, because now all the pieces were there.”

With the new Chili Peppers team in place, the band also had to decide on a producer, and as far as Flea and Kiedis were concerned, there was only ever one contender.

“Flea and I both, without hesitation, recommended Andy Gill, the guitar player from Gang Of Four,” the singer wrote in Scar Tissue. “Their first album, Entertainment!, was what had inspired me… The music was so angular and hard and edgy, the epitome of that English art-school funk.”

Despite their ringing endorsement, Flea and Kiedis were less than enamoured with Gill’s production input. The two parties were effectively chalk and cheese, and the tension that arose between them during the sessions has been well documented. However, while Kiedis has admitted that “Andy was going for a clean sound that wasn’t us”, time has tempered his thoughts on the Red Hot Chili Peppers’ debut album sessions.

“I do remember bursts of happiness during that period,” he later recalled. “The new songs like Buckle Down, True Men [Don’t Kill Coyotes], Mommy Where’s Daddy and Grand Pappy Du Plenty all sounded exciting and great. But I was terribly disappointed when I heard the mixes of Get Up And Jump, Out In LA, Green Heaven and Police Helicopter… It became a real battle to make the record.”

“This is our first record, let’s keep marching on”

Regardless of their dissent, Red Hot Chili Peppers’ debut album had plenty going for it. Bearing in mind the new-look band had only enough time to spend a few weeks rehearsing before the sessions, they showed admirable tightness throughout, ensuring that most of the songs were executed with skill and finesse.

The likes of Get Up And Jump and the virile True Men Don’t Kill Coyotes effectively drew up the blueprint for the itchy, heavyweight punk-funk the band would make their own over the next five years, though the angular, stuttery post-punk of Out In LA and the proto-thrash of Police Helicopter showed that Flea and company had plenty more strings to their bow.

Elsewhere, the furious rhetoric of Green Heaven (“We assume the position to sell the ammunition/What the fuck, it’s the American tradition/Along with goin’ fishin’, apple pies in the kitchen/Isn’t it bitchin’, seein’ dead men in ditches?”) arguably sounds even more prescient now, while the eerie closing track, Grand Pappy Du Plenty – a menacing, soundtrack-like instrumental which gradually becomes buried beneath an avalanche of sounds effects from Sherman – confirmed that the Chili Peppers would be nobody’s one-trick ponies.

As with many similarly groundbreaking records, Red Hot Chili Peppers’ debut album picked up little commercial traction upon its release on 10 August 1984. However, it did the heavy-lifting for the band, introducing them to college radio in the US, and also to MTV thanks to the Graham Wiffler-directed video for the album’s lead single, True Men Don’t Kill Coyotes. Yet the record’s true value is in its longevity. It’s now widely cited as the first punk-funk (or funk-metal) album, appearing a whole 15 months ahead of Faith No More’s similarly inclined We Care A Lot, and almost four years before Living Colour’s double-platinum-selling Vivid thrust the genre into the mainstream.

“I felt like we had landed between two peaks, in the valley of compromise,” Anthony Kiedis later said of Red Hot Chili Peppers’ debut album. “I wasn’t ashamed of it, but it was nothing like our original demo tape. Still, our take was, ‘OK, this is our first record, and let’s keep marching on…

“I couldn’t put too much spin on what writers had to say about out music,” he furthered. “We had the yin and yang of record reviews. At any rate, we were being acknowledged.”