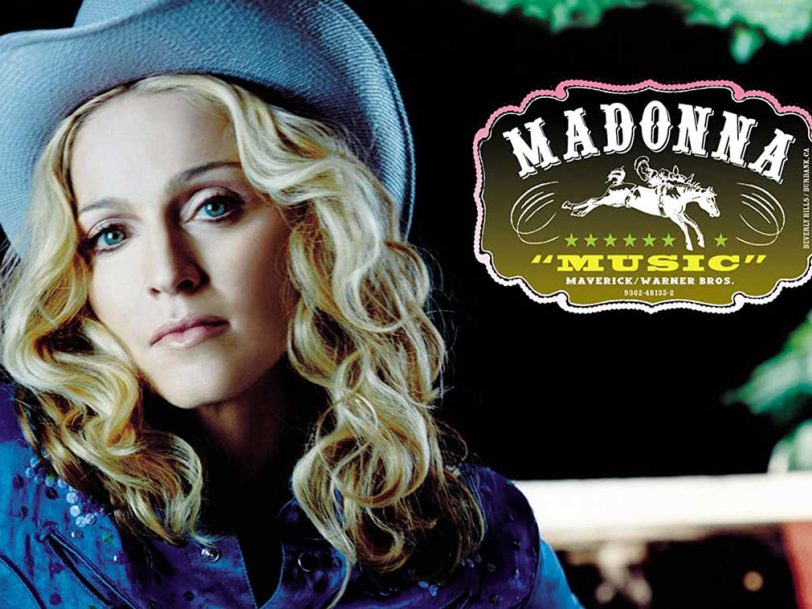 Music: Making The People Come Together Over Madonna In The 2000s

With the ‘Music’ album, Madonna proved the new queens on the block had little chance of catching her critical and commercial momentum.

Much was riding on the release of Madonna’s eighth album, Music. After the triumphant success of it’s predecessor, 1998’s Ray Of Light, expectation for the singer’s follow-up was sky-high, with fans eager to see how she would continue to assert her relevance in the new millennium.

Issued on 18 September 2000, Music answered that question and, matched by her personal circumstances (she would marry English film director Guy Ritchie in December that year and largely relocate to his homeland for a while), furthered Madonna’s immersion into European culture. But if Ray Of Light’s textured electronica, created with British producer William Orbit – who would work on three of Music’s songs – was dense and revealing, this new album was lighter and altogether more direct, with a sharp, jittery vibe that largely pitched her sound back towards the clubs.

“I feel free to take risks”

Madonna’s principal collaborator on Music was the Swiss-born producer Mirwais, who spoke little English but helped the singer create some of the most urgent, rhythmic material of her career (he would also go on to helm her subsequent American Life album and hone some of the madcap character of 2019’s Madame X).

In Music’s title track, the pair created a global chart-topper and one of the best Madonna songs of the era (it’s video, featuring Ali G, now stands as something of a period piece). The club smash Impressive Instant is more of the same, with its unconventional vocoder effects adding to the sense that the Music album evolved in a free-form way in which creative instinct outpaced more considered formulas.

But dance bangers don’t entirely capture the scope of the Madonna-Mirwais alliance. I Deserve It is a synthesised folk ballad and Nobody’s Perfect is a midtempo moment as eccentric as anything as Madonna had recorded to date. The latter song maintains her exemplary grasp of melody, but Madonna admitted it was a gamble. “I’ve been popular and unpopular, successful and unsuccessful, loved and loathed, and I know how meaningless it all is, therefore I feel free to take risks,” she told ELLE magazine at the time.

Continuing the William Orbit collaboration, Amazing is a vibe-y dance cut, while Music’s second single, Don’t Tell Me, based on a song by her brother-in-law Joe Henry (who earned a co-writing credit) and shaped by Mirwais, invented the country-electronica genre almost overnight, and helped set the visual tone for the record as a whole. Gone takes a gentler step in this direction: an earthy, almost Carole King-like cut, it is as unrecognisable a Madonna track as it would have been possible to imagine 15 years earlier.

Guy Sigsworth’s delicate What It Feels Like For A Girl offers an album highlight, draping a sweet melody around one of Madonna’s strongest vocals on record. It was souped-up in a remixed form to support a later single release, and then-husband Guy Ritchie directed its video, which some stations decided was just a bit too violent for widespread airing.

Music’s safest moment comes on the Orbit-produced Runaway Lover, while the vocoder-heavy Paradise (Not For Me) is closer to Ray Of Light’s brooding introspection, but was produced again by Mirwais. Most editions of the album also came with Madonna’s then- recent British chart-topper American Pie, created to promote her movie The Next Best Thing, as a bonus track.

Issued in the only Madonna album cover shot by French fashion photographer Jean-Baptiste Mondino, Music enjoyed Madonna’s best US first-week sales to date (almost half a million) and, with a string of intimate promotional shows and an imminent world tour, continued to sell strongly for the next 18 months, securing more than 60 weeks on the British listings and becoming her first US chart-topping album since Like A Prayer.

The reigning “Queen Of Pop” had proved again there was nothing that could disrupt her winning formula, and that the new pretenders to the throne – Britney Spears, Christina Aguilera – had little chance of matching her critical and commercial momentum. Another creative high point, the Music album also left industry executives in awe at Madonna’s ability to stay one step ahead of the market. As its anthemic title track says: music makes the people come together, and, at the start of the new century, they were still all heading in Madonna’s direction.