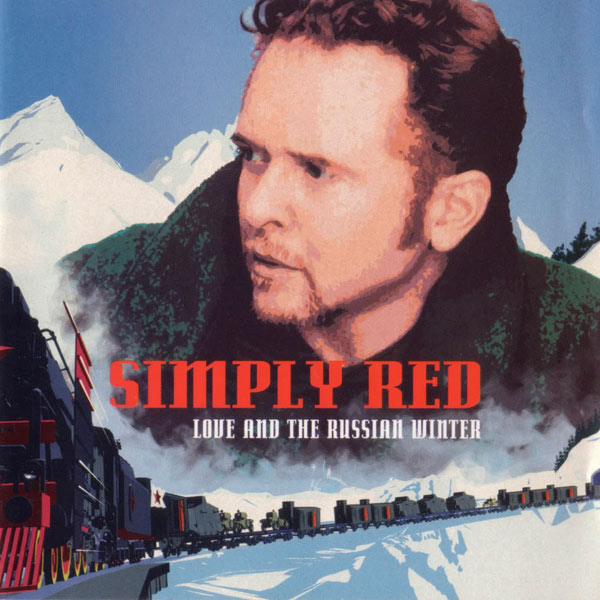 ‘Love And The Russian Winter’: Behind Simply Red’s Chill-Out Comedown

A heartwarming mix of dance-pop and jazz, Simply Red’s ‘Love And The Russian Winter’ is a testament to the group’s refusal to play it safe.

Released as the 90s came to a close, Love And The Russian Winter found Simply Red freshening up their pop-soul sound by branching further out into electronic dance music. With the chill-out scene soundtracking a comedown from the hedonism of 90s dance culture, it found a sonic bedfellow in Mick Hucknall’s reflective songwriting. Pondering the turn of the millennium on Love And The Russian Winter, the singer closed the decade with a collection of mood-altering EDM and jazz-tinged melodies.

Listen to ‘Love And The Russian Winter’ here.

“Soul music is the common denominator”

By 1999, Simply Red’s line-up had gone through significant changes. Following the departures of guitarist Heitor Pereira, keyboardist Fritz McIntyre and longtime producer Stewart Levine, the only connections left to the early-90s ensemble that had recorded the gargantuan Stars album were saxophonist Ian Kirkham and Gota Yashiki, who had rejoined the group on production duty. Andy Wright – Hucknall’s songwriting partner since 1995’s Life – had begun to take on a larger creative role, and together they assembled a group of new musicians to scope out Love And The Russian Winter.

“I didn’t completely neglect my work,” the usually hands-on Hucknall later said of the sessions, “but I did basically give it to Andy and Gota.” Relying on his producers to make the songs more club-friendly and attuned to trip-hop and downtempo trends, however, ensured that Love And The Russian Winter’s spirit of ambition and temerity widened Simply Red’s musical reach into the DJ booths and chillout rooms.

“I said ‘love’ because that’s eternal”

Pointing the way to Simply Red’s new musical adventure, the album’s lead single, Ain’t That A Lot Of Love, was released in October 1999. A house-inflected spin on Homer Banks’ 1968 Northern soul favourite – fondly regarded by soul-music obsessive Mick Hucknall as a lesser-known album track by Stax duo Sam & Dave – it wasn’t the first time Hucknall had recorded the song. Earlier that year, Welsh pop legend Tom Jones had invited the singer to record a brass-heavy duet of the track for his own 1999 album, Reload. “I feel that he loves the same kind of music as me,” Tom Jones later said. “Soul music is the common denominator between us.”

Simply Red’s version, however, aimed to do something completely different. Taking a cue from contemporary house bangers such as Stardust’s Music Sounds Better With You and Armand Van Helden’s You Don’t Know Me, Hucknall’s update of Ain’t That A Lot Of Love transformed the soul curio into a club-friendly floor-filler, benefitting hugely from a felicitous remix from Turn Around dance duo Phats & Small. The single peaked at No.14 in the UK, charting the course for the group’s more EDM-inspired route.

“I even dabbled with a bit of techno”

Love And The Russian Winter followed on 2 November, surprising many with its unusual title and its equally perplexing artwork. With Hucknall staring pensively to his right, it features a digitally recreated depiction of a Russian train on the Trans-Siberian Railway, set against a snowy, mountainous landscape. “It was loosely based on Dr Zhivago and was to do with the new millennium,” Hucknall later said. The album title itself was inspired by two things the singer felt had defined the previous century: “I said ‘love’ because that’s eternal, and ‘the Russian winter’ because without that the shape of our society would have been very different, when you think of Stalingrad and the Napoleonic Wars.”

Throughout the 90s, Mick Hucknall had always professed his interest in and respect for dance music, but rarely had it crept so overtly into his music until Love And The Russian Winter. On album opener The Spirit Of Love, he sings gently of love as the great equaliser, as the song builds slowly into a soft techno beat replete with bongos and a melody fit for Ibiza’s Café Del Mar. By the time the song adds flourishes of Latin-flavoured acoustic riffs and jaunty flutes, it’s clear this album will be a much deeper dive into contemporary clubland than the band had ever attempted before.

Produced by AGM – the acronym for Andy Wright, Gota Yashiki and Mick Hucknall himself – Love And The Russian Winter found Wright and Yashiki reaping dividends from their combination of Soul II Soul’s upbeat R&B with Everything But The Girl’s dance-pop acuity. Eclectic and refreshing, the album adapts Hucknall’s songwriting to the late-90s terrain of chilled-out electronica and downtempo mood explorations, as on the trip-hop-inspired groove of Close To You.

Meanwhile, the spiralling synths, twinkling piano and walking bassline of The Sky Is A Gypsy portrays Hucknall as a vagabond searching for his muse while reflecting on the nature of stardom (“It’s hard to learn to beware/Spending thousands of pounds in a year/And worthwhile, is it worthwhile?”). Returning to upbeat techno-pop, the driving acoustic hook of the spiritual Back Into The Universe sees Hucknall ponder the existence of God, philosophising about the future of the human race (“The order’s truly random in the universe/And where will we be in a thousand years?/Soothingly searching to allay our fears”).

The second and final single to be released from Love And The Russian Winter was the genial ballad Your Eyes, aided by a cinematic promo video directed by Mike Lipscombe. Set in Soviet Russia during the Second World War, it featured Hucknall as a shady train commuter who is almost packed off to a gulag by a female KGB agent for not having the right identification papers. In a flashback scene to Moscow circa 1938, we discover that the pair once shared a passionate love affair and, in the spur of the moment, she decides to let him off. All is fair in love and war, it seems, and the song went on to peak at No.26 in the UK.

Elsewhere, the near-spoken-word intro to Words For Girlfriends unfolds into an acoustic-led love song which aims to soothe the soul, while the gleaming guitar riff on Thank You recalls Simply Red’s 1991 hit single Stars, with Hucknall expressing his deeply-felt gratitude to a lover. Also, no Simply Red album would be complete without a flirtation with reggae; on Love And The Russian Winter, that honour belongs to More Than A Dream, which oscillates blissfully to a dubby bassline and a joyously uplifting chorus.

Though best appreciated as a collection of songs rather than an overarching concept album, Love And The Russian Winter isn’t afraid to tackle weighty philosophical themes. Man Made The Gun uses the close of the millennium as an opportunity for Hucknall to recount humanity’s violent past, referring to the invention of the gun as “a sado-sexual machine” and decrying the mass slaughter caused by the atomic bomb (“While there is evil in this world/We try to save our boys and girls”). Closing the album with the slow ballad Wave The Old World Goodbye, Hucknall offers hope that the onset of a new era will set us on the road to peace.

Selling over 300,000 copies and reaching No.6 in the UK, Love And The Russian Winter’s immaculate dance-pop fusion still holds up. If there’s anything Simply Red deserve credit for, it’s how they have, across all their albums, harnessed a broad range of genres, from R&B and funk to reggae and jazz, into their own unique sound. “I’ve even dabbled with a bit of techno, on Love In The Russian Winter,” Hucknall later said in an interview with The Sun, highlighting the album’s more experimental nature. Elsewhere, he reasserted the effort he had put into making the record: “I did a lot of work on it.”

It’s also no secret that Hucknall has always sought to make his songs palatable to fans of dance music. By allowing Andy Wright and Gota Yashiki to help him indulge in those club-oriented urges, he proved that Simply Red have never played it safe. Love And The Russian Winter is a testament to that.