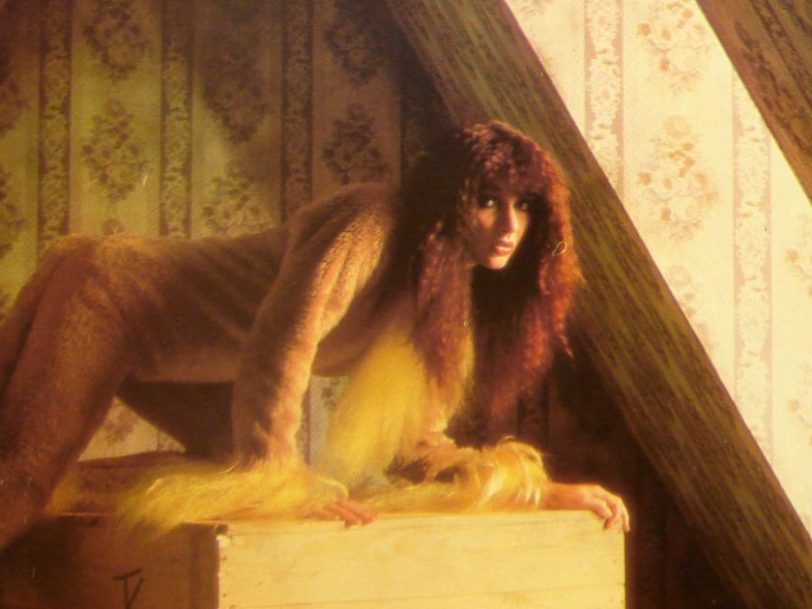 Released within a year of her debut, Kate Bush’s ‘Lionheart’ album proved she was taking ever bolder steps in pursuit of her creative vision.

Kate Bush’s second album, Lionheart, was released on 13 November 1978, just nine months after The Kick Inside, her enormously successful debut. The perfect companion piece to that first album, Lionheart largely consists of songs written before the singer found fame. Maintaining the momentum of Bush’s extraordinary start, it hit No.6 in the UK, going platinum in the process.

Listen to the ‘Lionheart’ album here.

“It’s very important for me to change and improve”

With her debut single, Wuthering Heights, Kate Bush had become the first female artist to hit the UK No.1 spot with a self-written song. It was no fluke: still a teenager when Wuthering Heights was released, she’d written prolifically since the early 70s and had demoed plenty of strong material to carry over to Lionheart. Talking to Tune-In magazine in 1978, Bush suggested that she considered songwriting her calling in life. “Writing songs is what I’m good at and I really do feel it’s what I’m meant to do. What I’m here for,” she said. “I can’t think of anything else that would be as fulfilling, and I would be happy to be just a songwriter, full stop. But there are always new beginnings. As soon as you climb one wall, there’s another wall to climb.

“The first album was a showcase, a foot in the door if you like, and it’s very important for me to change and improve,” Bush continued. “I think I can be reasonably objective about my own work and I was lucky to get the songs together for Lionheart.” Reflecting on her creative process at this stage in her career, she noted, “There are no special themes because I always treat each song as a separate entity and work on them one at a time, but I think many other songs are much more uptempo. I love rock songs but normally they’re just three chords and I don’t believe in that sort of writing. I like a really strong melody line, and that was a technique to learn but l seem to have cracked it. It’s pleased me, anyway.”

“You didn’t feel like you were working. It was really, really fun”

With songs selected and arrangements ironed out, Bush arrived at Super Bear – a residential studio in Nice, on the South East coast of France – for ten weeks of sessions over the summer of 1978. Joining her were producer Andrew Powell (who’d helmed The Kick Inside), Bath and Palmer, from The KT Bush Band, Bush’s multi-instrumentalist brother Paddy, and a host of session stalwarts. Three new songs – Symphony In Blue, Fullhouse and Coffee Homeground – joined the songs that the band had demoed back home.

In a promotional interview for Lionheart that was distributed on cassette, Bush enthused about the sessions while pointing out some of the occupational hazards of recording while surrounded by beautiful countryside. “It was an amazing experience. I mean, it’s the first time I’ve ever recorded out of the country,” she explained. “And the environment was really quite phenomenal, I mean it was just so beautiful, it was so unlike anything I’d seen for a long while. And I think there were so many advantages to it, but there were a couple of disadvantages – the fact that it was so beautiful, you couldn’t help but keep drifting off to the sun out there, you know, that sort of thing. But you just didn’t feel like you needed a break, because the vibes and the weather and everyone around was just so good, you know, you didn’t feel like you were working. It was really, really fun.”

“I want to break away from what has previously gone”

Despite the distractions, Bush and her band worked quickly on a collection of songs that addressed sensitive subjects far beyond the singer-songwriter’s years. The fast-developing songwriter was keen to show the world that there was more to her than The Kick Inside, as she told Melody Maker in 1978: “I want to break away from what has previously gone. I’m not pleased with being associated with such soft, romantic vibes, not for the first single anyway. If that happens again, that’s what I will be to everyone.”

Lionheart’s subject matter was often edgier than that of its predecessor. Kashka From Baghdad can be interpreted as a story of forbidden homosexual love in the Middle East (“Kashka from Baghdad/Lives in sin, they say/With another man/But no one knows who”). In Search Of Peter Pan explores loss of innocence – accidental or otherwise. The song is “sorta about childhood”, Bush explained. “And the book itself is an absolutely amazing observation on paternal attitudes and the relationships between the parents – how it’s reflected on the children. And I think it’s a really heavy subject, you know, how a young innocent mind can be just controlled, manipulated, and they don’t necessarily want it to happen that way. And it’s really just a song about that.”

Meanwhile, Symphony In Blue veers between thoughts on religion and sex: “The more I think about sex, the better it gets/Here we have a purpose in life/Good for the blood circulation/Good for releasing the tension/The root of our reincarnations,” Bush sings. And Wow dissects the hollowness of fame, as Bush wrote in a fan club newsletter sent out in the summer of 1979: “Wow is a song about the music business, not just rock music but show business in general, including acting and theatre. People say that the music business is about rip-offs, the rat race, competition, strain, people trying to cut you down, and so on, and though that’s all there, there’s also the magic.”

Theatre infused Coffee Homeground in a different way: sounding like a showstopper from the cabaret clubs of Weimer Germany, the song has an extraordinary lyric. During her cassette interview, Bush suggested that “it’s just a song about someone who thinks they’re being poisoned by another person, they think that there’s Belladonna in their tea and that whenever they offer them something to eat, it’s got poison in it. And it’s just a humorous aspect of paranoia really.” She had achieved her goal with Lionheart – “soft, romantic vibes” were certainly in short supply.

Musically, too, Bush’s horizons were expanding, laying the groundwork for what would become some of the best Kate Bush songs in the years that followed. The album’s near-title track, Oh England My Lionheart, is a pastoral hymn to her homeland, with prog flourishes courtesy of Francis Monkman (Curved Air) on harpsichord and Richard Harvey (Gryphon) on recorder. It’s a fitting soundtrack to a lyric studded with evocate imagery of Englishness, from Shakespeare and the ravens of Tower Bridge to post-World War II trauma. Lionheart’s second single, Wow, owed a debt to the pulsing soundscapes of Pink Floyd and featured a skyscraping chorus that helped it hit the Top 20 in the UK and Ireland. And Don’t Push Your Foot On The Heartbrake gave a glimpse of Kate Bush as a frontwoman for a rollicking pub-rock outfit, as in her early days playing with The KB Band.

“‘Lionheart’ is a word that could become more readily used. It’s beautiful”

The sleeve of Lionheart featured a photograph of Bush dressed in a lion suit and shot by Gered Mankovitz, known for his timeless images of The Rolling Stones and Jimi Hendrix. Bush explained the thinking behind the cover: “Well that was just an idea that we had that was basically around the title Lionheart. We wanted to get across a vibe within me of a lion.

“And for the front cover it basically comes from an idea that my brother had, which was an attic setting with me in a lion suit, so it’s slightly comical, but just a really nice vibe on the front that would take away the heavy, crusader, English vibe, because ‘Lionheart’ is always associated with Richard The Lionheart. And I think it’s a word that could become more readily used, it’s such a beautiful word. It’s kinda like ‘hero’, and ‘hero’’s a very clichéd word now. It’s used in so many songs.”

Lionheart, however, was anything but clichéd, and it marked a turning point for the singer. From her next album, Never For Ever, onwards, Bush would co-produce or produce all her work, resulting in some of the most pioneering pop music of the era, as Bush’s creative vision developed across albums such as The Dreaming and Hounds Of Love. In a bid for more control of her career, she’d also set up a publishing company, Kate Bush Music, and her own management company, Noverica. Fast becoming one of the most influential female musicians of her time, it was clear that, for Kate Bush, the sky was the limit.

Buy Kate Bush vinyl and CDs from the Dig! store.