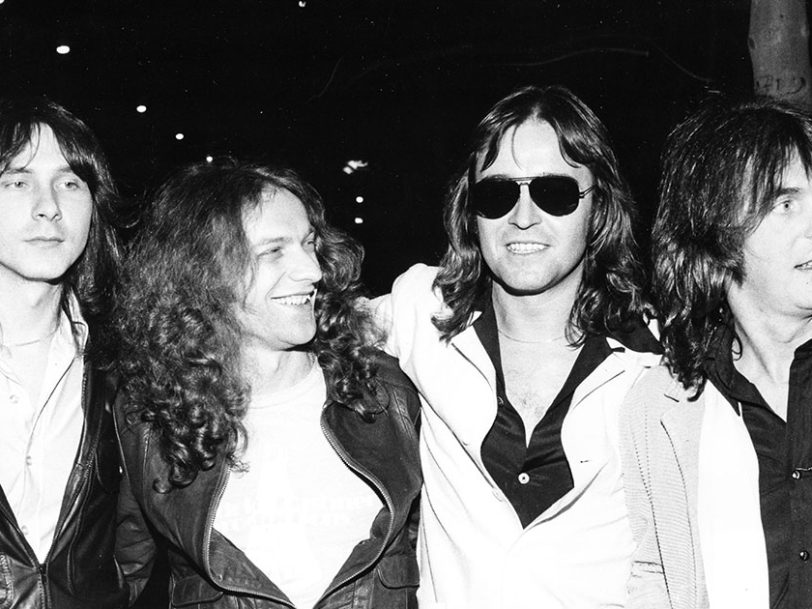 ‘Head Games’: How Foreigner Set Their Minds On A Third Classic Album

Following up hit albums raises expectations, but with ‘Head Games’, Foreigner took it all in their stride – and came up trumps once again.

Making what is often referred to as that “difficult third album” can often derail a band’s progress, but you could argue this issue never affected Foreigner – not least because they were far too busy to be ruffled. Formed in 1976 by UK-born guitarist, songwriter and former Spooky Tooth mainstay Mick Jones, the New York City-based act hit the ground running with two multi-platinum-selling albums, yet they weren’t fazed when it came to preparing a third, 1979’s Head Games.

“As amazing as it sounds, I never felt much pressure”

“It’s not a not a bad thing to have deadlines and set that kind of system up for yourself,” he added. “I think it keeps you aware. I certainly wasn’t going to let anything go through that we weren’t 100 per cent about… As amazing as it now sounds – three albums in three years – I never felt as much pressure as that schedule might suggest dictate.”

A couple of important changes within the Foreigner camp also helped the group realize Head Games without undue stress. Firstly, welcoming a new bassist into the fold altered the band dynamic for the better.

“The rhythm section that we had really yearned for”

“There was a little bit of difficulty with the communication between [drummer] Dennis Elliott and Ed Gagliardi, who was our first bass player,” Jones recalled. When long-term friend and bassist Rick Wills passed through New York, an opportunity to resolve the situation presented itself: “He gave me a call and came down to the studio and we didn’t talk specifically about him joining the band, but we did sort of start to stay in communication.”

After Wills jammed with Foreigner at Dennis Elliott’s request, Jones realised the group had found “the rhythm section that we had really yearned for”. Not only did Wills’ personality make for the right fit, but Jones – who himself had been playing bass on the majority of Foreigner’s studio sessions – finally had a bandmate who could fulfil that role.

If Jones didn’t already have enough to do, he had also co-produced Foreigner’s self-titled debut album and Double Vision with help from his multi-instrumentalist bandmate Ian McDonald. For Head Games, however, he managed to nail the services of the man he’d wanted behind the console from the off.

“There was a conscious approach to simplifying things a bit”

“On that album, we finally got Roy Thomas Baker,” Jones told Classic Rock. “He’s a very eccentric kind of guy, through his own admission. Somehow, he kept the wheels rolling really well and I think that’s what helped us achieve that album, in a relatively short space of time… He came up as an engineer originally and put the work in before calling himself a producer, which many didn’t… it requires a certain ear. So, Roy filled that and though he had an engineer, Geoff Workman, he was pretty much overseeing everything all of the time. So, it worked very well.”

Collectively, Foreigner assembled a highly consistent set of songs for Head Games. These ranged from tough yet radio-friendly rockers such as Women, Dirty White Boy and the AC/DC-esque Seventeen through to more reflective tracks such as the semi-acoustic, Beatles-esque Do What You Like and the sweeping Blinded By Science: a majestic ballad juxtaposed with lyrics (“I’m worried about the world that we live in/I’m worried about all the confusion”) which were almost Orwellian in nature. Arguably Head Games’ standout, however, was its anthemic title track, co-written by Mick Jones and Foreigner’s original vocalist, Lou Gramm.

“Lou and I were starting to really sort of gel together as a writing unit,” Jones recalled, explaining how they wrote the basis of the tune together in his apartment. “I had just bought a piano and Lou had a keyboard at his place and he’d play two-fingered riffs – and it kind of worked with me, because they were in the black keys, which I always wrote on anyway.” Mixing Rawls’ formative chord ideas with Jones’ guitar ultimately made for something that was recognisably their own, and Head Games would soon shape up into one of the best Foreigner songs of all time.

“That’s really what we intended, for it to have a little swagger to it”

Certainly, the wider public approved of where Foreigner were at when Head Games was first released, on 10 September 1979. With help from two major US Top 20 hits – Head Games and the raunchy Dirty White Boy – the album peaked at No.5 on the Billboard 200 and went platinum just four months after it first hit the racks. It’s since gone right on selling, and has now moved an impressive five million copies in the US alone. Ultimately, though, Mick Jones believes that much of the record’s enduring appeal can be put down to its inherent rawness.

“Everybody was quite high on the incredible couple of years that we had just had with the explosion of the band. So we were high on that and I think we sort of discussed that maybe we would take a bit more of a raw approach on the Head Games album,” Jones reflected. “That’s really sort of what we intended, for it to have a little swagger to it, as well… The whole thing was exciting, but that was a conscious approach to simplifying things a bit.”

Find out which ‘Head Games’ tracks made it into our list of the best Foreigner songs.