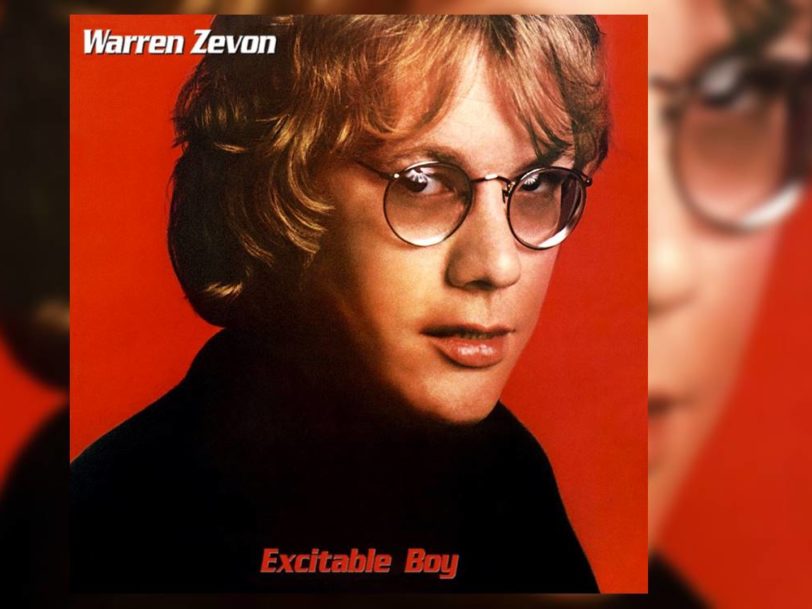 Warren Zevon’s breakthrough third album, Excitable Boy, ended up taking more than nine months to complete in 1977, partly because producer Jackson Browne was often busy touring, but also because co-producer Waddy Wachtel was working on sessions for other musicians, and Zevon was sometimes AWOL from The Sound Factory in Los Angeles, off on drinking binges.

When the album was finally released by Asylum Records, on 18 January 1978, it was worth the wait. Excitable Boy is a masterpiece of subversive, challenging songwriting, with offbeat lyrics set to memorable melodies from some of the best LA session musicians, including Bob Glaub, Lee Sklar, Russ Kunkel, Jeff Porcaro and Rick Marotta. The background singers included Browne, JD Souther, Jennifer Warnes, Linda Ronstadt, Kenny Edwards, Jorge Calderon and Karla Bonoff.

“Warren connected with the horror of our everyday lives”

The album opened with the upbeat Johnny Strikes Up the Band, before the decidedly downbeat Roland The Headless Thompson Gunner, which was about a Norwegian mercenary who fights for money in Africa, using the famous Thompson machine gun. Zevon composed the song in 1974, during a drinking session in an Irish bar on the Costa Brava.

Excitable Boy’s title track is full of Zevon’s trademark sly deadpan humour in an unsettling tale about a sociopath who ends up raping and murdering his prom date, and yet is still referred to as merely “an excitable boy”; Zevon always had telling points to make about the hypocrisy of American society.

“A dumb song for smart people”

The novelty song Werewolves Of London became one of Zevon’s most popular works and a surprise chart hit in 1978. The original idea for a song about werewolves came from The Everly Brothers’ Phil Everly – and Zevon pulled together the words and music with Roy Marinell and Waddy Wachtel. Asylum issued the song as the lead single from Excitable Boy. The track, which featured Fleetwood Mac’s John McVie and Mick Fleetwood as backing musicians, contained some unforgettable images, including that of horror-film star Lan Chaney strolling around London with the Queen. Zevon joked that it was a “dumb song for smart people”.

Accidentally Like A Martyr, which closed the first half of the album, was one of Zevon’s most passionate songs about a love affair gone sour; it found him comparing being dumped to being crucified, and was a favourite of Bob Dylan’s. Excitable Boy’s second half opened with Nighttime In The Switching Yard, written by Calderon, Lindell, Wachtel and Zevon, and which featured a catchy, disco-infused bassline that showcased Jeff Porcaro’s skill on the drums.

Wachtel said that one of the key figures in the success of the album was the engineer and mixer Greg Ladanyi, who paid tribute to the freedom he was given on Excitable Boy, which was very much a product of the pre-digital era. “Waddy and Jackson let me do my thing with the sound and the equaliser and the effects and the reverb and the placement, and then they would be very involved with the balance of instruments, and they helped with the rides,” said Ladanyi, who was also credited with playing bells on Nighttime In The Switching Yard. “We didn’t have computers back then, so we needed hands on the board to move faders.”

“He said in few words something with great depth”

The historical song Veracruz reflected Zevon’s passion for Mexican culture, while Tenderness On The Block was a moving coming-of-age song about a young girl’s first love, and was co-written with Browne after a wild, drunken night in which Zevon pulled the banister off the stairwell in his house. Excitable Boy ended with Lawyers, Guns And Money, in which a desperate, down-on-his-luck narrator writes to his father from Honduras with a plaintive plea: “Send lawyers, guns and money/The shit has hit the fan.” From its brilliant opening about a waitress and Russians, and gambling in Havana, Zevon’s caustic rocker – featuring Kenny Edwards on bass and Rick Moratta on drums – is full of biting, twisted humour. Given a slowed-down arrangement for later live performances, the song would provide a highlight of Zevon’s 1980 live album, Stand In The Fire.

In 2003, shortly after Zevon’s death at the age of 56, Jackson Browne gave a fulsome tribute to the master songwriter, telling Rolling Stone about Zevon’s “self-destructive” personality. “He sang and joked about things that no one had joked about before, like Excitable Boy. But he could say in a few words something with great depth,” said Browne. “His songs were like cartoons. His songs were tuneful and fun, like the humour of the melody of Excitable Boy. It’s sort of like Whistle While You Work – mindless whistling while you’re singing about a murderer. Warren connected with the horror of so many things that go on in our everyday lives, that are visible on our televisions every day. His songs were like short stories.”

Excitable Boy was the highest-selling album of Zevon’s career. A remastered edition, released in 2007, included one of the 58 alternative takes of Werewolves Of London, a 50-second solo version of a sardonic song called I Need A Truck, and the songs Tule’s Blues and Frozen Notes.