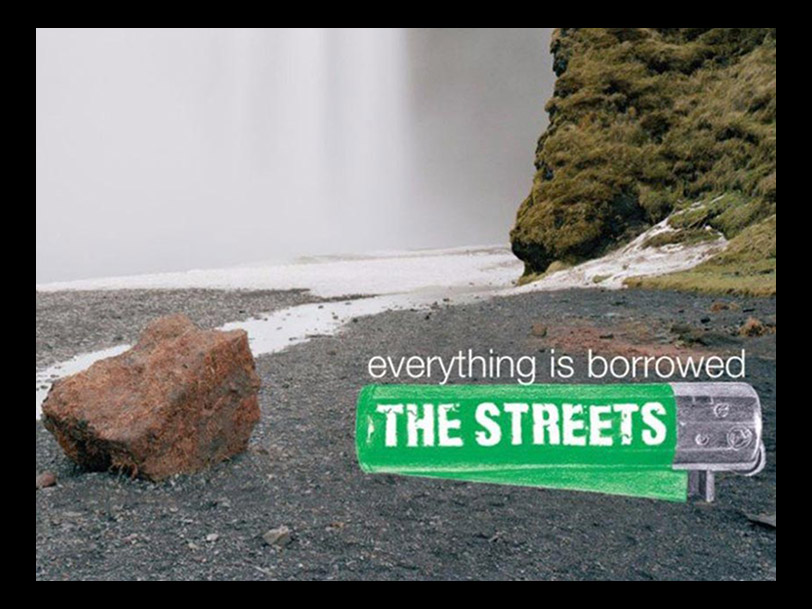 The fourth album by genre-bending UK rap act The Streets was the succinct Everything Is Borrowed. Though mixed by UK garage legend Mike Millrain, who had also played a part in the group’s third record, 2006’s The Hardest Way To Make An Easy Living, it is almost completely dislocated from their garage roots, featuring as it does the Czech FILMharmonic Orchestra alongside busy British harpist Camilla Pay. While The Hardest Way To Make An Easy Living had wrapped up the tale of Mike Skinner’s time in music to date – sometimes in grim detail – it also laid the groundwork for him to expand into broader matters in his inimitable, relatable way. Released on 15 September 2008 in the UK, and following on 7 October in the US, Everything Is Borrowed saw Skinner reflecting upon the maturation of Generation X, and its thematic content is even more relevant now than on first release.

Listen to ‘Everything Is Borrowed’ here.

A world in existential plight

Everything Is Borrowed begins with its title track, which was also released as a single. The video showed Skinner’s character swapping the cocaine overload of the previous album for newfound family life (“I came to this world with nothing/And I leave with nothing but love”), but with very adult problems hiding just around the corner, in the shape of the bailiffs. The single’s remix followed in the tradition of a number of Streets do-overs from their second and third albums, replacing Skinner’s vocals with those of hot grime acts – in this case Rinse, who was following in Skinner’s path but still had more to learn.

Also released as a single, Heaven For The Weather was a piano-backed, religion-themed cut which revisited themes explored on the Hardest Way standout Never Went To Church. As on that song, Skinner – who appears in the video lecturing as a self-help guru – comes across as undecided but engaged with the topic: “I want to go to Heaven for the weather/But Hell for the company.” Another piano-backed piece follows, in the shape of the spacious relationship song I Love You More (Than You Like Me). While not a single, as with many tracks on Everything Is Borrowed it was also afforded a video which, in the nascent-YouTube era, made the album one of the most visually accessible releases of its time. The indie-styled music and rapid-fire environmentally-themed raps of The Way Of The Dodo led to a particularly good clip, showing the human world in existential plight while plasticine figures did the titular dance.

Open and ahead of its time

The second Streets album, 2004’s A Grand Don’t Come For Free, included the smash hit Dry Your Eyes, which had been enlivened by a moving violin line from Gita Langley. She returned for Everything Is Borrowed as Gita Harcourt, wife of the popular English singer-songwriter Ed Harcourt (alongside Teddy Mitchell, from Skinner signings The Mitchell Brothers), on one of the album’s most lyrical numbers, On The Flip Of A Coin, whose tale of quirky parenting is not entirely dissimilar to that featured in Johnny Cash’s classic A Boy Named Sue. On The Edge Of A Cliff also features Gita, on a very open, ahead-of-its time, trumpet-accented piece about suicidal ideation, with a video which refers back to Skinner’s self-help guru from the Heaven For The Weather clip.

The indie guitar chords of Never Give In inspired yet another video – which showed Skinner literally fishing for one of the fish in the sea from Dry Your Eyes – while The Sherry End also feels like a reference back to The Streets’ earlier work, the MC still enjoying the odd brassy night out in between all the adult pain and tribulation. Religious angst surfaces again, though, on the cinematic Alleged Legends, on which Ed and Gita Harcourt feature together, with Ed on banjo.

Heading towards middle age, Skinner was comfortable enough to shed the crashing beats for Everything Is Borrowed’s most touching – and best – moment, the piano- and clarinet-fronted The Strongest Person I Know. Absurdly passed over for a single release, despite being the true successor to Dry Your Eyes – and one of the best Streets songs of all – its tale of an unnamed lover or friend who “verses their views quietly” is timeless enough to succeed if repromoted now. Disarming in its serenity, it features Ed Harcourt on mandolin, along with an effortless combination of acoustic guitar, xylophone and harp. Skinner views the song’s subject as an oasis of calm in his life, deeply valuing the “beautiful person that’s happily unchanged”, and reflecting the stillness of their gentle revelations in his music.

The languid, gospel-tinged closing single The Escapist came with a clip of Skinner on a very long walk in order to get to his happy place. Putting the years of partying to one side, he had, give or take, finally got to his destination on Everything Is Borrowed, with the realisation that “All these walls were never really there”. We come to this world with nothing, and we leave with nothing but love.

Buy The Streets vinyl at the Dig! store.