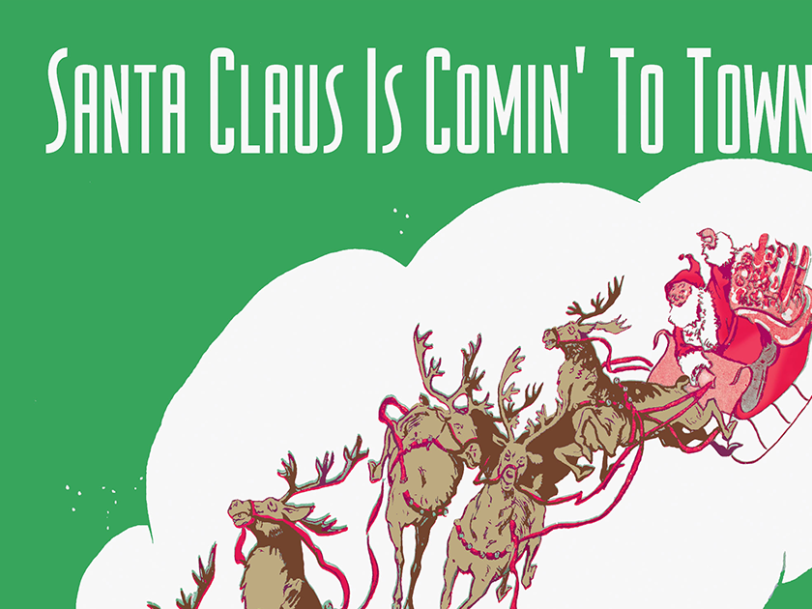 Santa Claus Is Comin’ To Town: The Story Behind The Christmas Song

Originally a 30s dance-band number, Santa Claus Is Comin’ To Town has become one of the most beloved Christmas songs of all time.

No one would dispute that Bruce Springsteen, Frank Sinatra, The Supremes, Dave Brubeck and Kylie Minogue are all major musical icons. Each has their own distinctive style and they occupy different genres, but if you look closely at their back catalogues, you’ll see that they also have one thing in common: they’ve all recorded versions of Santa Claus Is Comin’ To Town, a much-loved Christmas song which quickly gained acceptance as a Yuletide standard after its first recording in 1934. Since then, there have been over 1,100 recorded versions of the tune, by artists as varied as Bing Crosby, The Beach Boys, Jackson 5 and Michael Bublé.

Who wrote Santa Claus Is Comin’ To Town?

Santa Claus Is Comin’ To Town was the first of two collaborations between John Frederick “Fred” Coots and Haven Gillespie (the other song they wrote together was the jazz standard You Go To My Head). It was Coots, a well-regarded Broadway composer from Brooklyn, New York, who came up with the song’s infectious singalong melody, while Gillespie, a Kentucky-born lyricist who worked with many different collaborators, wrote the lyrics. Though its tone is playful and bursting with anticipation at the arrival of Christmas, the song is also vaguely threatening, warning children that Santa – depicted as an omniscient, all-knowing figure who can tell “if you’ve been bad or good” – will not reward crying, pouting or any form of unbecoming behaviour.

Who first sang Santa Claus Is Comin’ To Town?

A banjo player called Harry Reser, who led his own dance orchestra, was the first musician to record Santa Claus Is Comin’ To Town, in late 1934, with a version featuring singer Tommy Stacks. After it was performed on the much-listened-to Eddie Cantor radio show in the US – then the barometer of the North American popular taste – the song became a huge hit, both with record buyers and in sheet-music sales. A year later, trombonist and bandleader Tommy Dorsey, the man who aided Frank Sinatra’s rise to the top, helped popularise the song further.

Who else has sung Santa Claus Is Comin’ To Town?

The treacle-voiced crooner Bing Crosby, supported by the tight but fluffy harmonies of the vocal group The Andrews Sisters, took Santa Claus Is Comin’ To Town into the US charts in 1943, and in 1948, Frank Sinatra recorded a version that was sampled and repurposed by the Australian pop queen Kylie Minogue, 67 years later, on her 2015 album, Kylie Christmas; the results featured the Can’t Get You Out Of My Head and All The Lovers hitmaker singing opposite Ol’ Blues Eyes in a duet brought about by technological wizardry.

Who sings the best version of Santa Claus Is Comin’ To Town?

While Santa Claus Is Comin’ To Town has attracted many crooners (Johnny Mathis and Tony Bennett among them) as well as adult-contemporary acts (Carpenters), musicians from all areas of popular music have found a place for it in their repertoires. “The Boss”, Bruce Springsteen, repurposed it as an anthemic rock song in 1975, when he recorded it live, and in 1989, Randy Travis infused it with a Nashville-tinged country twist. Later, in 1994, Mariah Carey revived the song via a contemporary R&B makeover.

Carey’s version hit the US charts but was eclipsed in terms of sales by Michael Bublé’s recording a quarter of a century later, when the velvet-voiced Canadian singer lit up his jazz-infused rendition with a good sprinkling of Christmassy big-band pizzazz.

With its irresistible swinging pulse and blaring horns, Bublé’s remake – one of the highlights from his multi-platinum 2011 album, Christmas – was a hit in the UK as well as other parts of Europe, and made No.10 in the US. To date, the Canadian’s version holds the record as the best-selling version of Santa Claus Is Comin’ To Town, a Christmas tune that’s as essential to any holiday soundtrack as Jingle Bells, and whose popularity among the best Christmas songs shows no sign of fading.