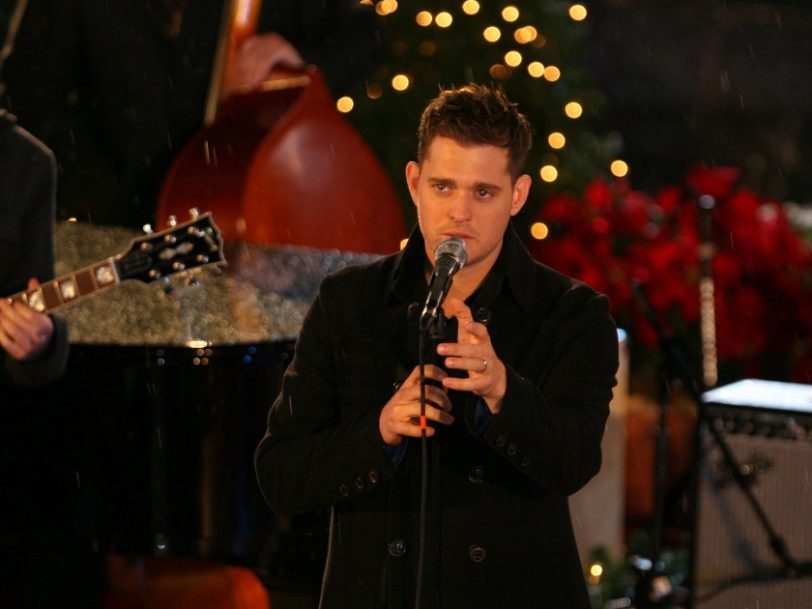 In emulating his crooner heroes with the ‘Christmas’ album, Michael Bublé created a cracker of his very own.

For the velvet-voiced Canadian singer Michael Bublé, recording a Christmas album was the realisation of a long-held dream that had begun back in the early 80s when, as a young boy, he heard Bing Crosby’s iconic 1945 holiday album, Merry Christmas, piping out of the family stereo. Entranced by the deep-voiced jazz crooner’s vocals, which oozed like warm treacle over snowy seasonal songs, the young Bublé kept demanding to hear the album, even during the summer months. “I just thought it was the coolest stuff in the world,” he told Malaysia’s New Straits Times in 2009.

A chance to emulate his heroes

Crosby’s Merry Christmas album undoubtedly helped to ignite Bublé’s interest in being a jazz vocalist, and so it was perhaps no surprise when, as his own was career was taking off, he recorded its Irving Berlin-penned standout, White Christmas, for his very first seasonal release: a five-song EP called Let It Snow, released in 2003. By that time, Bublé was gaining worldwide recognition on the strength of the three studio albums he had so far delivered, and was seen as keeping the flame alight for the easy-listening music that Crosby, Frank Sinatra and Dean Martin had made their own in the 40s, 50s and 60s.

But it wasn’t until 2011 when Bublé devoted an entire album to Christmas-themed material. Simply titled Christmas, it came on the back of his sixth – and, at that point, highest-grossing studio album – 2009’s multi-platinum Crazy Love, which had helped cement the singer’s status as a pop A-lister. For a singer like Bublé, brought up on artists whose Christmas albums set the gold standard for seasonal musical fare, it was a chance to emulate his heroes.

“This was my dream, to do it this way”

As it turned out, making his Christmas album marked a defining moment in Bublé’s career. Basing it on the holiday music he loved, he had a clear idea of how he wanted the record to sound, recording live to tape while backed by a full orchestra. “I wanted to recreate what I had grown up with, and that was that Bing Crosby feel and great arrangements,” he explained in 2011. “When I grew up, the records that I loved listening to, they didn’t have click tracks or Pro Tools or Auto-Tune or stuff like that. People just did a great performance and that’s what you heard, with the flaws. This was my dream, to do it this way.”

To help make his dream a reality, Bublé enlisted fellow-Canadians David Foster and Bob Rock to produce the sessions, which were recorded in Hollywood’s legendary Capitol Studios. They laid down 15 tracks, ranging from traditional carols (Silent Night) and old chestnuts (Have Yourself A Merry Little Christmas) to Sinatra-esque big-band swing numbers (Santa Claus Is Coming To Town) and more contemporary festive songs, which included Mariah Carey’s All I Want For Christmas Is You, transformed into a slow, languorous ballad. There was even room for a new original tune, the heart-warming Cold December Night, co-written by Bublé.

Bublé’s Christmas album was also notable for several guest cameos that added to its mood of seasonal conviviality. Country-pop queen Shania Twain turned up on White Christmas, reconfigured as a duet boasting a retro-style arrangement, while on Jingle Bells, UK vocal trio The Puppini Singers weaved their close, Andrews Sisters-style, harmonies around Bublé’s voice to create a stylish 40s-throwback sound. And for the album’s rousing finale, the Mexican singer/actress Thalía appeared on a medley combining Mis Deseos with José Feliciano’s anthemic Feliz Navidad, which was remodelled into a singalong tune accompanied by chiming bells.

An integral part of the Christmas season

Released on 21 October 2011,Christmas was an instant hit, rapidly rocketing to No.1 on both sides of the Atlantic as well as topping the charts in many other places around the globe. It proved to be the second-best selling album of the year in the US, only beaten by the phenomenon that was Adele’s 21. And it was a similar story elsewhere in the world – a feat that made Christmas undisputedly the most popular album of Bublé’s career.

Christmas was reissued in 2012, but, in a savvy move, a clutch of tantalising new cuts were added to the tracklist, including a supercharged big-band version of Frosty The Snowman, which reunited Bublé with the honey-throated Puppini Sisters. The second incarnation of the album once again stormed the charts and, since then, Bublé’s Christmas album has reappeared every year, making its mark on album-sales rankings around the world.

Marking Christmas’ tenth anniversary, in November 2021 the album was expanded into a 2CD package that comprised the original record plus a bonus disc housing seven tracks, two of which were new: an uplifting, pop-tinged Bublé original called The Christmas Sweater and a remake of Let It Snow! Let It Snow! Let It Snow!, cut at London’s Abbey Road Studios with the BBC Big Band Orchestra.

For Bublé super-fans with deeper pockets, a lavish, limited-edition super-deluxe box set contained both CDs but also featured an exclusive green-vinyl version of the album. Bolstered with a 48-page hardbound book, an individually numbered 12” lithograph and a revealing, behind-the-scenes DVD capturing the album’s creation, the set’s festive feel was heightened with a bespoke Christmas ornament as well as six Christmas cards and sheets of wrapping paper.

Over a decade on from its release, Michael Bublé’s Christmas album is a gift that keeps on giving. A desirable stocking-filler that has outsold all the other albums he’s made combined, it has become as much an integral part of the festive season as the immortal music of Bublé’s heroes Crosby and Sinatra.

Find out which track from Michael Bublé’s ‘Christmas’ album has made it on to our list of the best Christmas songs of all time.