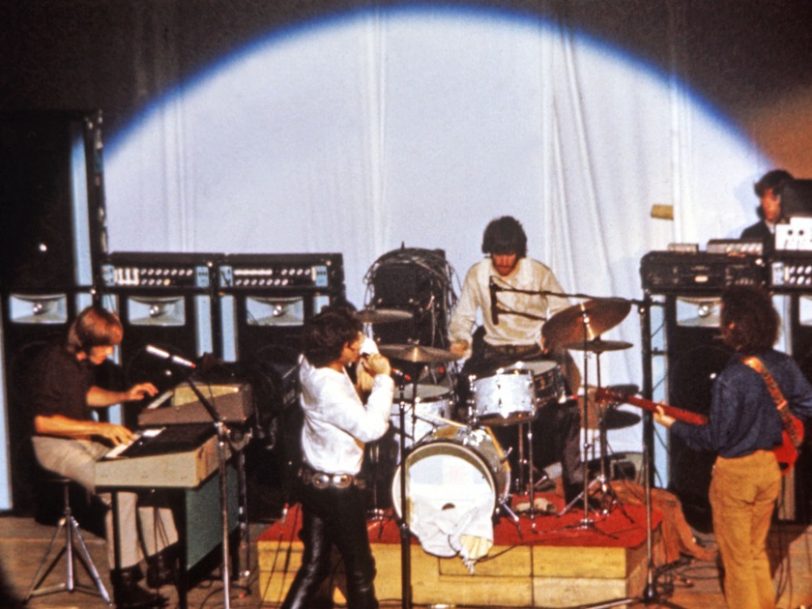 Break On Through: How The Doors’ Debut Single Found New States Of Mind

The opening song on The Doors’ debut album, Break On Through (To The Other Side) established the band’s groundbreaking musical vision.

“There are things you know about, and things you don’t, the known and the unknown, and in between are the doors – that’s us,” Ray Manzarek told Newsweek in 1967. The Doors’ fascination with exploring other realms through altered states of consciousness came as much from keyboardist Manzarek, guitarist Robby Krieger and drummer John Densmore’s collective interest in Transcendental Meditation as it did from frontman Jim Morrison’s Dionysian commitment to what he once described as “a long, prolonged derangement of the senses”. But whether through meditation or medication, the message of their debut single, Break On Through (To The Other Side), was clear: there were vast swathes of experience to be had – and The Doors could help listeners discover them.

Listen to the best of The Doors here

“Jim had broken through the closed circuit of the ego”

Manzarek’s quote nodded to two different sources for the band’s name: visionary Romantic poet William Blake’s declaration, in his collection of writings from the early 1790s, The Marriage Of Heaven And Hell, that, “If the doors of perception were cleaned every thing would appear to man as it is, Infinite,” and Aldous Huxley’s 1954 book, The Doors Of Perception, which, taking its name from Blake’s quote, chronicled Huxley’s experimentation with mescaline, the hallucinogen that would become a staple drug for the 60s counterculture.

By the time The Doors recorded Break On Through (To The Other Side), during the second day of a week-long session in the summer of 1966 that spawned their self-titled debut album, the group had their own psychedelic experiences to draw from. Morrison, who was influenced by both Blake and Huxley, frequently dropped acid while seeking to discover the uncharted realms of his own mind. Though, according to fellow-traveller Manzarek, the pair didn’t often discuss their experiences in detail, it was, he said, possible to “feel the journey in the other people’s emanations”. Writing in his memoir, Light My Fire: My Life With The Doors, the keyboardist continued, “And, hell, what was there to say, anyway? It was the understanding beyond words. It was the place beyond intellect… And Jim had broken through the closed circle of the ego. He was free.”

Freedom was a preoccupation for Morrison throughout his life. “I offer images – I conjure memories of freedom that can still be reached – like The Doors, right?” he told rock critic Lizzie James in 1969, before asserting that the band’s fans had to want what he had to offer: “But we can only open the doors – we can’t drag people through.” With Break On Through (To The Other Side), the singer exhorted listeners to follow his lead and reach beyond their own self-imposed limitations.

“I like ideas about the breaking away or overthrowing of established order. I am in interested in anything about revolt, disorder, chaos, especially activity that seems to have no meaning,” Morrison once said. But while he often railed against authority, his lyrics were as much about challenging existential norms as they were about defying societal ones: “Sometimes the pain is too much to examine, or even tolerate,” he said of the darker themes his lyrics often took. “That doesn’t make it evil, though – or necessarily dangerous. But people fear death even more than pain. It’s strange that they fear death. Life hurts a lot more than death. At the point of death, the pain is over.”

With lyrics such as “I found an island in your arms/Country in your eyes/Arms that chained us, eyes that lied”, Break On Through (To The Other Side) encapsulated everything the best Doors songs would go on to explore: sex, death, and what Morrison often saw as the inseparable relationship between the two. “I wrote that one morning down in Venice [Beach, Los Angeles] in the canals,” he explained to Hit Parader shortly after the song’s release, suggesting that the pain of heartbreak also fed into the lyrics, which came to him while he was making a literal crossing: “I was walking over a bridge. I guess it’s one girl, a girl I knew at that time.”

“There wasn’t a lot of discussion… it was all intuitive”

“When Ray handed me these crumpled pieces of paper with, ‘Day destroys the night, night divides the day, tried to run, tried to hide, break on through…’ I was like, Where are my drums? This is great,” John Densmore later recalled of his first encounter with the song that would soon open The Doors’ debut album.

When the group came to record Break On Through, the three instrumentalists brought differing musical influences to their uniquely freeform psychedelic blues-rock, with drummer John Densmore laying down a bossa nova backbeat inspired by Stan Getz and João Gilberto’s crossover jazz album Getz/Gilberto, keyboardist Ray Manzarek playing a left-handed bassline that nodded to Ray Charles’ incendiary 1959 single What’d I Say, and guitarist Robby Krieger drawing on Paul Butterfield Blues Band’s recording of Elmore James’ blues standard Shake Your Money Maker for his parts. “There wasn’t a lot of discussion between us and Jim about songwriting,” Densmore later recalled. “It was all intuitive.” Writing in his memoir, Riders On The Storm: My Life With Jim Morrison And The Doors, the drummer also enthused, “Break On Through was a gas to play because the arrangement was so tight, and I got to show off my jazz drumming.”

In under two and a half minutes, the song established the kind of groove The Doors worked up at their most sympatico, and introduced a darker flipside to the hippie ideal. Released in the first week of January 1967 as The Doors’ debut single, and with the Summer Of Love six months away, Break On Through (To The Other Side) was at odds with the prevailing hippie trends, but it introduced the group as a vital new presence in rock music – one that was unafraid to push beyond the limitations of what had gone before. But this impulse also led to a minor controversy that arguably harmed the single’s chances in the charts: the band were forced to edit the word “high” from Morrison’s refrain “Everybody loves my baby/She get high” – though the singer would have no problem reinstating the word during live performances.

With The Doors, their family and friends phoning LA radio stations to make anonymous requests for the song, Break On Through peaked at No.11 on the local chart, though it stalled at No.126 on the Billboard Hot 100, leaving it to their follow-up single, Light My Fire, to score The Doors their first hit when it topped the US charts and went Top 10 in the UK that spring. But while Densmore later admitted to being “worried that the beat was too eccentric for the mass market”, Jac Holzman, boss of Elektra Records, The Doors’ record label, defended the decision to release Break On Through first.

Talking to The Doors Collectors Magazine three decades later, Holzman explained, “If we were going to learn our way, we were not going to learn our way on Light My Fire; rather with Break On Through and get the marketplace prepared. It was just too early to start with Light My Fire.” Break On Through also inspired the tagline on the billboard ad that Elektra unveiled on LA’s Sunset Strip – a first in rock music – “The Doors break on through with an electrifying album”, and the single was also given one of the earliest promo videos, a basic, low-lit set-up that sought to capture the intensity The Doors brought to the stage each night as their live shows became the stuff of legend.

As a rock anthem – a provocation and an invitation – Break On Through (To The Other Side) remains not only one of The Doors’ signature songs, it continues to provide a touchstone for intrepid explorers of all types. When NASA landed their Curiosity rover on Mars in August 2012, it was one of the tunes – along with others such as the Star Wars theme and The Beatles’ Good Morning Good Morning – that the team used to “wake up” their vehicle each morning.

For Jim Morrison, Break On Through also offered a gateway to a life that almost came about by accident:

“I never did any singing. I never even conceived it,” he told Rolling Stone in 1969. “I thought I was going to be a writer or a sociologist, maybe write plays… But I heard in my head a whole concert situation, with a band and singing and an audience – a large audience. Those first five or six songs I wrote, I was just taking notes at a fantastic rock concert that was going on inside my head. And once I had written the songs, I had to sing them.”