As part of a lineage that includes musical icons such as Neil Young, Joni Mitchell, Rush and Leonard Cohen, Alanis Morissette remains one of Canada’s most cherished icons. Picked from a unique catalogue built on her own distinctive style, the best Alanis Morissette songs range from heartfelt ballads to rock anthems rife with angst and 90s alienation, and prove why she remains the voice of a generation..

After the release of 1995’s Jagged Little Pill, Morissette has had no trouble creating rockier, more urgent arrangements for her songs, with Numb sporting melodic violin parts which enhance the impact of the already menacing, electric guitar-led song. Despite its somewhat fatalist lyrics, the track provides a solid centrepiece to the Havoc And Bright Lights album, thanks to its articulate composition and fresh sound.

Opening with Middle Eastern percussion, Citizen Of The Planet immediately paints the cultured picture Morissette aims for. She sings compellingly of journeys, French and Hungarian snow, and European bliss, before the listener is thrown into a brief, punchy chorus at the 1.16 mark. Thanks to Morissette’s assured vocals, the instrumental flourishes feel as though they are an authentic part of the singer’s travels, forming the backdrop to her claims that the divine Chinese Kuan Yin is her President of the world.

A mature ballad characterised by excellent vocal work and a solid blend of her signature 2000s odes with soothing, optimistic guitar, Ablaze finds Morissette sending advice to her children with both the love of a mother and the flair of a certified songwriting maestro. It’s as if she anticipates the potential shortcomings and obstacles of motherhood (“We seem to easily forget we are made of the same cells”), but sincerely attempts to prevent them (“My mission is to keep the light in your eyes ablaze”). The result it one of the best Alanis Morissette songs of the 21st century.

Combining a live DVD with B-sides and outtakes from Under Rug Swept (her studio album of the same year), Feast On Scraps features hidden gems such as Sister Blister – an uncompromising blend of earnest vocals and distorted guitar which signals something of a post-grunge sunset for the singer.

Eight Easy Steps offers further examples of Morissette’s ability to incorporate world-music instruments. While the majority of the track is dominated by 2000s electronica, it is built on a Middle Eastern beat, which is fitting considering that musicians Joel Shearer and Paul Livingstone contribute, respectively, bouzouki and sitar to the song.

Morissette’s early dance-pop days are a far cry from the alt-rock style which cemented her status as a superstar, but Walk Away proves she could hold her own on infectious dancefloor anthems. Featuring a sample from legendary duo Rob Base And DJ E-Z Rock’s It Takes Two, as well as a music video starring a pre-Friends Matt LeBlanc in a snooker bar, Walk Away is a surprisingly fun, innocent number from when Alanis was taking her first steps.

Essentially tearing apart some self-centred reprobate for three and a half minutes (“I know you’ve never really taken responsibility/I know you’ve never really listened to a woman”), Narcissus shows that, while feminism may have been a recurring theme throughout the best Alanis Morissette songs, even after four albums, the Canadian icon still had more to say about it than most.

After the assertive nature of Jagged Little Pill, many tracks on its follow-up, Supposed Former Infatuation Junkie, take their time to develop as miniature stories. With an angelic and breathy Morissette singing over twinkling guitar, Heart Of The House is a refreshingly dream-like song which poses the question: “Do you see yourself… in my Tinkerbell tendencies?”

Beginning with an innocent melody, Everything finds Morissette in a self-reflective mood right from the get-go: “I can be an asshole of the grandest kind.” It’s not all honest fatalism, though; she goes on to declare she is “the wisest” and “the kindest soul” – but only sometimes. Closing So-Called Chaos on an unflinchingly human note, Everything is evidence of Morissette growing stronger and more mature over the years.

Another change in direction from the follow-up to Jagged Little Pill, the rhythmic, fuzzy and wholly distant Can’t Not could be mistaken for a Portishead track, but Morissette’s vocal prowess ensures that it’s a direct sequel to Jagged Little Pill. With the singer switching from sickly sweet to valiant in a flash, Can’t Not reveals how the best Alanis Morissette songs could find her adapting to new styles with ease.

Another song that didn’t make the cut for Under Rug Swept, Fear Of Bliss certainly isn’t lacking in quality, though it’s closer in tone to the trip-hop stylings found on Supposed Former Infatuation Junkie, which may have made it a difficult track to find space for on the more guitar-oriented Feast On Scraps.

Though it’s amusing to hear the formative star sing about “plastic” people in a more manufactured pop style, there’s something about this track – from Morissette’s debut album – that grabs the attention and refuses to let go. It could be the powerful vocals in the chorus, or the pleasant synths looping throughout, but this sits among the best efforts from her pre-Jagged Little Pill era.

A massive – if perhaps overlooked – song, Tapes benefits greatly from Morissette’s atmospheric and airy sighs, which come in at the 2.05 mark and add another layer to an already impressive arrangement. A unique entry among the best Alanis Morissette songs, it finds the singer in a willingly vulnerable position, admitting her shortfalls in an attempt to clear the “havoc” in her mind.

Heartfelt and oh-so 90s, UR showcases some of Morissette’s best work as a singer and songwriter. Layering acoustic guitar on top of futuristic beats, it feels like a closing statement towards the end of a tumultuous decade that saw the Canadian go from post-disco starlet to accomplished alt-pop hero. The harmonica that appears at the two-minute mark is a great touch, tethering an otherwise forward-looking song to the blues tradition.

Officially a hidden track that follows after the “Jimmy The Saint Blend” version of You Oughta Know, Your House is an astonishing track that offers the greatest example of Morissette’s vocal range and ability, her cries bouncing off what feels like giant marble walls in a large, open-plan space. That voice in full flight is enough to conjure a woman’s horrifying realisation of her partner’s adultery, before Morissette switches to a sombre tone when the battle seems all but lost.

Quite comfortably the best song on Supposed Former Infatuation Junkie, Thank U benefits from Morissette’s understanding that less can be more. The chorus alone is magical, with the singer going from solemn calls to stratospheric wails with the line “Thank you disillusionment”, yet there’s an angsty juxtaposition. Never has apprehension sounded so soft and considered.

There is no denying that Jagged Little Pill remains Alanis Morissette’s finest hour, and the reassurance given by Hand In My Pocket is one of the strongest arguments for its place among the best Alanis Morissette songs. Despite the singer’s admissions that she’s broke, lost, young and underpaid, she reminds the listener that everything’s going to be fine. It’s remains a reassuring message for those listeners stuck somewhere between the throes of puberty and the uncertainties of young adulthood.

“Do I stress you out?/My sweater’s on backwards and inside-out…” All I Really Want is an unabashed elegy to all the things the singer desires, yet they’re far from fever dreams. Here Morissette is the antithesis of the spoiled brat: patience, peace and relief from her troubled soul are all she requires. It’s a sentiment she has returned to throughout her career (see Tapes), but she did it best here.

Is it ironic if a song called Ironic doesn’t truly embody irony? Perhaps, but Morissette’s chart-topping take on life’s inconveniences is a triumph, and the song that truly put her on the map. Tying off any loose ends from her previous dance-pop ventures, Ironic marked a significant departure that breathed new life into her fledgling career. It remains the first song that comes to mind when her name is mentioned.

Topping our list of the best Alanis Morissette songs, You Oughta Know encapsulates everything that’s great about the singer: uncompromising, vocally masterful and hell-bent on crafting one hell of a song. Her definitive anthem, there’s something for everyone here, including punchy bass (courtesy of Red Hot Chili Peppers’ Flea), post-grunge distortion and a girl-power aesthetic that will last the ages. 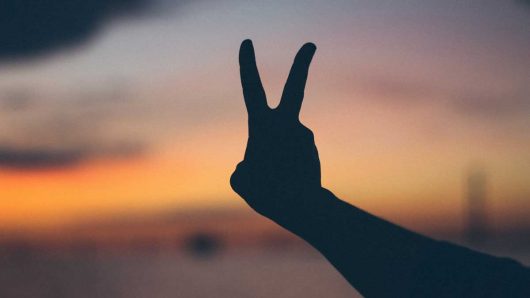 From peacenik protest anthems to sweet soul music, the best songs about peace continue to inspire unity and harmony.