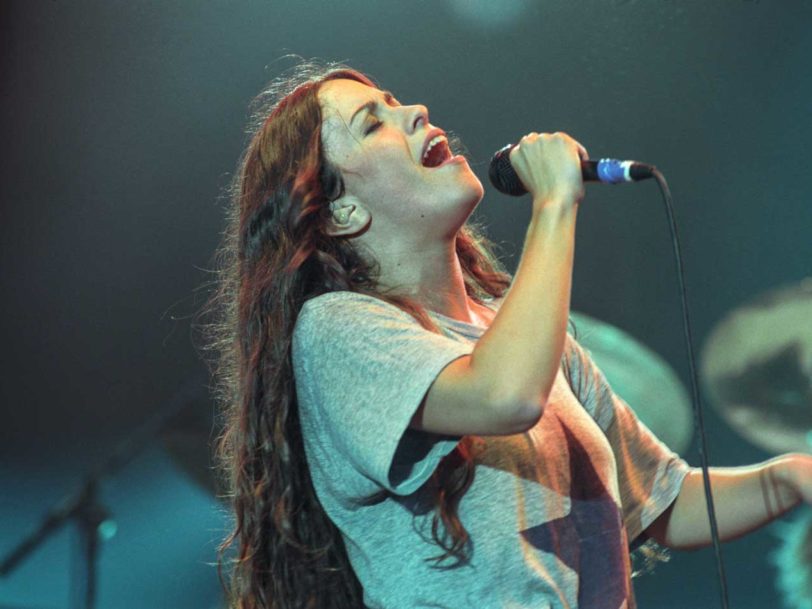 Ironic: The Ironically Un-Ironic Song That Made Alanis Morissette An Icon

Over 25 years later, the ironically un-ironic song is still very much a part of the pop cultural psyche. References and homages abound on the silver screen, the TV screen and even the small touchscreen that seldom leaves your hand. From viral videos such as Morissette’s own 2015 parody on The Late Late Show, to nods in 90s flashbacks on the TV drama This Is Us, it’s clear that the song’s influence endures.

“As a young person I was not allowed to feel sadness”

Before becoming a global sensation, Alanis Morissette had gained notice in Canada, off the back of two albums released exclusively in her homeland, 1991’s Alanis and the following year’s Now’s The Time. After relocating to Los Angeles, Morissette found herself in a city whose freer way of life helped encourage the exploratory approach she took to writing her third album. Teaming up with her long-term collaborator, Glen Ballard, she developed the vehement, unapologetic songwriting style that would define not only Ironic and Jagged Little Pill, but Morissette’s entire career.

The electric response to Jagged Little Pill’s first single, You Oughta know, laid the foundations for what was to come. Bringing to mainstream music something that radio lacked at the time, the angst-driven, grunge-infused sung was also pop-focused enough capture the attention of a widespread audience that soon coveted more.

Speaking in the Jagged Little Pill mini-documentary that premiered on Amazon Music in 2020, Morissette revealed that she resisted the urge to overwork the songs; recording a maximum of several vocal takes for each song, she and Ballard kept her free-spirited writing intact. The pair found their sound with Ironic. As Morissette honed her new autobiographical, raw and vulnerable style, the rest of the album solidified her eclectic alt-rock status: she had one hand in her pocket, but a finger in many musical pies.

“Thank you, patriarchy, for crumbling and falling”

No fewer than six Jagged Little Pill singles were released into the upper echelons of the charts, but the intense media interest skyrocketed with Ironic, which arguably remains Morissette’s most recognisable song. After its release, on 27 February 1996, a storm of fascination surrounded the bewitching, off-beat style she brought to the table. Morissette’s position in the mainstream was only further assured when Ironic’s promo clip landed. To this day, it remains one of the best music videos of the 90s.

The accolades rolled in. In 1996 alone, Morissette collected four Grammys – kick-starting a slew of awards she would receive throughout her career, including the Icon Award at Billboard’s 2019 Women In Music ceremony. Before an audience of industry insiders at the Hollywood Palladium, Morissette closed her acceptance speech with the fittingly iconic line, “Thank you, patriarchy, for crumbling and falling.”

Her influence has stood the test of time. Decades after emerging as a passionately expressive artist, Ironic has found new audiences drawn to the autobiographical nature of Morrissette’s work. “Once [music] is shared publicly, people make it their own,” she reflected to This Morning in 2020. “I love their interpretations no matter what they are.”

Technology in the 21st century has heightened nostalgia for the past. Whether it’s the older generation that lived through it, or younger generations that draw from it, we have the entire history of music at our fingertips, and, now more than ever, people are looking to the 90s for inspiration. Jagged Little Pill and Ironic remain a part of music fans’ steady journey of discovery.

Part of that discovery fuels a dispute that has trailed the song since its release: whether or not Morissette’s lyrics are correct in their definition of “irony”. The singer herself has shrugged it off – “it wasn’t a traumatic debate”, she later said – and she even penned a number of tongue-in-cheek additions when writing the stage musical inspired by Jagged Little Pill’s songs.

“I’d always embraced the fact that every once in a while I’d be the malapropism queen,” Morissette recalled, adding, “And when Glen and I were writing it, we definitely were not doggedly making sure that everything was technically ironic.”

The pedantry surrounding the literary faux pas may mock – or perhaps celebrate – the suspected blunder, but what if, in penning her explosive song, the self-aware Morissette was in on it all along

Now that would be ironic.

Check out our best 90s albums to find out where Jagged Little Pill ranks.