Today bridges announce the release of their second album, Våkenatt in full. Recorded in 1981, and shelved until 2018, the band announced that the record would be available on vinyl, CD and digital platforms.

bridges, who famously included future a-ha members, Magne Furuholmen and Paul Waaktaar-Savoy, alongside Viggo Bondi (Bass) and Erik Hagelien (Drums), who was later replaced by Oystein Jevanord on drums formed during their schooldays in Oslo, Norway and played gigs across 1978 and 1979. With one audience member at a performance being the future a-ha lead singer, Morten Harket.

bridges released their debut album Fakkeltog in 1980 in a run of 1,000 copies and began work on their follow-up, Våkenatt, in 1981 but it wasn’t released. Band members Waaktaar and Furuholmen planned to continue their musical careers in London after 1981, but Bondi and Jevanord declined, and so bridges split up and Magne Furuholmen and Paul Waaktaar-Savoy would go on to form the synth-pop act a-ha. 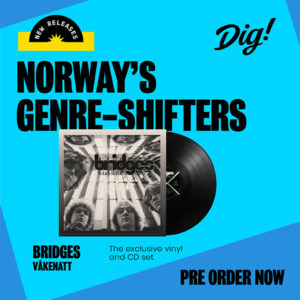 Interestingly, bridges sound is totally different to that of a-ha, and is a slice of Norwegian psych-rock. Rock historian Terje Nilsen states that the record is, “An essential chapter in the history of Norwegian popular music. Våkenatt documents the transition from the indie band Bridges to the global success of a-ha. And certainly, the album is an artistic achievement on its own – a timeless musical masterpiece, which feels completely natural and relevant to release today, almost four decades after its conception. This is the sound of extremely talented and dedicated musicians evolving rapidly. Listening to the album, it`s fantastic to imagine the musicians being only 18-21 years old during the recording sessions.”

While Våkenett was never made fully available, it was pressed up in a small run of vinyl copies in 2018, by the Rockheim Museum in Trondheim, Norway. Rockheim, which is the country’s national museum for pop music from the 50s to present day, made 900 copies of the album on green vinyl and which now fetch large sums on auction sites.

But, finally, fans who didn’t manage to get a copy in 2018 can now hear the record themselves.
Released digitally, on CD, and on vinyl, it is available to pre-order here, and will be released on the 20th November.