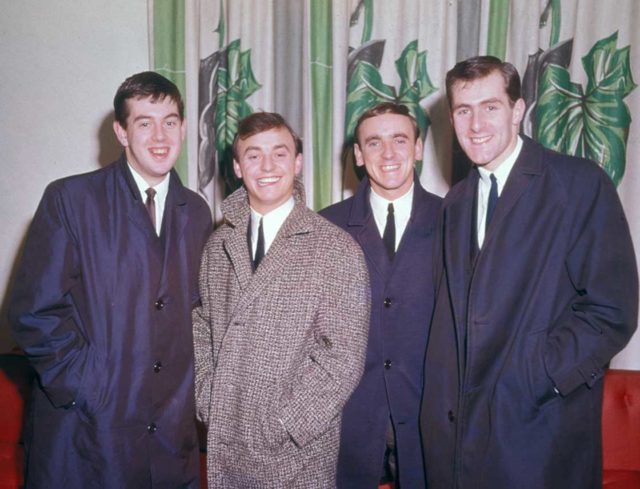 Gerry Marsden, singer with Gerry & The Pacemakers, has died following a short illness.

His family shared the news that he passed away on Sunday, 3rd January. In a statement they revealed that, “Gerry died earlier today after a short illness in no way connected with Covid-19. His wife, daughters and grandchildren are devastated.”

Gerry Marsden’s daughter, Yvette Marbeck, said he went into hospital on Boxing Day after tests showed he had a serious blood infection that had travelled to his heart.

Ms Marbeck told the PA news agency: “It was a very short illness and too quick to comprehend really.

Gerry Marsden rose to fame in the early 60s with Gerry & The Pacemakers, who formed part of the Merseybeat era of stars including The Searches, Cilla Black and The Beatles, among others.

Gerry & The Pacemakers scored three Top 5 hits in 1963, with How Do You Do It?, I Like It and You’ll Never Walk Alone – which would come to be their most iconic song, and a football terrace anthem for Marsden’s hometown club of Liverpool FC. The football club shared their condolences on their Twitter, stating “It is with great sadness that we hear of Gerry Marsden’s passing. Gerry’s words will live on forever with us. You’ll Never Walk Alone.”

They also shared a video of fans singing the anthem in the stadium, stating that, “Gerry’s voice accompanied our biggest nights. His anthem bonded players, staff and fans around the world, helping create something truly special.”

Gerry & The Pacemakers began their career at Liverpool’s iconic Cavern Club, and performed their over 200 times. They racked up nine Top 40 hits between 1963 and 1965, as well as scoring a No 2 album with How Do You Like It, in 1963 and a Top 20 album with Ferry Cross The Mersey – the titular song also providing the band with one of their best-loved hits.

The Cavern Club also took to Twitter to share their thoughts on the star, saying “the word legend is overused, but Gerry was not only a legend, but also a very good friend of the Cavern.” While Jon Keats, the director of The Cavern Club paid tribute to Marsden in an interview with Capital FM, which can be seen below.

Devastated to hear of the passing of Gerry Marsden earlier today.

The word legend is often overused but Gerry was not only a legend, but also a very good friend of The Cavern. pic.twitter.com/74HQZP4gio

“To this day, he knew what You’ll Never Walk Alone meant to the whole of the city”@cavernliverpool Director Jon Keats pays tribute to Gerry Marsden – who died yesterday aged 78 #CapitalReports #YNWA pic.twitter.com/9pJL684AL2

In 1985, Marsden appeared as one of the vocalists for a charity rendition of You’ll Never Walk Alone, released to raise funds for victims of a fire that broke out at a football match at Bradford City on 11th May, killing 56 spectators.

He recorded a charity version of his hit Ferry Cross The Mersey alongside other famous Liverpudlian singers, including Paul McCartney, The Christians, and Holly Johnson of Frankie Goes To Hollywood. to raise funds for the Hillsborough Disaster in 1989; a cause that was close to Marsden’s heart for the rest of his life.

Both charity renditions scored Marsden No 1 in the charts, and he became the first person to sing on two different versions of a No 1 hit song.

In April 2009, Marsden was awarded the Freedom of Liverpool. He marked the occasion by taking a ferry across the Mersey and bringing his guitar with him to sing his famous hit.