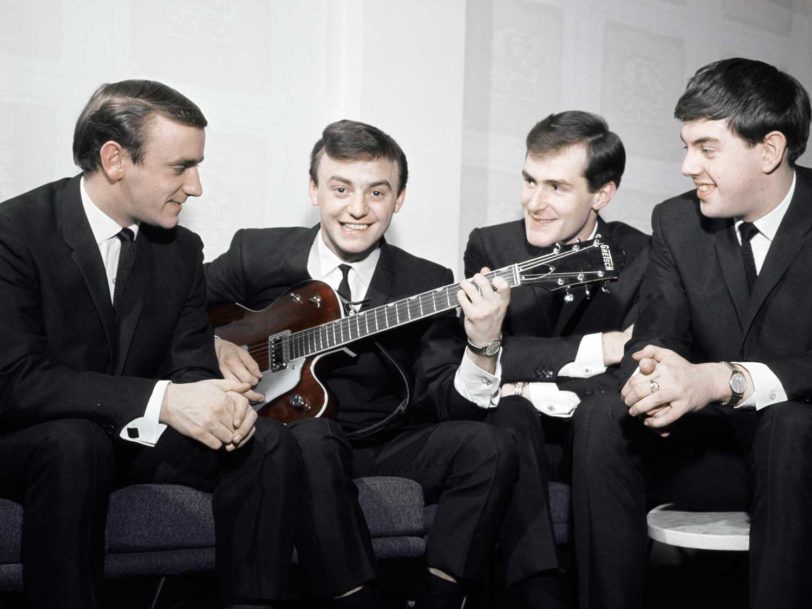 A Broadway song that was a hit for Gerry And The Pacemakers, You’ll Never Walk Alone is “a modern hymn” that still has the power to soothe.

You’ll Never Walk Alone, a song that has been a No.1 hit for both Gerry And The Pacemakers and veteran soldier Captain Tom, a classic that has become the anthem of Liverpool Football Club and which has been recorded by Elvis Presley, Frank Sinatra and Aretha Franklin, actually started life as a Broadway show tune.

It was first sung in April 1945 at New York’s Majestic Theatre by Christine Johnson, who was performing in the Rodgers and Hammerstein musical Carousel. Lyricist Oscar Hammerstein presented his powerful, moving words, which included the lyrics “Walk on through the wind/Walk on through the rain/Though your dreams be tossed and blown/

Walk on, walk on/With hope in your heart/And you’ll never walk alone” to Richard Rodgers and asked him to set them to music. Mary Rodgers, who wrote the novel Freaky Friday, said her father had “great difficulty” composing the right music for the words, which were used in the musical to console a grieving widow. His inspired solution was to match the words to a march in 4/4 time that rises and falls like a sigh. When the singer Mel Tormé told Rodgers that the tune made him cry, the composer replied, “It’s supposed to.”

Song-sheet copies of You’ll Never Walk Alone sold well across America and people started singing it at funerals; after watching a friend being interred while it was sung, Irving Berlin described the song as a modern hymn “right up there with the 23rd Psalm”.

“I heard all the crowd singing it”

Liverpool-born Gerry Marsden was 13 when a film version of Carousel came out; he was enchanted by Claramae Turner’s version of the song. A decade later, when he was a successful pop star with his band Gerry And The Peacemakers (they were originally called Gerry Marsden And The Mars Bars but changed their name under pressure from the confectionary company), he persuaded his manager that their next single should be a version of You’ll Never Walk Alone.

The song – featuring singer and guitarist Marsden, his brother Fred on drums, bassist Les Chadwick and pianist Les Maguire – was released in mid-October 1963. Within a couple of weeks, it had shot to No.1 and it stayed there for the whole of November. It was in the charts for 19 weeks in all. Gerry Marsden remembers attending a Liverpool game at this time. “I heard all the crowd singing it and thought, Bloody hell, fantastic, they’re singing my song.” You’ll Never Walk Alone quickly became the club’s signature sound, the song’s title now adorning gates to Anfield stadium.

“You have given us a song”

In May 1964, Marsden and the band were in America to promote the song at the same time Bill Shankly’s team were there to play some friendlies. “We were in New York doing The Ed Sullivan Show and the Liverpool team were playing around America,” Marsden recalled. “So I said to Ed, ‘There’s a soccer team here from England, called Liverpool, get them on stage and they’ll sing Walk Alone with me.’ So we got the whole team on the stage and we sung Walk Alone on The Ed Sullivan Show. Coming off, Bill Shankly said to me, ‘Gerry, my son, I have given you a football team, and you have given us a song.’”

Rodgers, incidentally, was upset about the way his song was being used for “mass chanting” at football stadiums, and reportedly consulted his lawyers to see if he could put a stop to what he considered “a travesty of his musical intentions”. He eventually decided against any legal action and the song continued to be socially relevant for the next six decades. There have many fine versions of You’ll Never Walk Alone down the years, including versions by Johnny Cash, Roy Orbison, Peggy Lee, Nina Simone, Judy Garland and Doris Day.

A song for troubled times

Marsden led an all-star charity remake of the song in 1985 to raise money for the victims of the terrible fire at Bradford City’s stadium. The song also gave a sense of hope to fans grieving in the wake of 1989’s Hillsborough Stadium disaster. In April 2020, a new fund-raising version featuring the 78-year-old Marsden was released, which included a music video with messages supporting the NHS during the coronavirus crisis.

That same month, Captain Tom Moore, who had captured the hearts of people by walking lengths of his garden to raise £30 million for the NHS, teamed up with his favourite singer, Michael Ball, to release a cover version of You’ll Never Walk Alone. The song debuted at the top spot on the UK’s Official Singles Chart, making 100-year-old Captain Tom the oldest artist to score a No.1 single in UK chart history.

Few songs in the history of music have managed to touch such a universal chord in people’s hearts as You’ll Never Walk Alone. Its hopeful message about “a golden sky waiting at the end of a storm”, along with “the sweet silver song of a lark”, is as relevant in these troubled times as it was in the dark days of the Second World War.