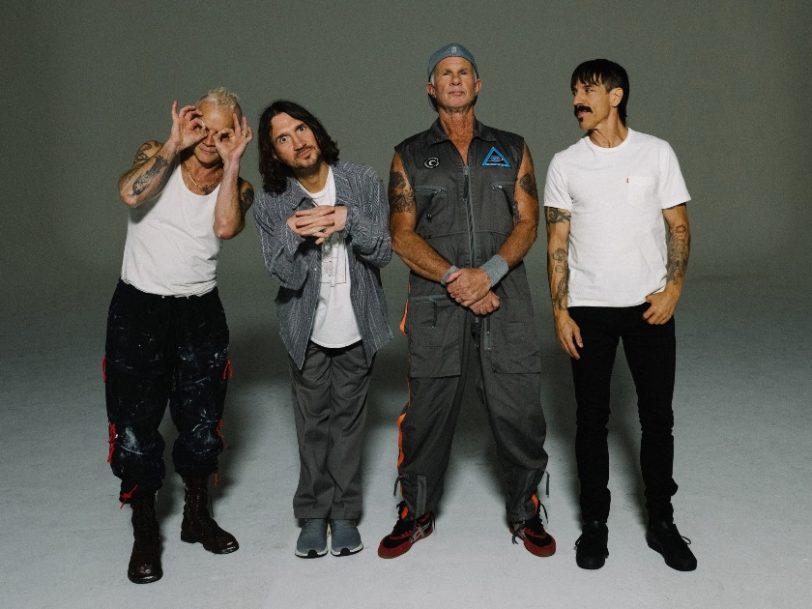 A daring double-album welcoming John Frusciante back into the fold, Red Hot Chili Peppers’ ‘Unlimited Love’ is a keeper.

It’s rare for any group’s 12th album to be hailed as one of the most hotly-anticipated releases of the year, but then Red Hot Chili Peppers are hardly your average band. Having experienced some of the highest highs imaginable during their rollercoaster 40-year career, the Californian quartet have long since secured their legend, yet their collective desire to embrace innovative new sounds ensures that Unlimited Love arrives bearing the weight of expectation.

The usual frisson of excitement is heightened this time around, for not only is Unlimited Love the long-awaited follow-up to 2016’s The Getaway, but its creation sees two key Chilis associates return to the fold. Last at the helm for 2011’s I’m With You, producer Rick Rubin again sits behind the console for this record, while guitarist John Frusciante – who left the group after 2006’s Stadium Arcadium – has rejoined for his third spell in the band, having replaced Josh Klinghoffer in 2019.

The guitarist’s bandmates are the first to admit his return has been especially significant, with bassist Flea declaring that he was “the best musician I’ve ever played with”, and frontman Anthony Keidis confessing that reuniting with Frusciante has brought about “the most monumental change in our lives”.

For his part, Frusciante recently told NME that making the record “felt very much like people who care about each other and are genuinely excited for everybody else to be the best they can be”. Certainly, Unlimited Love bears this philosophy out. Its 17 songs clock in at 70 minutes in total, but even the briefest of listens reveals that, not only is it free of filler, but it displays all the hallmarks of previous Chili Peppers keepers such as Blood Sugar Sex Magick and Californication.

A dose of infectious positivity

In fact, Unlimited Love succeeds because it respects the band’s illustrious past, but also keeps a keen eye on the future. Panacea for fans of old-school Chili Peppers, songs such as Poster Child and the infectious One Way Traffic proudly bring the funk, while the skinny guitars and gravity-defying Flea bassline which drive the sinewy Aquatic Mouth Dance also recalls the best of 1987’s The Uplift Mofo Party Plan.

Fans who first clambered on board circa Blood Sugar Sex Magick will also find plenty to cherish here – not least with the lilting, soul-infused It’s Only Natural, but also with album opener Black Summer, which begins as a mid-paced philosophical slow-burner akin to Under The Bridge before shifting up for a chorus which shoots for the stratosphere.

Elsewhere, though, the Chili Peppers are eager to embrace change. Issued a week ahead of the album, Not The One began life as a drum machine and bass-driven sketch in Flea’s garage, but eventually morphed into a dreamy, reggae-tinged ballad, while Bastards Of Light and the heartfelt White Braids & Pillow Chair prove that the group are becoming increasingly adept at sculpting memorably quirky pop songs when the mood takes them. The sun-kissed She’s A Lover, meanwhile, is arguably even more direct and offers a dose of infectious positivity just when the world needs it most.

Yet, for all its sonic advances, Unlimited Love frequently reminds us that Red Hot Chili Peppers are still in love with rock’n’roll in its myriad guises. Here Ever After is built on one of Flea’s most bullish basslines and Chad Smith’s rumbling toms, and it already feels like an angular alt-rock classic-in-waiting; meanwhile, the shape-throwing duo These Are The Ways and The Great Apes grant Frusciante all the space he needs to bring on the heavy artillery during his solos.

Indeed, the guitarist’s timely return to the fray is perhaps the most heartening aspect of Unlimited Love. In recent interviews, Frusciante has expressed his delight at his rapprochement with his estranged soul brothers (“We feel fresh, like a new band,” he recently told NME), and his contributions to this record are rarely less than decisive. The fluidity of his rhythm playing is a joy to behold on the likes of Black Summer, One Way Traffic and Veronica, and there’s an intensity and dynamism to his lead guitar work, whether he’s going for the burn on the out-and-out rockers, picking out beautifully-crafted quicksilver solos on tracks such as Let ’Em Cry, or spraying effects-laden feedback and distortion around to devastating effect on The Heavy Wing.

As with any great double-album, further detail emerges with repeated listens. The little organ part shading Let ’Em Cry, for example, adds a vital edge that really makes the song, while the closing Tangelo gradually reveals its melancholic, Big Star-esque qualities and makes for the ideal denouement. The devil’s in such details, but the headline news here is that Unlimited Love is a fantastic, reputation-enhancing Red Hot Chili Peppers record which fans both old and new will be swift to lavish affection upon.

Find out where ‘Unlimited Love’ ranks among our best albums of 2022.