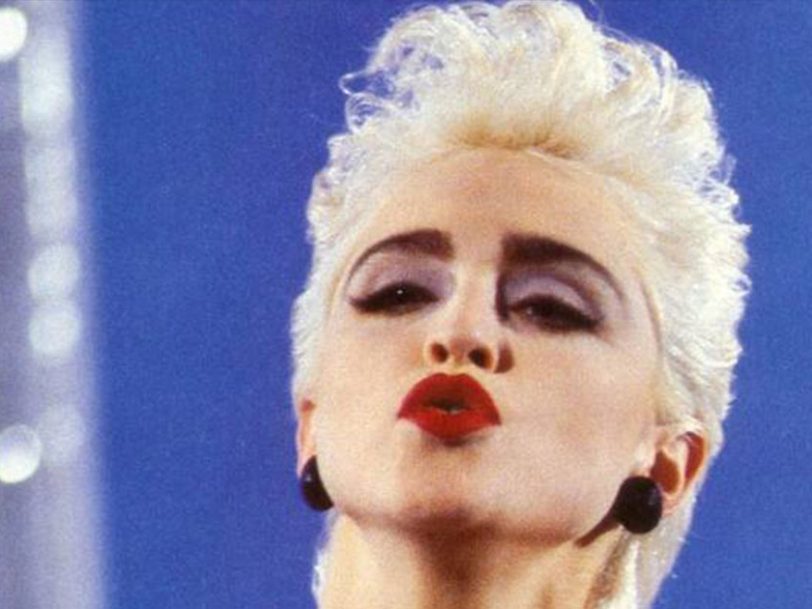 A slick 50s/60s pop homage, the song True Blue was another smash-hit single for Madonna, but few had seen it coming…

Released in mid-September 1986, True Blue was the sort of leftfield single that might have been career suicide for most artists who can only shift their sound ever so slightly if they want to keep things fresh. However, Madonna had few such concerns – as this song proved, the “Queen Of Pop” couldn’t put a musical foot wrong during the mid-80s.

When a British music magazine reported in early 1986 that Madonna was back in the studio recording something that sounded similar to Shakin’ Stevens, the news seemed like a flight of fancy from a journalist starved of anything substantial to report on. In fact, following the “Shaky” formula wasn’t such a bad idea considering the long-limbed Welshman would close the decade with 30 UK hit singles. But Madonna, the fast-rising disco-pop star, had yet to demonstrate the musical range for which she would shortly become renowned. Fans dismissed such a ridiculous confection… but the first track to appear from 1986’s mega-selling True Blue album, the assured power-ballad Live To Tell, and Madonna’s striking shift in her image, signalled that everything would change – and would continue to evolve – from hereon in.

A razor-sharp instinct for what would work

Issued on 17 September 1986, as the album’s third single, the True Blue song itself did in fact offer something of a 50s/60s pastiche, but it was rather more Motown and classic 60s girl-group in its leaning than Shaky’s usual rock’n’roll inspiration. Madonna has often said how the celebrated hits of acts such as Diana Ross And The Supremes and The Crystals had shaped her musical interests, and you can really hear that here.

This Stephen Bray co-composition is arguably the most representative of True Blue’s nine songs. An irresistibly catchy homage to the sunshine-pop of that formative decade, it was wrapped around a modern dance beat and featured plenty of era-appropriate synth top notes – especially in the terrific extended Color Mix, which was reworked for the clubs by Shep Pettibone, who would later collaborate with Madonna on her controversial Erotica album.

There was absolutely nothing to worry the parents here, which was probably something of a relief to record company executives after the storm-in-a-teacup fuss that the narrative of Papa Don’t Preach had caused. Making it to No.3 in the US and adding to a run of Madonna No.1s in the UK, True Blue’s success arguably marked the peak of Madonna’s “Pop Queen” phase, with the period’s phenomenal commercial success a not-so-surprising by-product of her updated Marilyn Monroe image (just one in a lengthy line of personas she has adopted across the decades) and her razor-sharp instinct for what would work on radio and MTV.

Insight into what was really important in Madonna’s world

For the True Blue promo clip, MTV sponsored a “Make My Video” competition in which Madonna invited US audiences to send in their own visual interpretations of the song. She presented the winners with a cheque, and the video, which looked rather like a sepia-toned outtake from Grease, went into heavy rotation in the US. Overseas audiences would get something a little slicker and an appearance from the star herself: director James Foley – working with Madonna on the film that would eventually become Who’s That Girl – helmed a sweet studio set piece with the “Queen Of Pop” in performance with three female backing dancers and plenty of 50s references, including a T-bird and a classic diner.

Going gold in the US and platinum in Australia, True Blue powered even more sales of its parent album – which, staking its claim to being one of the best Madonna albums of all time, would end up becoming the year’s best seller in Great Britain and, ultimately, the biggest international studio success of Madonna’s entire career. More tabloid overreaction would be provoked at the end of 1986, thanks to the outstanding Jean-Baptiste Mondino video for Open Your Heart, but as a sweet homage to the music she loved, the True Blue song offered insight enough into what that was really important in Madonna’s world. She was, indeed, madly in love – the album itself was dedicated to Sean Penn, “my husband, the coolest guy in the universe” – and that really was something worth shouting about. Just a shame that didn’t sell as many newspapers…