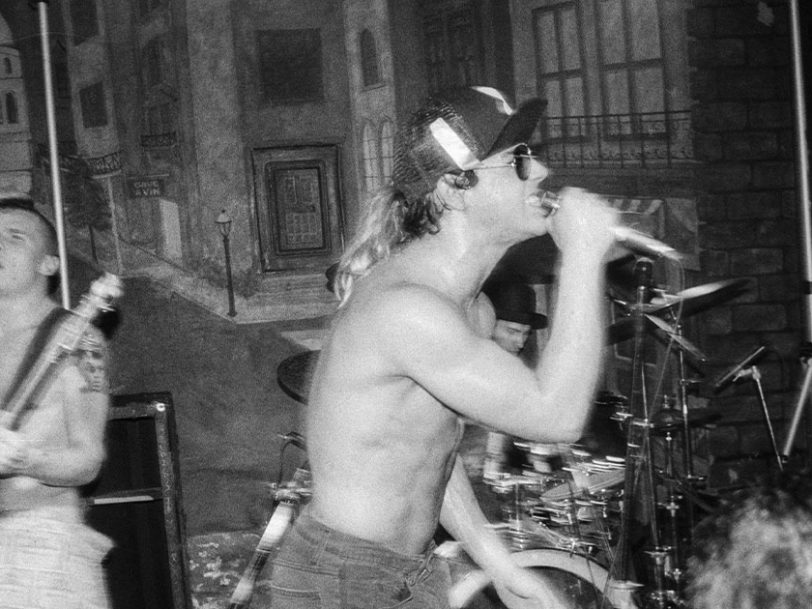 Its creation was chaotic and its supporting tour ended in tragedy, but Red Hot Chili Peppers’ third album, The Uplift Mofo Party Plan, provided the Los Angeles quartet with both their Billboard 200 breakthrough and their first gold disc, and it also established them as one of the most original-sounding bands of their generation.

Listen to the best of Red Hot Chili Peppers here.

The Uplift Mofo Part Plan also occupies a special place in the hearts of both band and fans alike, as it’s the only Chili Peppers album to have been made by their original line-up. Contractual obligations to a side-project group, What It This?, prevented guitarist Hillel Slovak and drummer Jack Irons from appearing on Red Hot Chili Peppers’ self-titled debut album. But while Slovak played on the Chili Peppers’ second album, the George Clinton-produced Freaky Styley, Irons only returned to the fold in time for The Uplift Mofo Party Plan, after vocalist Anthony Kiedis and bassist Flea sacked drummer Cliff Martinez due to his waning interest in the band.

“I felt something I the room that made sense to me”

Yet, while Irons’ return was embraced by his bandmates, the celebrations were muted. As thoughts turned to their third album, the Chili Peppers were carrying two heroin addicts, and Kiedis’ own commitment to the group seemed to waver when he began missing rehearsals. Something had to give – and it did when the singer finally agreed to a stint in rehab. This involved returning to his family in Grand Rapids, Michigan, and while Kiedis initially struggled with it, the experience ultimately made a positive impression on him.

“I had mocked anything to do with sobriety or recovery for my whole life,” the singer wrote in his memoir, Scar Tissue, adding, “But as I sat in that meeting, I felt something in the room that made sense to me. It was nothing but a bunch of guys like me, helping one another get off drugs and find a new way of life… Some of them were clean and some of them were getting clean… and they were being honest about it and unafraid to say how fucked up they were. It flashed on me that if I did this, I could be clean.”

“There was an excitement to it which I liked”

Kiedis’ new-found sobriety re-stoked his fire for his band. In celebration, he wrote the lyric for a new mission statement of a song, Fight Like A Brave, on the flight back to Los Angeles (“Fight like a brave, don’t be a slave/No one can tell you you’ve got to be afraid”). The vocalist re-joined the band as they began pre-production for The Uplift Mofo Party Plan with their new producer, Michael Beinhorn, who had inherited the Peppers almost by default.

“No one knew what to do with [the Chili Peppers] at the time, their record label didn’t understand them,” Beinhorn later told Tape Op magazine. “I thought they needed a lot of help with arrangement, as their music all seemed kind of abstract, but there was definitely an excitement to it which I liked.”

The Uplift Mofo Party Plan sessions took place at Hollywood’s Capitol Studios in May 1987. As Hillel Slovak was still struggling with substance issues, and Anthony Kiedis relapsed after remaining clean for 50 days, things didn’t always run smoothly. For the most part, though, the band’s creativity was at an all-time high, resulting in plenty of moments to cherish.

“This is the best thing we’ve ever done. I can’t wait to release this record!”

“We had a great time making the record,” Kiedis wrote in Scar Tissue. “It was inspiring to see Jack Irons back in the mix. He added such an important different element to our chemistry… He was a nice element, really hard-working, joyful and supportive.

“When it came time to record the vocals, I used Hillel as my band mate/vocal producer,” the singer added. “Every time I did a vocal, we both felt like I was going to a new place and that these were the best vocal expressions I’d put down on tape. Hillel was ecstatic, running in between takes, going ‘I’m telling you, this is the most beautiful thing we’ve done. I can’t wait to release this record!’”

Aside from providing Kiedis with the necessary encouragement, Slovak also made like the Chilis Peppers’ very own Jimi Hendrix on The Uplift Mofo Party Plan. The guitarist’s dynamic playing added pizzazz to the crunching punk-funk anthems Fight Like A Brave, Me And My Friends and No Chump Love Sucker, but he also relished the opportunity to show he had more to offer than merely muscle and flash. Slovak’s bottleneck slide part led the way on the swaggering Walking On Down The Road, while on Funky Crime he cleverly incorporated a talk box, a device popularised by Peter Frampton which creates psychedelic sound effects when sung into it via a tube.

“It was a song that could be a hit”

However, Slovak made his most telling contribution to The Uplift Mofo Party Plan’s centrepiece, Behind The Sun. Arguably the Chili Peppers’ first truly seismic song, this beatific slice of psych-pop heaven was framed by Slovak’s layered guitars and further enhanced by his ingenious sitar part. The guitarist was unsure about whether it was a good fit for the band, but Michael Beinhorn quickly saw the song’s potential.

“Hillel had this unusual, melodic riff, and Beinhorn felt it was a song that could be a hit,” Anthony Kiedis recalled. “He worked with me on the melody, knowing that it wasn’t my forte to get wrapped up in a pretty song.”

“We were infiltrating the psyche of American youth”

Red Hot Chili Peppers were convinced the exciting, genre-straddling The Uplift Mofo Party Plan marked the peak of their achievements to date. But despite arriving with an excellent promo video referencing the then current Iran-Contra political scandal, the infectious Fight Like A Brave made little impression on the charts, while the group’s label inexplicably refused to release the irresistible Behind The Sun as a single at all (it would receive a belated release in 1992, following the breakthrough success of Blood Sugar Sex Magik.

Released on 29 September 1987, The Uplift Mofo Party Plan fared little better in the commercial sense, placing them among like-minded US acts, such as Living Colour and Faith No More, who were still at least 12 months shy of achieving major mainstream breakthroughs. Nonetheless, it laid vital groundwork for the Chili Peppers in the wider scheme of things. The album took the group into the Billboard 200 for the first time (it peaked at No.128 on a lengthy climb to gold status) and its supporting tour – which factored in the band’s first full-scale UK and European jaunt – led to a rapid increase in the Chili Peppers’ fan base.

“We played some of the greatest shows of our lives on that tour,” Anthony Kiedis later wrote in Scar Tissue. “We crisscrossed the country, charging these small stages for hundreds of willing and beautiful customers. Kids would come out of the woodwork to rock out with this different outfit from Hollywood. We weren’t part of the punk-rock movement, or the or post-punk movement, we were a different animal. I had no idea how these kids even knew about us… but we were definitely infiltrating the psyche of American youth!”

Sadly, though, Red Hot Chili Peppers would have to endure a major trauma before they tasted far greater success. During the European leg of the tour, Kiedis and Slovak had both strived to stay clean of drugs, but on their return to Los Angeles in June 1988, they both began using again – with disastrous consequences. Some days later, having not seen their guitarist in a while, the band attempted to contact Slovak, but were unable to find him. The police to discovered Slovak’s body in his Hollywood apartment on 27 June 1988. Tragically, the autopsy determined that the guitarist – who was only 25 years old – had died from a heroin overdose two days earlier.

Inevitably, the death of their close friend almost destroyed the Chili Peppers. Already overwhelmed with grief, they were thrown into a tailspin when Jack Irons announced he was quitting the group, as he simply couldn’t come to terms with Hillel’s death. Yet, while Flea and Kiedis completely understood Irons’ decision, their friend’s passing only spurred them on to regroup and create a new version of the band. The Chili Peppers would return in 1989, with their fourth album, Mother’s Milk.

“Even though I was still a mess, Flea and I hunkered down,” Kiedis later recalled. “I was in no great mental shape… But Flea and I did not plan on stopping playing music together. It wasn’t out of lack of respect; it was out of respect. This was something Hillel had helped build, and we were going to keep on building it.”