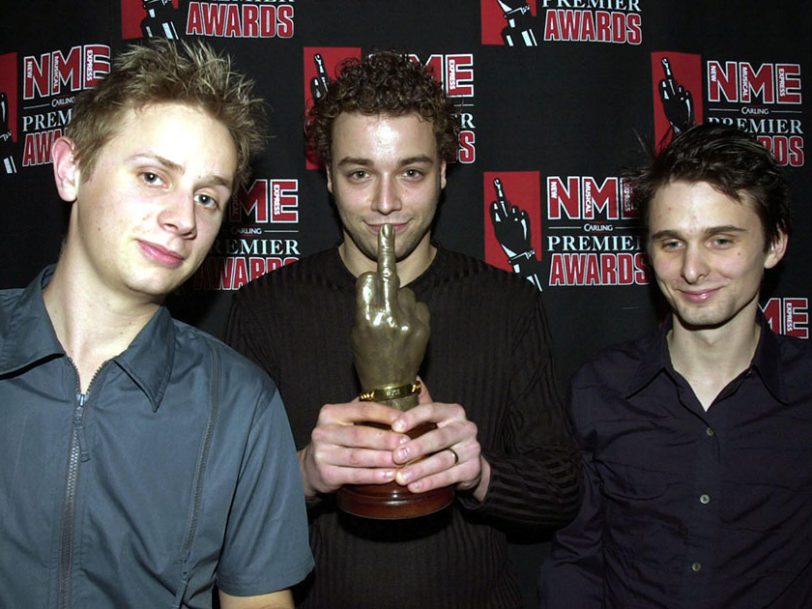 ‘Showbiz’: Muse’s Debut Album Was A Launchpad To Dizzying Heights

When they first formed, in 1994, Muse didn’t think their music was good enough to win a high-school battle of the bands, much less set the charts on fire. But they were mere teenagers at the time and, like any other aspiring rockers, their ambition strayed little further than merely hoping they would be good enough one day. So instead they entered the competition with the intention of making a statement. Billed as Rocket Baby Dolls, Muse took to the stage dressed in full goth/glam attire and trashed their gear as a finale. As the title of their debut album, Showbiz, suggests, the group already had one eye on the kind of bombastic theatrics that could gain them notice.

“We always knew they could do it, right from the first show”

The move marked the band out as clear winners of the competition. But in making such a dramatic impression, Muse set themselves up for disappointment. As frontman Matt Bellamy described to Uncut in 2000, “From then on it was pretty much downhill. I think even now that was the peak in the band’s career. That show was magical and it kept us going for years and years, just remembering what that felt like. It’s taken us years to get even close to what that felt like.”

It was a bold statement. Because in the five years since that fledgling show, Bellamy, along with his bandmates, drummer Dominic Howard and bassist Chris Wolstenholme, played their first shows proper supporting Skunk Anansie; had the Dangerous record label formed around them for the release their first two EPs; had the EPs garner significant interest from the UK’s independent music press; were on the bill of the massive Woodstock ’99 festival in New York state; played a US showcase gig for Columbia’s Senior Vice President of A&R Tim Devine and American Recordings’ Rick Rubin; signed a deal with Maverick Records in the US; and then had the label Taste Media formed to release Showbiz.

Such a crammed period between 1998 and 1999, however, meant that the majority of songs that made it onto Showbiz had already been written by 1997. Though the ambitious trio had a vast inventory to choose from – “50 or so” songs, according to Bellamy – they settled on a selection that would be most palatable to the record-buying public. Even in their infancy it seems their songwriting prowess had developed beyond each member’s, at the time, tender 21 years.

Released on 7 September 1999, Showbiz may have been intentionally more straightforward in its scope than Muse’s true capabilities, but, as might be expected of a debut album, it’s a melting pot of all the band’s influences. So let’s start with the obvious one: Radiohead. Sure, there are glimpses of the Brit-rock granddaddies’ electro-grunge on the album, but the alt-rock newcomers lacked the emotional maturity at this stage to stand up to an OK Computer. Similarities in sound may also have come from a partnership with producer John Leckie, who also helmed Radiohead’s The Bends, and whom Bellamy later described as one of the few people who was able to realise the sounds in his head.

It may have been a comparison that Muse took years to shake off – they were long-lumbered lazily with the “baby Radiohead” tag. But to overlook the depth of musical styles the band drew from would be doing them a disservice. Yes, Showbiz is ultimately a hard-rock record – but it’s one that boils down the base elements into satisfying bursts of alt-noise that appease the more discerning rock fans. But if Muse had grunge at their heart, it was wrapped in a sparkling shroud of Queen-esque symphonies and prog-style experimentalism.

Showbiz’s opening track, Sunburn, starts with a pseudo-classical piano passage that explodes in a melee of riffs and frantic soloing. The eerie Muscle Museum hints at the sci-fi influences that would infiltrate Muse’s later work. Fillip’s cacophony of guitars segues into a cabaret-inspired melody. The lilting ballad Falling Down has a country-blues feel. Even the more straightforward rocker, Cave, features unorthodox noises. And Showbiz’s title track delivers all the theatrics its name conjures.

Elsewhere, Unintended is as stripped-back as you might ever hear Muse, yet it’s still bolstered with keyboards and layered harmonies. Uno is a barrage of discordant noise before breaking down into flamenco rhythms. Sober is their best attempt at straight-up grunge, yet here they still can’t resist the weird effects and falsetto wails. Escape is where Muse sound their most Radiohead-esque, and could easily be a take on that band’s Creep. Overdue showcases a Smashing Pumpkins-style alt-rock influence. Hate This And I’ll Love You is epic in its reach and rage, if not length, while Spiral Static closes the album in a volley of avant-prog noise.

“The belief was always there, the confidence and the ability to get where they are today”

All this, remember, was Muse playing it safe. If Showbiz wasn’t big, bold or brash enough in its own right, it stood as a signpost to where the band were heading on albums such as Origin Of Symmetry and Black Holes And Revelations. As such, the album has weathered the test of time and even grown in cult stature in the wake of the fully-formed article Muse have since become. The trio who rapidly outgrew their supposedly rudimentary debut album would even eventually reintroduce its tracks back into their live repertoire.

And yet anyone close to the group at the time of that battle of the bands show never questioned what the fledgling alt-rockers were capable of. As a long-time friend of Muse, Tom Kirk, told Record Collector in 2007, “The belief was always there, the confidence and the ability to get where they are today. Every day on tour now, looking around the venues is still a bit of a surprise, but not that much, because we always knew they could do it, right from the first show.” Showbiz was where it all started in earnest.

Buy Muse vinyl, merch and more at the Dig! store.