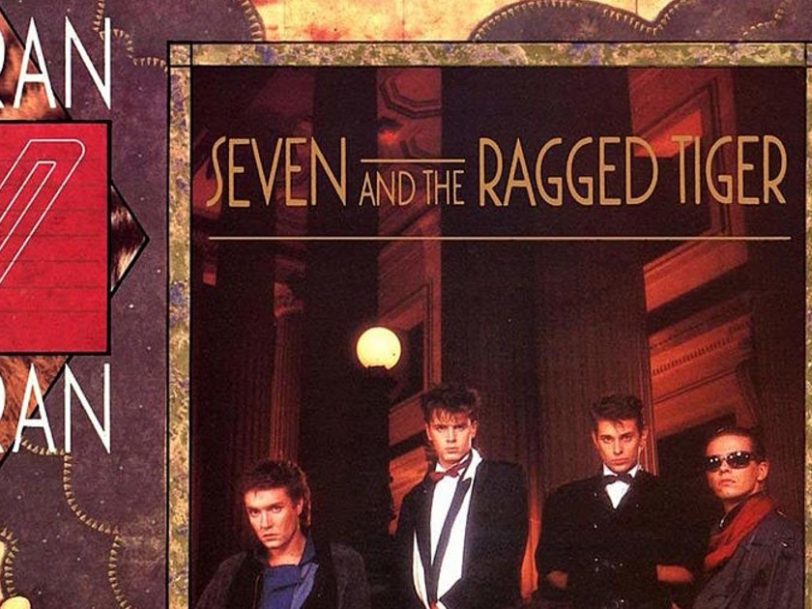 ‘Seven And The Ragged Tiger’: How Duran Duran Roared To The Top Spot

Recorded amid an overwhelming flood of fame, ‘Seven And The Ragged Tiger’ found Duran Duran revelling in glorious 80s excess.

While their fame would eventually settle into something more manageable, the hysteria surrounding the “Fab Five” in 1983, with its evocative echoes of Beatlemania, would prove distracting for Duran Duran as they sought to record their third album, Seven And The Ragged Tiger.

Listen to ‘Seven And The Ragged Tiger’ here.

It had been more than a year since Rio and the era-defining videos for Save A Prayer and Hungry Like The Wolf broke the band in the US. Back home, the punchy power-pop stopgap single Is There Something I Should Know? had even entered the UK charts at No.1 – a rare occurrence for any band back then. With thoughts turning to what would come next, the challenge wasn’t insignificant. Bassist John Taylor later recalled: “I didn’t know my head from my arse by the time we came to starting the album. We’d worked Rio until we were blue, and we had no new material.”

Who can blame such a stark assessment? Tabloid culture may have been in its infancy, but interest in Duran Duran was phenomenal, and there were plenty of entertaining distractions; the global promotional demands were great, and the customary bank of half-baked ideas and demos just didn’t exist. In classic 80s style, the answer appeared obvious: become tax exiles, decamp somewhere fabulous and let the creative juices flow.

Plan A was the south of France, though little emerged from sessions bar a rough cut of Seven And The Ragged Tiger’s future lead single, Union Of The Snake. Plan B was Montserrat, in the Caribbean, and, slowly, new producer Alex Sadkin, who had worked with Robert Palmer and Grace Jones, with assistance from Ian Little teasing out a morsel more. Finally, a stretch in Sydney, Australia, completed the new album’s nine songs.

Duran Duran would create more cohesive records, but Seven And The Ragged Tiger showcases colossal recording budgets, a choppy confidence in the band’s growing dancefloor credibility and some knockout tunes. The Nile Rodgers remix of The Reflex would drive the song to the top of the transatlantic charts in 1984 (and, statistically speaking, the peak of the group’s lengthy career), but the less frantic album version song is masterful funk-pop that contains all the critical raw ingredients of the familiar mega-hit.

Second single New Moon On Monday carries an urgent, rousing melody and an award-winning video (check out its glorious 17-minute movie version), while pop cuts such as the loping (I’m Looking For) Cracks In The Pavement and the jaunty synth riffs of I Take The Dice sounded lush and compelling in that pre-digital era. We’d move into Technicolor, but this material needed to punch its way out of AM radio and the day’s sub-optimal playback equipment.

Closing Side One of the original vinyl, Of Crime And Passion sounds closer to the material on Duran Duran’s debut album, but Seven And The Ragged Tiger’s second-side opener, Union Of The Snake, was calculated to reset the band at an even grander elevation. The song’s flamboyant video and robust musicality demanded attention, so its transatlantic chart peak of No.3 – as opposed to the expected No.1 – shocked everyone.

Elsewhere, Shadows On Your Side is an urgent, melodic gem with the wider record’s trademark percussive muscle locking it nicely between all-out pop and the art-house-leanings of, say, the instrumental Tiger Tiger, which, with its brooding intensity and sweeping theatricality, is undoubtedly the album’s overlooked synth gem. Being in the world’s most famous band probably feels like this track – or at least it did in 1983 and throughout the following year’s epic US tour (captured in the excellent documentary Sing Blue Silver).

Album closer The Seventh Stranger spotlights further evocative atmosphere and offers just a nod towards the tighter funk direction of Duran Duran’s next studio project, the exceptional Notorious (but few would have guessed that would be three years ahead of this record’s release – an eternity in pop terms).

Recorded smack bang in the eye of the storm and issued on 21 November 1983, Seven And The Ragged Tiger (named after the band and its two managers) is the sound of a young band struggling to focus. That the five-piece’s dogged musicality elevated the material beyond its circumstances (and to the top of the UK album charts) is testament to Duran Duran’s capacity for longevity and the sound instincts that have always underpinned the group – at this point no longer just one of the best New Romantic bands, but simply one of the biggest groups on the planet. So fantastically of its moment, the album is 80s excess in glorious exuberance. Dressed up, for sure, but there’s plenty to listen to as well.

Check out our best Duran Duran songs to find out which ‘Seven And The Ragged Tiger’ tracks made the cut.