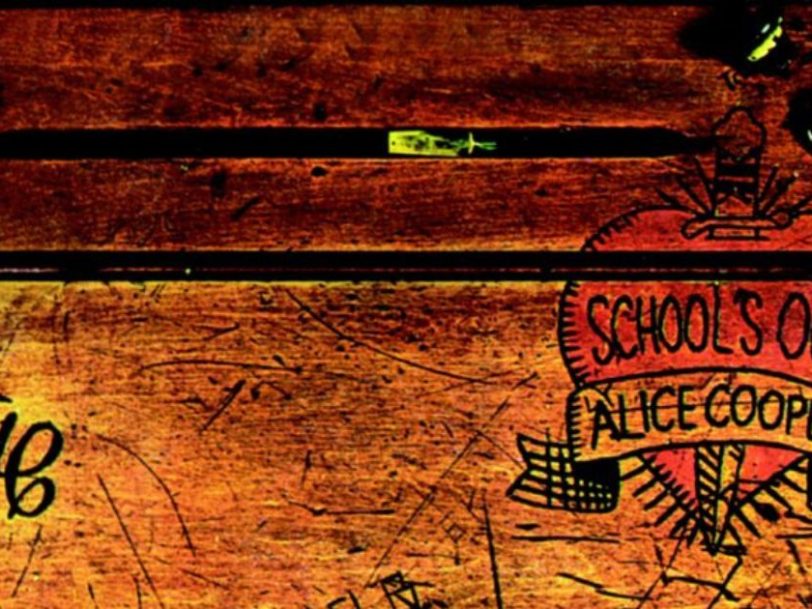 ‘School’s Out’: Why This Alice’s Cooper Album Is In A Different Class

Released in the wake of its hit title track, Alice Cooper’s fifth album, School’s Out, took the legendary Detroit shock-rocker and his band to a whole new level of fame. Peaking at No.2 on the Billboard 200 in the summer of 1972, the record yielded a platinum disc at home, but it also did brisk business abroad, breaking into the Top 5 of the UK album chart and effectively turning Cooper and co into global stars.

Listen to the ‘School’s Out’ album here.

“It’s just such a universal statement”

School’s Out will always be synonymous with its legendary title track, which came from Cooper’s desire to write a song with a universal appeal relating to what he believed to be the greatest three minutes of his life.

“There’s two times during the year,” the singer told Mojo. “One is Christmas morning, when you’re just getting ready to open the presents. The greed factor is right there. The other one is the last three minutes of the last day at school… You’re sitting there, and it’s like a slow fuse burning. I said, ‘If we can catch that three minutes in a song, it’s going to be so big.’”

In his quest to realise his vision, Cooper recalled the phrase “school’s out” from the Bowery Boys movies from the 40s and 50s. These films were based around the exploits of a group of streetwise New York City teens and their desire to rebel against both their parents and the establishment – issues which frustrated kids around the world understood all too well.

Having perfected a lyric all self-respecting teens could identify with (“No more pencils/No more books/No more teachers’ dirty looks”), Cooper put the onus on his band to supply the music – and they didn’t disappoint. Glenn Buxton’s edgy, staccato riff provided the perfect introduction to what remains one of the best songs about school, while bassist Dennis Dunaway and drummer Neal Smith worked up a swaggering rhythm as the ideal foil for Cooper’s aggressive, raspy vocal.

The singer also made a point of keeping the lyrics general so that everyone who heard it could identify with their own experience at school.

“I think even the parents that didn’t like Alice Cooper kind of went, ‘Jeez, when I was in school, that would’ve been my favourite song, too,’” Cooper told Classic Rock in 2017. “It’s just such a universal statement.”

“If that’s not a hit, I need to be selling shoes somewhere”

To complete what immediately became one of the best Alice Cooper songs, producer Bob Ezrin suggested they bring some kids in to sing on it. Ezrin might have regretted the decision after the kids, who had been drafted in from stage school, took one look at the band and immediately wanted to leave. However, after some cajoling, everything went like a dream.

“The kids were scared to death, but I got them to relax and we all had a really good time,” Ezrin told Classic Rock. “By the end of it, the kids were all giggling and laughing, and they loved Alice. It ended up being very effective, and I think one of the best moments in rock history is when those kids sing on that record.”

Having heard the results for himself, Cooper reportedly said, “If that’s not a hit, I need to be selling shoes somewhere.” But there was no danger of School’s Out failing. Following its release as a single, on 26 April 1972, the global public immediately took the anthemic song to their hearts: it leapt to No.7 in the US and did even better across the Atlantic, where it topped the UK singles chart during the summer of 1972.

Yet, while it achieved international recognition and arguably remains Alice Cooper’s signature song, School’s Out has rather overshadowed its parent album. With hindsight, that’s a great shame as, title track aside, the School’s Out album contains some of the most exciting and ambitious music ever realised by the original Alice Cooper band.

Indeed, it’s to the credit of all concerned that they didn’t take the easy option and cut an album’s worth of songs in the same vein as that single. Alice Cooper had been working with Bob Ezrin – a producer renowned for his musicality and arranging skills – since their breakthrough third album, Love It To Death, and both parties were keen to indulge each other when it came time to record School’s Out.

Accordingly, while the album contained further examples of the group’s trademark hard-driving rock’n’roll (most notably on the swaggering Gutter Cat Vs The Jets and the wicked, Rolling Stones-esque strut of Public Animal #9), those songs largely went against the grain.

In one contemporary interview, guitarist and keyboard player Michael Bruce revealed that the band “were now really keen to display the showbiz side” of their music – and, for the most part, they wheel it out with gusto. In fact, School’s Out is rife with flamboyant fare, ranging from the haunting, piano-framed drama of My Stars through to the Mack The Knife-like vaudeville of Blue Turk before it comes to rest with Grande Finale: an aptly-titled denouement during which Ezrin throws in oodles of brass, synths and quite possibly the kitchen sink in a production job of truly epic proportions.

“‘School’s Out’ was an artistic rock landslide success”

Inevitably, contemporary critics expecting more in the vein of the record’s signature hit were a tad perplexed, with Rolling Stone tentatively suggesting, “Not all of School’s Out is, however, rock. A good half is Broadway or movie soundtrack music,” and The Village Voice’s Robert Christgau railing against the record’s “orchestral homages to Uncle Lennie” Bernstein.

Nonetheless, Alice Cooper’s supporters dug both the music and the record’s ingenious sleeve. Designed by Craig Braun – also responsible for The Rolling Stones’ Sticky Fingers zipper artwork – it opened up just like the wooden school desk depicted in the main image, shot by photographer Robert Otter; inside, the record was wrapped in paper underwear. It all added up to a highly attractive package which kept Alice Cooper right in contention at a time when other exciting, theatrically inclined artists such as Roxy Music and Ziggy Stardust-era David Bowie were starting to flirt with the mainstream.

“School’s Out was an artistic rock landslide success,” Cooper himself said in Ian Cranston’s Experiencing Alice Cooper: A Listener’s Companion. “We were bigger than ever. I strolled onstage wearing a top hat and cane, and kids started wearing top hats and make-up on the back streets of London. People actually wanted to look like Alice Cooper.”

Find out where School’s Out ranks among our best songs about school.