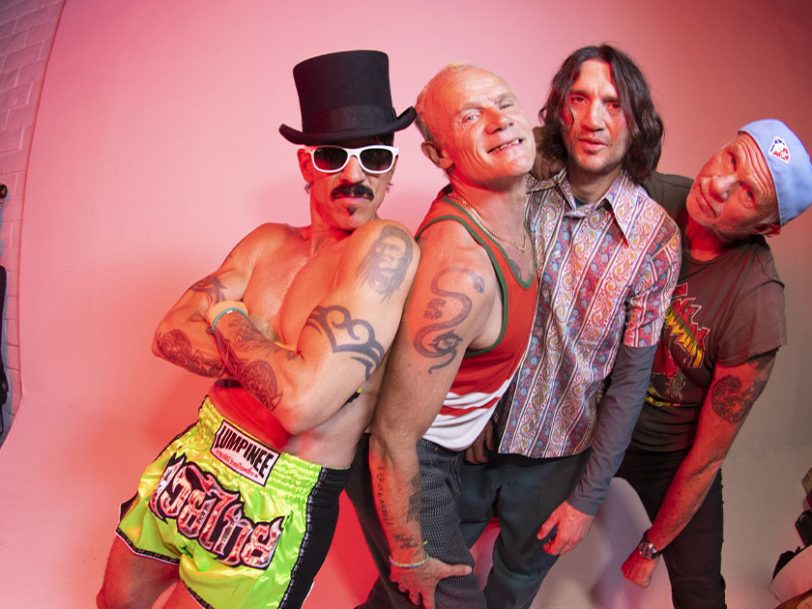 ‘Return Of The Dream Canteen’ Review: Another Feast From Red Hot Chili Peppers

With the eclectic and exhilarating double-album ‘Return Of The Dream Canteen’, Red Hot Chili Peppers pick up where ‘Unlimited Love’ left off.

In an era of farewell tours and unexpected reunions, it’s often suggested that new albums aren’t a priority for rock veterans. If that really is the case, Red Hot Chili Peppers didn’t get the memo, for their freshly minted 13th album, Return Of The Dream Canteen, arrives barely eight months after the hotly-anticipated Unlimited Love.

Listen to ‘Return Of The Dream Canteen’ here.

Matching its predecessor for quality and execution

To put that into a broader context, it should also be emphasised that Unlimited Love featured 17 tracks across its 73-minute running time, and Return Of The Dream Canteen boldly repeats this same format, clocking in at 75 minutes. Taken together, that means the Chili Peppers have now issued two double albums’ worth of material in well under 12 months – a strike rate even notoriously prolific mavericks such as Prince or Guided By Voices would likely applaud. That alone is quite a feat, proving that albums still matter in the 2020s, despite a prevalent industry focus on playlist placement and singles streams.

All that is laudable in itself, but what really matters here is that Red Hot Chili Peppers have also maintained the high standards required to make a success of such a daring endeavour. NME’s review of Unlimited Love rightly noted the album featured “a lot… both in scale and ambition”, but the good news is that Return Of The Dream Canteen comfortably matches its predecessor in terms of quality and execution.

Inevitably, a lot of Unlimited Love’s advance publicity leant heavily on guitarist John Frusciante returning to the fold for his third stint in the band – and that was wholly justified. As Rolling Stone observed, “Frusciante’s absence always leaves a piece of the puzzle missing”, and Unlimited Love made it clear his return had given the Chili Peppers a necessary shot in the arm. With long-term producer/unofficial “fifth member” Rick Rubin also back behind the console, the evergreen Los Angeles outfit were back doing what they do best, and they consolidate that in style with Return Of The Dream Canteen: a multi-faceted album which respects their past while embracing the future.

Veering deftly from rubbery funk to a direct, anthemic chorus, opening track Tippa My Tongue confirms the Chili Peppers have their groove back in no uncertain terms. Brimming with confidence, the song rams the point home with a line which feels like a reaffirmation of faith in their signature punk-funk sound: “We’ve only just begun/Funky Monks are on the run!”

The group also make their cross-pollination of styles sound effortless on their Van Halen tribute, Eddie, on which Frusciante shreds mercilessly during the home strait, and on quintessentially mellow, groovy fare such as Roulette, the sun-kissed Bella and the lush Afterlife, which comes across as a chromatic cousin of Unlimited Love’s flagship hit, Black Summer.

But though Red Hot Chili Peppers are on familiar ground with these songs, it never feels as though they’re coasting, and for a significant chunk of Return Of The Dream Canteen, frontman Anthony Kiedis and co are clearly embracing their desire to accept fresh sonic challenges. The first hint of new developments comes on the album’s third track, Reach Out, which sports a curious, Captain Beefheart-esque verse structure before lurching back into focus with a chorus that takes no prisoners whatsoever. It’s cool, if a little quixotic, as is My Cigarette: an unlikely – yet undeniably successful – venture into Barry White territory built around an old-school drum machine beat, smooth keyboards and a sensual sax solo.

During Return Of The Dream Canteen’s final third, the Chili Peppers make a concerted push into unfamiliar territory, yielding striking results in the process. The pretty Handful opens with bassist Flea leading the way with one of his most gravity-defying riffs, around which the band build a melancholic reggae-inspired tune akin to the Unlimited Love highlight She’s A Lover.

From thereon in, there’s barely a hint of funk on tracks such as the visceral, Nirvana-esque rocker Bag Of Grins; the propulsive indie-pop anthem The Drummer (its title presumably a nod to sticksman Chad Smith’s vocal turn); or La La La La La La La La, a solemn ballad framed with piano, synths and an impassioned Kiedis vocal which quickly transcends its nonchalant title.

The experimentation continues as the band race towards the end, with Copperbelly’s tricksy, waltz time signatures giving way to an imperious chorus, and the classic-rock shape-throwing of Carry Me Home prefacing the album’s closing track, In The Snow: a sparse, minimal lament featuring the reappearance of the drum machine and a brief spoken-word interlude from Kiedis which makes for a compelling postscript.

Return Of The Dream Canteen stands as an eclectic, enticing and frequently exhilarating follow-up to Unlimited Love. In advance of the album’s release, Red Hot Chili Peppers have said the album is the end result of their recently realigned classic line-up having found a “slip stream of sound and vision” which they “just kept mining”. We should be glad they persevered. This rich seam of music suggests there’s still plenty of gold in them there Hollywood Hills.