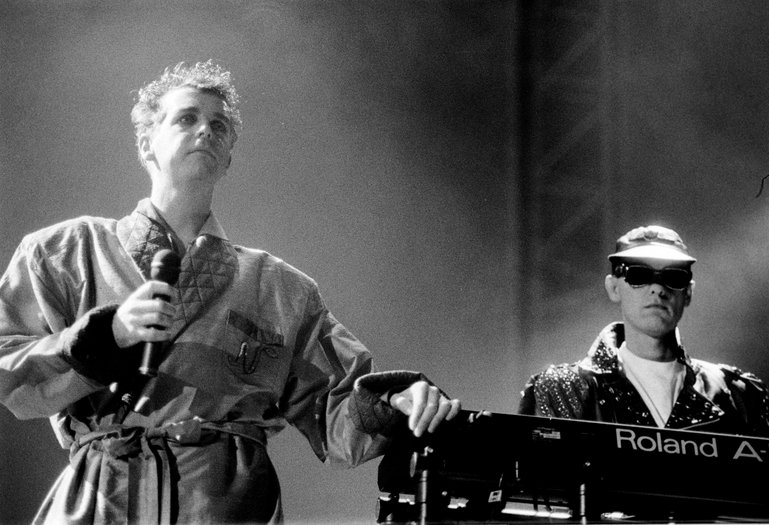 Pet Shop Boys’ Discovery Tour: A Revelation On The Road

As Pet Shop Boys’ Discovery Tour wound its way through Singapore, Australia and South America in the final months of 1994, Neil Tenant and Chris Lowe did, indeed, make a discovery: they didn’t need to rely on high-concept staging and restrictive choreography in order to put on a show. All they needed was to turn up at a venue, armed with their increasingly bullet-proof catalogue of songs, and give fans a night they’d never forget (though a few choice costume changes wouldn’t go amiss…).

Across 13 cities and 20 concerts, from late October through to mid-December 1994, that’s exactly what Pet Shop Boys delivered: hits-stuffed sets that, liberated from the multimedia demands of their Derek Jarman-helmed 1989 MCMLXXXIX tour and the theatrics that defined their Performance shows of 1991, doubled-down on the abandon of their most club-friendly music. By the time the Discovery tour pulled into Rio De Janeiro for three nights across 9, 10 and 11 December – filmed by a local crew for the Discovery: Live In Rio 1994 concert film – it’s like Pet Shop Boys were firing the starting gun for the city’s annual carnival two months early.

“We’re more free-spirited on this tour”

“We wanted to define a way Pet Shop Boys could perform live, without turning into a rock band,” Neil Tennant told journalist Chris Heath in early October 1994, during rehearsals for the tour. “Other groups who make their music using synthesisers and sequencers in the studio always tend to turn into rock bands when they play live, and it never sounds as good.”

“We’re still the same,” Chris Lowe added, “but the attitude of the performance is different. We’re more free-spirited on this tour… It’s not a totally choreographed, staged and rehearsed show. I suppose it is more rock’n’roll in its attitude.”

Pet Shop Boys’ Discovery shows were, indeed, stripped back… by Tennant and Lowe’s standards, at least. The performances were still replete with videos, dancers and costume changes – what Tennant called a “costume greatest hits” for audiences that had never seen the duo live before. At Rio, Tennant still took to the stage for I Wouldn’t Normally Do This Kind Of Thing in a Beatles-style moptop wig and black PVC jacket – Hamburg-era Fabs, by way of New York’s LGBTQ club scene – and stepped out in a gold lamé suit for an acoustic mini-set, newly conceived for the Discovery tour. The silver cone hats, too, were present and correct for Go West, while Tennant’s Pope outfit, reserved for It’s A Sin, inevitably raised one of the biggest cheers of the night.

But it was the acoustic part of the show which, surprisingly, caused Neil Tennant some of his biggest difficulties. Despite being the most low-tech part of any Pet Shop Boys show in history, the singer, used to having “performers around us, to take the heat off us”, initially struggled to acclimatise to being front and centre on his own, as he sang Rent and Suburbia with just an acoustic guitar for protection. As he noted into a recorder – later used as the basis of a tour diary – on 3 November: “The problem with me playing guitar is that I’m not used to playing the guitar standing up. I find it much easier sitting down.”

By the time the Discovery tour got to Rio, Tennant had snagged himself a stool, but the question of stage presence defined his experience of the tour: “I don’t think I am a performer and therefore wonder what I’m doing on stage in front of all these people,” he said just hours before the tour opened. A week later, the shows had become “nerve-wracking”; starting audience clapalongs didn’t come naturally: “This kind of show, which relies on performance, and particularly on me making contact with the audience, is very exhausting. You have to think all the time what you’re doing.” On 5 November, in the early hours of the morning, before closing a three-night run in Sydney, Tennant had yet to settle in to the experience: “Afterwards it seems like it was fantastic but during the show I’m thinking all the time what I’m doing next, and where do I move now and what kind of movement to do with my hands.”

“It was the dreaded nudity”

Not that Pet Shop Boys were entirely alone onstage for the Discovery shows, but while on previous tours their presence had been bolstered by dancers “pretending to be in a street or fighting in a nightclub”, ensuring the group were “always removed from the audience by theatrical convention”, as Tennant told Chris Heath, the dancers they took on the road this time out were – fittingly, for the show captured on Discovery: Live In Rio 1994 – Brazilian go-go dancers who had no theatrical training.

Inspired by the Sound Factory in New York City (“We liked the fact that they had live drummers playing along with the music, and they had these naked men go-go dancing with flags around them,” Tennant recalled), the duo deliberately hired dancers with no theatrical training, whose movements would appear more natural on stage. “For this kind of dancing, you need people used to dancing in clubs,” Lowe noted.

For the authorities in some cities, however, the dancing was too natural – or, rather, too au naturel. Neil Tennant may have been resplendent in his “costume greatest hits”, but the go-go dancers – Mirelle Diaz, Nicole Niciotis, Flavio Cecchetto and Paulo Henrique – redressed (or undressed) the balance, often appearing in thongs and the shortest of short shorts. During opening night, in Singapore, on 26 October, local police took tour manager Ivan Kushlick aside to discuss a few issues: “It was the dreaded nudity,” Tennant, who spotted the conversation when he came off for the interval, recalled later that night. “The police said that if the dancers didn’t wear something more decent than the little clip things they wear, to protect their decency, then in the second half they’d turn the lights on and stop the show.” It was agreed that, during It’s A Sin the dancers would wear “shorts or something” instead.

Effectively a greatest-hits set, the performance captured on Discovery: Live In Rio 1994, had no shortage of show-stopping moments, among them One In A Million (craftily segued into Culture Beat’s Mr Vain), It’s A Sin (prefaced with singer Katie Kissoon’s roof-raising rendition of I Will Survive) and Pet Shop Boys’ gauntlet-throwing cover of Always On My Mind. Dispensing with the latter within the first ten minutes of the show suggested that, whatever misgivings the duo may have had about exposure – whether that be the dancers’ more intimate body parts or their own insecurities as performers – they had no concerns about the strength of their music.

“We went through our records and chose uplifting songs with a party sort of vibe,” Chris Lowe recalled of deciding what made the cut for the Discovery tour setlist. “Particularly as we knew we were going to have congas playing along, we decided we wanted a Latin dance vibe.”

“That was another reason we thought about touring South America,” Tennant revealed to Chris Heath during rehearsals. “We thought it would be interesting to, you know, hear different music on the radio.”

With 15 UK Top 10 hits to their name – four of them No.1s – by the time Pet Shop Boys’ Discovery tour rolled into town, they’d had plenty of experience of hearing their own music on the radio. For some critics, those recordings defined the group as a studio band (an opening-night review “said that we weren’t really a live act”, Neil Tennant recalled, laughing in agreement: “I suppose there’s something to be said for that”) but, for Pet Shop Boys, the Discovery shows offered an opportunity to present themselves as they were while taking stock of how they’d evolved.

Pet Shop Boys’ Discovery: Live In Rio 1994 has been reissued on DVD and 2CD formats. Buy it here.