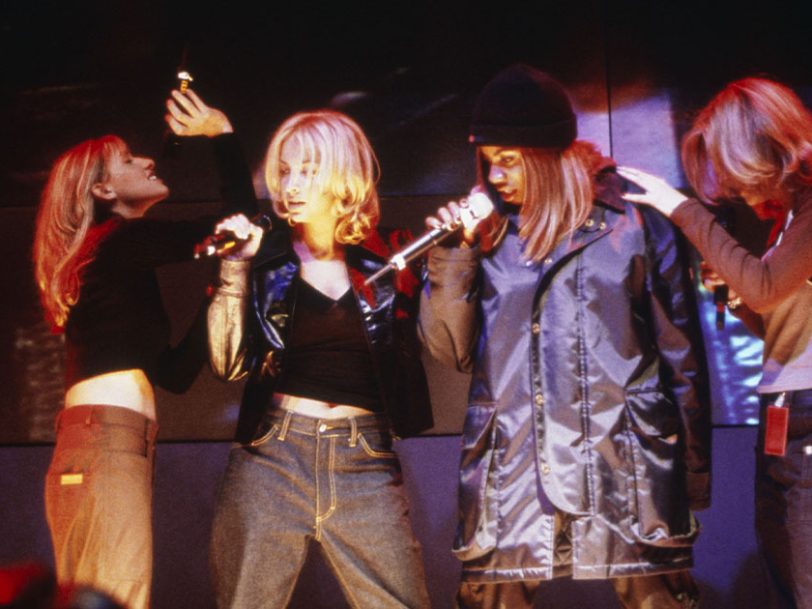 Like so much great artistic expression, All Saints’ chart-busting 1997 song Never Ever began with heartbreak. Shaznay Lewis, a phenomenally talented young songwriter, had just broken up with her boyfriend. She felt vulnerable and confused; she wrote what she felt, she expressed her grief, she tried to convince herself that “the feeling won’t last too long”. The band Lewis was part of, All Saints, treated her words tenderly. Together, the four women crafted what’s still remembered as one of the best 90s songs.

Listen to the best of All Saints here.

“There were all these manufactured groups, and then there was us”

Lewis and her friend Melanie Blatt had known one another for years. They were in the group All Saints 1.9.7.5. (so-called because of All Saints Road, in Notting Hill, London, and the members’ birth dates) but, after two flop singles, and with one group member already having left, All Saints 1.9.7.5. clearly weren’t working out. They were dropped by their first label, ZTT, and flat broke. “We lived on fritters from a West London café where Mel had a tab, which is still outstanding,” Lewis said in 2003. “We used to say, ‘We’ll pay you back because we’re going to be big one day.’”

There was something about the name All Saints that stuck, though. Via a chance meeting, Blatt reconnected with an old school friend, Nicole Appleton, and brought her into the group; then Nicole’s sister Natalie joined, too. The Appleton sisters were not only distinctive singers, they were also more extroverted than Blatt and (particularly) the shy Lewis. Early on, the Appletons’ chutzpah and self-belief brought All Saints an experienced manager, John Benson, and the confidence to turn down inappropriate label offers. “None of them cared about the songs,” Natalie Appleton said of these record companies. “They would demand that we started showing our ‘feminine side’. We’re not boys. We can dress like elegant women and we love to look good, but when we do our music, we want to be comfortable.”

Never Ever was the standout song on All Saints’ demo tape, and it won the group a deal with London Records. Lewis has claimed that, initially, the other three members recorded the song without her. They then touted this version to the label head. “He asked who had written it, so then they were forced to come back and get me,” Lewis said in 2004, after the band had broken up for the first time. “I think that’s why the whole time I knew that if I didn’t write I’d be out on my ear.”

The personality differences and individual ambitions revealed by this anecdote are telling. It speaks of a volatile band, where communication could be less than transparent. In time, these issues would destroy the first incarnation of All Saints but, as the group were on the cusp of success, these tensions were still largely kept in check.

Following their successful debut single, I Know Where It’s At – a slick slice of party R&B – the emotional heft of Never Ever came as a surprise to many. While the song itself (which Lewis crafted with co-writers Robert Jazayeri and Sean Mather) was the clear bedrock, the performance of all four group members is essential. Nicole Appleton, in particular, delivers a spine-tingling spoken-word intro, sitting alongside The Angels’ My Boyfriend’s Back, Blondie’s X Offender and Prince’s Let’s Go Crazy as one of the greatest of its type. The voices of Nicole, Natalie, Mel and Shaznay all bring out the best in one another – and while the bulk of the vocals were recorded in Washington, DC, Nicole Appleton’s raw intro was retained from the original demo recording.

All Saints had emerged slightly after Spice Girls, to whom they were often compared. But it was a link based on gender and little else. “There were all these manufactured groups, and then there was us,” Natalie Appleton said in 2018. “It was almost like, ‘There’s All Saints in the corner, staring, growling’’” As well as All Saints’ moody image, there was a real darkness to Never Ever, its lyrics not shying away from portraying destructive thought patterns and extreme anguish. This differed greatly from Spice Girls’ positivity and multicolour personas – listening to the two groups side-by-side, the gulf between them is obvious.

One of the best All Saints songs, Never Ever was popular right from its release, on 10 November 1997. Its chart ascent was helped by several Top Of The Pops performances, the group members performing in a memorable circular format and rejecting the usual choreographed dance routine in favour of a swinging, shrugging gait. The song took up residence in the UK Top 10 towards the end of 1997, but it initially seemed destined to fall short of the top. A strange combination of Spice Girls, Teletubbies, and the Children In Need charity single Perfect Day all took turns at No.1, keeping All Saints at bay. In fact, Never Ever sold 770,000 copies before it topped the charts – the highest level of sales for any single not to reach the top spot.

Finally, on 17 January 1998, Never Ever made it to No.1. It ended up spending 24 weeks on the UK chart in total, and is the 14th biggest-selling single of the 90s in the UK. All Saints would go on to create many more classy, effortlessly cool records – and have further No.1s – but Never Ever retains a unique power. As Lewis herself said: “I never believed that so much good could come out of a bad situation.” Her catharsis ultimately worked not only for her, but also for millions of others who had felt the pain of a confused relationship breakdown, and could express their hurt through this immortal pop classic – one of the best breakup songs of all time.

Find out where Never Ever ranks among our best All Saints songs.