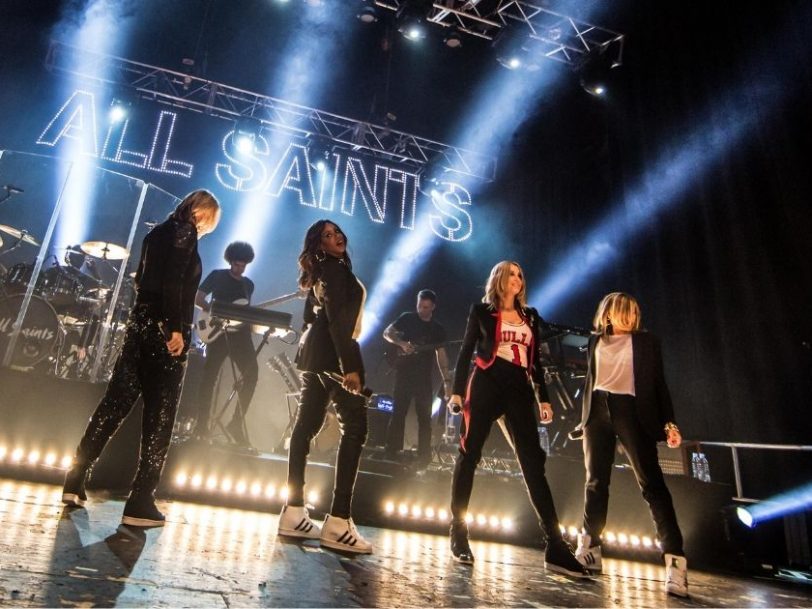 Best All Saints Songs: 10 Streetwise Hits From The Pure Shores Of Pop

Blending R&B smarts with electronic experimentalism, the best All Saints songs set the group apart from the UK pop crowd.

Back in 1996, Shaznay Lewis and Melanie Blatt were joined by Canadian sisters Natalie and Nicole Appleton to form All Saints. Their cool image and streetwise R&B smarts set them apart from the pop crowd and, by the end of the following year, they had a worldwide hit with their second single, Never Ever. There was more to the group than that, though. Get your cargo pants on for the ten best All Saints songs…

Listen to the best of All Saints here, and check out our ten best All Saints songs, below.

The second single taken from 2007’s Studio 1 album, Chick Fit was propelled by tribal drums and took inspiration from MIA on the verses, adding an infectious chorus to create a pop juggernaut. Still, it wasn’t enough to keep All Saints together, and would be the last single from the group for nearly a decade.

After the more experimental Pure Shores and Black Coffee, this raunchy third single from 2000’s Saints & Sinners album (the group’s eighth UK Top 10 single in a row) offered a reminder of All Saints’ US R&B influences. With a low-slung, funky bassline and slinky harmonies reminiscent of TLC, it stands as one of the best All Saints songs, even as it closed the first chapter of their career; the group announced a hiatus shortly after its release.

Also from Saints & Sinners, Dreams came from the curious writing team of Natalie Appleton, Cris Bonacci (of metal band Girlschool), 80s pop star Samantha Fox and producer William Orbit. Starting as a traditional-sounding acoustic number, it soon mutates into a melancholy and meandering futuristic R&B ballad: Orbit throws cinematic strings in alongside electronic beeps and whirrs over a trip-hoppish beat, but the thing that shines through is the ridiculously catchy chorus.

The group’s comeback single after taking a break in 2001, Rock Steady was the first taste of All Saints’ new sound, which incorporated elements of Caribbean ska, reggae and – unsurprisingly – rocksteady. Written by Shaznay Lewis and US producer and songwriter Greg Kurstin (best known for his work on Adele’s mega-selling 25), the ice-cool chorus elevated it among the best All Saints songs and helped the single reach No.3 in the UK.

A sassy statement of intent, I Know Where It’s At immediately established All Saints as a pop group with enough in the way of R&B credentials to set them apart from the pack. Coming on like a UK take on the slick, pop-with-a-New-Jack-Swing edge of En Vogue, I Know Where It’s At was an instant hit, reaching the Top 10 in the UK and the Top 40 in the US. Recognise that piano sample? It’s from Steely Dan’s double-entendre-ridden 1976 song The Fez, a lift that meant Walter Becker and Donald Fagan received writing credits on tune.

The fourth single taken from All Saints’ self-titled 1997 debut album, and the group’s third UK No.1 in a row, the effortlessly cool Bootie Call was the most explicit declaration yet of the band’s taste for harder-edged US R&B. While the subject matter might have caused a few awkward moments as families sat down to watch Top Of The Pops together, the lyrics are forward-thinking, advocating safe sex.

The lead single from the group’s fourth album, 2016’s Red Flag, One Strike saw Shaznay Lewis channel the turmoil that bandmate Nicole Appleton was going through after the breakdown of her marriage to Liam Gallagher. A mature entry among the best All Saints songs, Lewis elaborated on writing it in an interview with i-D: “The phrase ‘one strike’ is about how your life can just change in one instant. You can be walking down the road, you’ve just left your family at home and everything’s hunky dory, then when you go back home, they’re gone. On one side of the door your life’s amazing, on the other side it changes just like that.”

All Saints’ biggest hit to date and the third-biggest-selling single by an all-female act in the UK (after Wannabe, by Spice Girls, and Shout Out To My Ex, by Little Mix), Never Ever was the group’s true breakthrough. Topping charts worldwide and even reaching No.4 in the US, it found Shaznay Lewis pouring her heart out into a smooth breakup ballad in which strength and vulnerability are two sides of the same coin, as she told PRS For Music in 2020: “At that time, I had my first teenage relationship and was heartbroken, so it was perfect timing to suddenly realise just what a broken heart can produce.” While the slick, Amazing Grace-like verses and that earworm of a chorus established the four-piece as a force to be reckoned with in the pop-R&B stakes, it’s the spoken-word, grammatically questionable intro (surely there are a few “answers” that she needs to know?) that grabbed listeners’ attention.

Where All Saints’ 1997 debut album had been steeped in US pop and R&B influences, their 2000 comeback single represented a huge stylistic and artistic leap. Pure Shores was co-written by Shaznay Lewis and producer William Orbit and marked a shift towards the ethereal electronic pop with which he’d made his name (in particular on Madonna’s 1998 album, Ray Of Light). The instrumental track had already been put together by Orbit to be used in Danny Boyle’s 2000 film, The Beach, and Lewis was tasked with turning it into a song, as she remembered in a 2020 interview with Huffington Post: “They showed me less than a minute of a clip [from The Beach] of where it was going to go, [played] the backing track and asked me to write to that based on that scene. It was a free rein once they’d shown me the clip… They didn’t really point me in any direction of how they wanted it to be lyrically.”

The only All Saints single not to feature a Shaznay Lewis writing credit, Black Coffee started life as song recorded by Italian singer Kirsty Bertarelli back in 1997. Then called I Wouldn’t Wanna Be, it was shopped around record labels until London Records co-founder Tracy Bennett heard enough potential in it to insist that his then-new group All Saints record it. The song went on the back burner until the William Orbit-helmed sessions for 2000’s Saints & Sinners, during which Lewis, Mel Blatt and Orbit worked it up with a bold new arrangement and renamed it Black Coffee.

In All Saints’ hands it became an off-kilter pop triumph – their most experimental single and their last UK No.1 to date. Topping our list of the best All Saints songs, Black Coffee begins with Lewis singing the verses accompanied only by jarring, squelching synths before the bridge beckons in ambient washes and cool, distracted harmonies. It all leads up to a belter of a chorus with an infectious melody underpinned by pulsing electronica. A song with potential had become a pop classic.