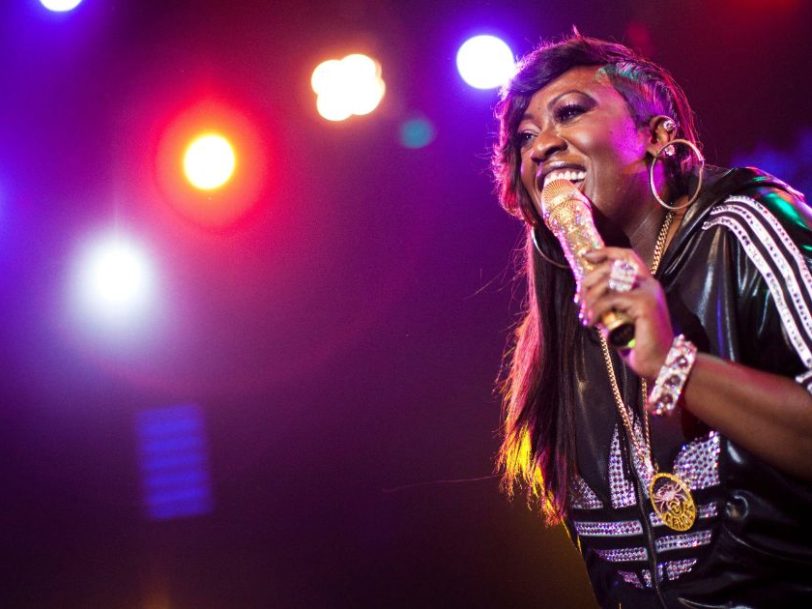 ‘Under Construction’: How Missy Elliott Rebuilt Herself In The 2000s

Taking a moment to survey hip-hop’s history, Missy Elliott used ‘Under Construction’ to deal with grief while still bringing the party.

Five years after Missy Elliott stepped out as a solo artist, there was no denying that she had refashioned hip-hop in her own image. But by the time she came to record her fourth album, 2002’s Under Construction, she had some rebuilding of her own to do. Less than a year after the shock death of her friend and early collaborator Aaliyah, Elliott was back in the studio, recording an album which would not only be a summation of everything she’d achieved to date, but which would also reflect on the losses that had brought her – and the wider hip-hop and R&B communities – to this point in time. Channelling both her grief and her hopes for a brighter future into Under Construction, Elliott would admit to her fans, “I’m a work in progress. I’m working on myself.”

“We all under construction, tryin’ to rebuild ourselves”

Paying her respects to Aaliyah, TLC’s Lisa “Left Eye” Lopes, Tupac Shakur and The Notorious B.I.G. in her spoken-word intro to the album, Elliott made a plea for “the hip-hop family” to come together: “We all under construction, tryin’ to rebuild, you know, ourselves,” she noted. Three decades after its birth in the Bronx borough of New York City, hip-hop had finally “gained respect… just like rock’n’roll. And it took us a lot of hard work to get here. So all that hate and animosity between folks, ya need to kill it wit’ a skillet… Get mo’ paper.”

It couldn’t have escaped Elliott that almost all of those deaths had occurred in roughly the same short space of time that had passed since the release of her debut album, Super Dupa Fly, in 1997. But while that record had brought hip-hop screaming into the 21st century years ahead of schedule, Under Construction, which hit the shelves on 12 November 2002, took a nostalgic look back at what was fast becoming a bygone era – though not before Elliott and producer/co-conspirator Timbaland reminded listeners that they still had the future-funk at their fingertips.

Despite its sombre start, Under Construction quickly found Elliott following where the likes of Prince had gone 40 years earlier with his song 1999: partying in the face of doom. Jumping off from Elliott’s intro, Go To The Floor does exactly as its title demands, Timbaland delivering a trademark juddering beat that folds in on itself as Elliott lays out her intentions: “I came to shake, shake my booty down, down to the beat.”

In the months preceding Under Construction’s release, the rest of the world had been doing just that to its lead single, Work It, making the song Elliott’s biggest hit. Built on a robo-funk rhythm and a seductively squelchy synth line, this “Missy Elliott one-time exclusive” almost never happened, with accident and Timbaland’s exacting quality control both pushing Elliott to deliver one of the greatest hip-hop tracks of all time.

Discussing the song with MTV, Elliott revealed that she and Timbaland had initially been struggling for inspiration. “I remember I begged him to go to some mom and pop stores to get some breakbeats, because we had been in the studio two weeks straight and had a block,” she said. Having “caught this vibe” from the records Timbaland returned with, Elliott laid down some vocals – only for Timbaland to demand more from her.

“With Work It, I made her go back four times,” the producer later revealed to Rolling Stone. “Because I’m like, ‘That ain’t it. That’s not it. That’s not it.’ When she got to that reverse part, I was like, ‘Oh we out here. We’re done.’ When you bake a great cake, you need the right icing on top.”

And yet Work It’s famous hook – in which the lyric “Put my thing down, flip it and reverse it” is itself flipped into reverse – came about by accident. “The reverse thing, that was a mistake,” Elliott later admitted to Associated Press. When an engineer accidentally played a snippet of her vocals backwards, Elliott marvelled at how they still landed perfectly on the beat: “After that happened, I said, ‘Yo keep that in there and I’m going to write around it.’” Topped off with one of the best 2000s music videos – complete with liquid dance moves, Prince and Michael Jackson pastiches, and Elliott swallowing a model Lamborghini whole and DJing amid a swarm of bees – the song left no doubt as to Elliott’s place among the best female rappers of all time.

“You may not feel like I’m a real hip-hop artist, but I don’t have to be”

Following Work It’s release, fans were convinced Elliott had smuggled a hidden message into its backwards hook, but like many of the best Missy Elliott songs, Work It wasn’t shy about its intentions. Having playfully poked at “one-minute men” on her previous album, Miss E… So Addictive, Elliott used Work It to first boast about her desirability, before expressing a voracious sexual appetite for “boys, boys, all type of boys” and offering her female fans some empowering advice: “Girls, girls, get that cash/If it’s nine to five or shaking ya ass/Ain’t no shame, ladies do your thang/Just make sure you ahead of the game.”

Proudly sex-positive in public, rumours inevitably circulated about Elliott’s private life – something she had little time for. “When interviewers ask me who I’m sleeping with or if I don’t like such-and-such or what is my sexuality, that’s not beneficial to the world,” she’d told Interview magazine in 1999, demanding that the media focus on matters that could actually change her fans’ lives. “They need to ask me about stuff that may help readers, like how my father abused my mother for many years. A lot of kids go through that and need to know what they should do.”

On Gossip Folks, Elliott addressed her adversaries directly – “Need to talk what you know/And stop talking ’bout who I’m sticking and licking/Just mad it ain’t yours” – dismissing rumour-mongers who delight in sharing stories about her but won’t support her by buying her albums. If her throaty delivery sounds deranged enough, a guest spot from Ludacris adds extra loopiness to a song whose nonsense chorus, sampled from Frankie Smith’s 1980 hit, Dutch Double Bus, underscores the mindless blather behind headline-grabbing speculation.

“What’s different about this album is it’s old school, it’s like how music used to be”

Under Construction’s hits may have seen Elliott and Timbaland double-down on their commitment to pushing hip-hop into new frontiers, but Elliott also took the time to celebrate the music’s past. Having paid her respects to her fallen contemporaries at the start of the album, on Back In The Day she offers shout-outs to “Golden Age” icons such as Run-DMC, Public Enemy, Salt-N-Pepa and MC Lyte, while calling upon Jay-Z to lend a hand as she recalls how hip-hop culture grew from house parties, dance moves and unity at a time when “no one came through with a gun”.

“What’s different about this album is it’s old school, it’s like how music used to be,” Elliott told Entertainment Tonight at the time of Under Construction’s release. “It’s going to educate the younger kids who might not know how far back hip-hop goes – because for the younger generation, they kind of think hip hop starts at Jay-Z, Nas, Missy Elliott, whoever – but it goes farther back than that.”

Running with the idea, Timbaland lifts freely from the funk and jazz building blocks his forebears used, as if to prove he could have made music this way all along, he was just too busy creating his own beats. James Brown (sampled on Go To The Floor) and Bob James (via Run-DMC, on Work It) had immediately given Under Construction an old-school flavour not often heard in Elliott’s music. With Funky Fresh Dressed the duo took a wholesale leap into the record crates, Elliott’s battle-ready boasts (“My flow is legendary and your style is temporary”, “Don’t try to come before me, unless you are a dummy/Repeat, you’ll lose your teeth and I would hate to call you gummy”) riding classic lifts from Beastie Boys (Paul Revere), UTFO (Roxanne Roxanne) and The Stop The Violent Movement (Self Destruction).

“As a female, I’d rather have control of my stuff. Nobody can tell my vision like me”

In just half a decade and four albums, Elliott had taken her own place in hip-hop’s lineage, despite the fact that her genre-blending music had caused some traditionalists to question her legitimacy. “Far as I’m concerned, I do what I do the best way I can,” she says towards Under Construction’s close, before shrugging off any concerns: “You may not feel like I’m a real hip-hop artist, but I don’t have to be. I grew up on hip-hop, and that’s what motivated me to do music.”

Certainly, Elliott had always been too idiosyncratic to fit into any categories. Speaking to Flava TV a year before Under Construction’s release, she asserted, “For me, as a female, I’d rather have control of my stuff, ’cause I feel like nobody can tell my vision like me… I’m the only one that can really interpret that.” Indeed, the three Under Construction songs that don’t bear a Timbaland co-credit see Elliott take even more control as producer. Among her most personal tracks, they also recall her early years as an R&B singer in Sista and a songwriter for smooth-voiced new jack swing stars such as New Edition and Jodeci.

With frank intimacy, Elliott sings on the slow-jam Pussycat of hoping she can keep her man satisfied “So he don’t want nobody else/But me and only me”. Elsewhere, Nothing Out There For Me stands as a companion song to Supa Dupa Fly’s Best Friends. Where Aaliyah guested on that earlier cut, taking on the role of Elliott’s confidant, here Beyoncé is on the end of the phone, turning down Elliott’s requests for her to hit the club, choosing instead to stay at home with “the only man that I love”.

Elliott expresses her own love on Under Construction’s closing track. Written as a tribute to Aaliyah and “Left Eye”, and performed with TLC, Can You Hear Me sends a prayer all those who have died too young, whether through mishap or foolishly escalating dispute. “Beef back then wasn’t death threats between two artists,” she reminds listeners in her outro, again reflecting on hip-hop’s formative years. “Beefs was, you know, who had the realest skills, who was dopest on the mic.”

Having already taken a shot at “gossip folks” earlier in the album, Elliott closes Under Construction by asking the media to do their part in safeguarding hip-hop’s future: “This shit is kinda in your court. I know sometimes you want the best stories, and you gotta eat, too, just like everybody else. But sometimes we gotta sacrifice, and say the best stories don’t have to be something negative. Let’s not wait until we lose another important MC in the rap game, and start saying, ‘Chill out with the dumb shit,’ and all of that, you know.”

As futuristic as her music has always been, Elliott’s closing message remains distressingly relevant today. With murder and accidental overdose still claiming the lives of young rappers – XXXTentacion, Lil Peep and Juice WRLD among the most recent tragedies – Elliott’s final words on Under Construction encourage listeners to build a better future: “We could all stand for going under a little construction.”

Find out where Missy Elliott ranks among our best female rappers of all time.