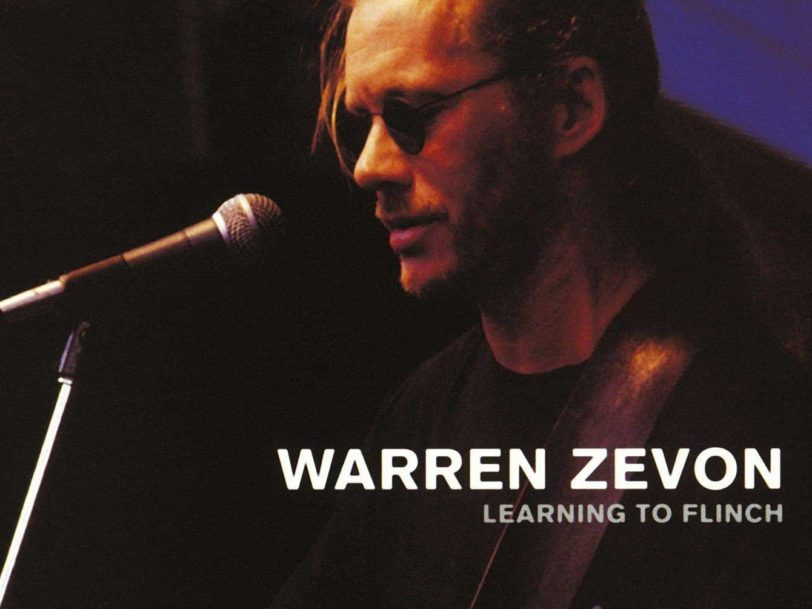 During the five months of his solo acoustic world tour in the summer and autumn of 1992, Warren Zevon said that his apartment was “knee-deep in digital audio tapes”, from the recordings his co-producer Duncan Aldrich had made during 60 different concerts across the globe. From more than a thousand tunes, they selected the 17 tracks that appeared on the final version of Learning To Flinch, Zevon’s second live album, a follow-up to 1980’s superb Stand In The Fire, which had been cut with a band that included David Landau on lead guitar.

Listen to Learning To Flinch here.

Learning To Flinch, another album with one of Zevon’s characteristically eye-catching, original titles, was released on 13 April 1993 and offers a memorable retrospective of his career. “If we record every show, I figured, I’d eventually stop being self-conscious about the fact we’re recording,” Zevon told a New Zealand newspaper during the tour, on which he was accompanied by his chronicler Aldrich, a musician and recording engineer to whom he usually referred as “Doctor Babyhead”.

Zevon chose Splendid Isolation as the opening track on the album, a song which shows off his passionate vocals and his skill on the 12-string guitar. Boom Boom Mancini, which was recorded during the US leg of the tour, at The Flood Zone in Richmond, Virginia, is Zevon’s biographical song about boxer Ray Mancini, which references the death of Mancini’s South Korean opponent Kim Duk-koo during a fight in 1992. Zevon was always interested in the darker side of sport.

Zevon said that his shows during this period “developed into something longer than I originally intended”, often lasting more than two hours, and he jokingly referred to it as his “Miss Saigon tour”. The format of playing solo and accompanying himself on guitar, harmonica and occasionally piano – he plays keyboards on the compelling 11-minute version of Roland The Headless Thompson Gunner – allowed him to strip back some of his best compositions while displaying his virtuosity as a musician. Among the classics included on the album were Mr Bad Example, Excitable Boy, Hasten Down The Wind and Poor, Poor Pitiful Me.

The tour, which started in America and moved on to England, Germany, Belgium, Holland, Denmark, Sweden, Finland, Norway, Italy, New Zealand and Australia, gave Zevon the opportunity to indulge his love of travel. He would try to say a few words in the native language of the country where he was performing, and when he introduced Mr Bad Example in Berlin by wishing the German fans “danke schön” and telling them he was excited (“Ich bin aufgeregt”) to be in Berlin, they cheered wildly, a small moment he chose to keep on the record.

Learning To Flinch also featured three new Zevon songs. Piano Fighter was a wry look at the life of a musician (“Maybe I’ll go to Reno/Nobody knows my name/I’ll play Claire De Lune in a quiet saloon/Steady work for a change”), while the intriguing Worrier King was introduced with a few words taken from Bob Dylan’s song Corrina, Corrina.

Perhaps the best of the new songs was The Indifference Of Heaven, with Zevon, who was 45 at the time, reflecting sanguinely on mortality and the passing of time (“Gentle rain falls on me/All life folds back into the sea/We contemplate eternity/Beneath the vast indifference of Heaven”). The song is a highlight of the album and reflects his interest in spiritual matters. Zevon was an avid reader of the novels of Graham Greene, and his former wife, Crystal, said Zevon would often visit churches while on tour.

Zevon said that he “liked being an entertainer” and felt it was “incumbent on me to make a few jokes and see that the ship doesn’t sink” during the tour – and he seems to be really enjoying himself on a spirited version of the crowd-pleasing Werewolves Of London. He lets the crowd at London’s Town And Country Club finish off the punch line to the verse about a werewolf drinking a piña colada at Trader Vic’s, and they lustily shout out “perfect” about the state of the creature’s hair.

The final date for recordings was on 13 October 1992, and the show at the Burswood Entertainment Complex in Perth, Australia, yielded the sweet version of Searching For A Heart, a moving song about love that had first been released on the previous year’s Mr Bad Example album. Learning To Flinch concludes on a more downbeat note with Play It All Night Long, a sardonic classic from 1980’s Bad Luck Streak In Dancing School album.

Capturing Zevon during an interesting period in his career, Learning To Flinch is a good introduction to a master songwriter at his confident best.