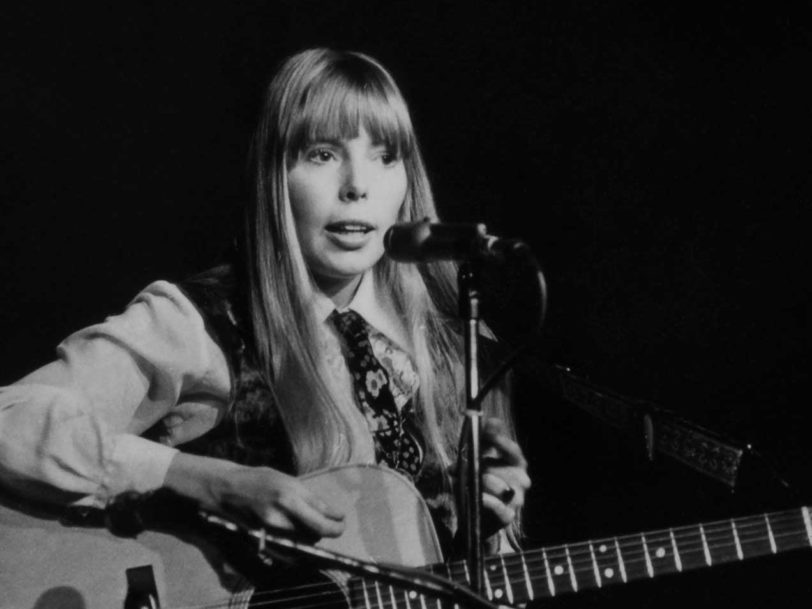 Joni Mitchell: How A Young Songwriter Became The Consummate Artist

Setting the bar for all who followed, Joni Mitchell turned the notion of songwriting inside out, embodying everything an artist should be.

If you’d seen Joni Mitchell in the early 60s, playing in small coffeehouses and nightclubs in Saskatoon, Saskatchewan, Canada, you may have assumed she was one of many other wannabe folk singers, with her delicate voice and gentle guitar numbers. Would it have been possible to imagine just how rich and varied a career she would have as a songwriter?

Certainly, there were some people present in the early years who recognised the promise Roberta Joan Anderson had – not least other folk musicians – including Judy Collins, Fairport Convention and Tom Rush – who heard her self-penned songs, including Chelsea Morning, The Circle Game and Both Sides, Now, and knew the value of what they heard. Mitchell’s songwriting talent alone would draw intrigue, and lead to her signing to Reprise for her debut album, Song To A Seagull.

A love for words: setting the bar

It wasn’t a perfect start. The album, produced by The Byrds’ David Crosby, suffered from tape hiss, the poor audio quality underselling Joni’s talent and taking some of the shine off the pearls within. Reprise didn’t realise that the birds on the album cover spelt out the title, Song To A Seagull, and cut the sleeves too small, leaving first pressings reading “Son To A Seagu”.

Still, it didn’t Joni hold back. The beautiful sleeve design – one of the best 60s album covers – would set the bar for all Mitchell’s subsequent records. And if there’s one thing fans should note, it’s the credit she gives on the album to her English teacher: “… dedicated to Mr Kratzmen, who taught me to love words”. Because by 1968, we had barely seen Joni’s love of words.

Lady of the canyon: a flourishing songwriter

With a work ethic like no other, Joni Mitchell managed to find the words for almost an album a year from the late 60s and throughout the 70s, her songwriting flourishing across 1969’s Clouds and 1970’s Ladies Of The Canyon – the latter of which brought about some of Mitchell’s first great songs, including Rainy Night House, Ladies Of The Canyon and Morning Morgantown, as well as Big Yellow Taxi.

Though it may be her best-known song, Big Yellow Taxi wasn’t a huge success, reaching just No.67 on the US Billboard chart and No.11 in the UK; that would remain Joni’s UK peak, while she would improve on the song’s US performance only twice in her career. That’s one of the joys of Joni Mitchell’s music: she may not have written standalone Top 10 pop hits, but put a whole album on, and that’s where she works her magic.

The best example of this is her 1971 album, Blue. Searingly honest and deeply personal, Joni Mitchell unravels her personal life and lays it out succinctly in a mere 36 minutes, with stunningly unexpected sounds created from alternate guitar tunings and unusual piano chords. There’s travel, heartbreak, introspection and longing. As Joni herself sings on the title track, “songs are like tattoos”, and she digs deep into herself for all to see.

Yet it’s the combination of brutal honesty and her ability to turn overwhelming internal monologues into something so beautiful and familiar that is so rewarding for fans, stopping them in their tracks (see The River: “I’m so hard to handle, I’m selfish and I’m sad/Now I gone and lost the best baby that I ever had”). Sugar-coated pop and bombastic rock are all well and good, but if you want blood and guts, Joni Mitchell is your artist.

Some see Blue as Mitchell’s crowning glory. While it is, undoubtedly, an incredible record, it does her a great disservice to curtail such an illustrious songwriting career at 1971 – not least because Joni Mitchell was on to her next project within a year, For The Roses, and would spend the remainder of the decade turning the very notion of songwriting inside out.

A repetitious danger: experiments in jazz

Released in 1974, Court And Spark saw Mitchell take her first year-long break between albums. Earning her a Grammy nomination for Album Of The Year, it also found Joni pursuing a jazz-inflected sound that would heavily inform the rest of her 70s output, particularly 1976’s Hejira.

The latter’s stunning storytelling was accompanied by Jaco Pastorius’ fretless bass on such songs as Amelia, which intertwines the tale of the lost pilot Amelia Earhart with Mitchell’s own experience of solo travel. Again, the struggles of womanhood would inform the epic Song For Sharon, which undulates across eight minutes and sees Joni considering the friction between the pull of marriage and family and the desire for total freedom, as she sings, “Love’s a repetitious danger you’d think I’d be accustomed to.”

1979 saw the release of Mingus. Recorded in collaboration with the jazz bassist Charles Mingus it would be Mitchell’s most experimental record, with contributions from jazz luminaries Wayne Shorter (saxophone), Herbie Hancock (piano) and Tony Williams (drums), alongside a returning Pastorius.

While her sound would shift again throughout the 80s and 90s, Mitchell’s “love of words” remained ever present on songs such as Wild Things Run Fast’s (1982) Chinese Café/Unchained Melody and You Dream Flat Tires – which also features Lionel Richie on backing vocals – as well as a cover of Lieber and Stoller’s (You’re So Square) Baby I Don’t Care, popularised by Elvis. The synth stylings of 1985’s Dog Eat Dog offered further musical developments, while the gentle Chalk Mark In A Rain Storm (1988) featured the soft rock delights of The Tea Leaf Prophecy (Lay Down Your Arms) and The Beat Of Black Wings.

Joni’s 90s releases haven’t received nearly as much attention as they deserve but, entering a new decade, Mitchell continued to delve into her own experiences while also looking outwards, finding topics for songs that, in the hands of other artists, could have been crassly recounted. Take, for example, Sex Kills or The Magdalene Laundries, both from 1994’s Turbulent Indigo: darker songs that reflect on modern-day greed and lust, and historical atrocities, respectively.

By the time of 1998’s Taming The Tiger, Joni Mitchell was 55 years old, with an astounding 15 studio albums behind her. Taming The Tiger has a more mature sound – jazzier, slower –that perfectly complements Mitchell’s voice: a rich and low sound compared to the high, clear-cut vocals of her early folk forays.

While some artists may have little control over their output at the beginning of their career, being instructed on how their albums should sound or look, Joni Mitchell always designed her album covers, wrote all her own songs and played multiple instruments. Taming The Tiger’s sleeve is once a self-portrait, and Joni has credits on the album for vocals, guitar, bass, keyboards, percussion, lyrics, music, art direction, arrangement, mixing and producing. This on top of owning all the publishing rights for her own songs.

Better with age: gravitas and poignancy

By the turn of the new millennium, Joni Mitchell’s sound was once again taking on a slightly new direction. 2000’s Both Sides Now tracks a relationship from its passionate beginnings to its bitter end, as Joni interprets an array of jazz standards, including Stormy Weather, You’re My Thrill and At Last, while also revisiting some of her own early compositions – A Case Of You and Both Sides, Now. Testament to her skill as a songwriter, Both Sides, Now sounds even better sung by an older Mitchell than it did in 1969: age gives it gravitas and poignancy.

It makes sense, then, that 2002’s Travelogue featured orchestral reworkings of songs from across her catalogue. She doesn’t so much as breathe fresh life into them, but rather shows how little they’ve aged and how malleable her songs are.

Her final studio album, Shine, came in 2007 and featured only one re-worked song – Big Yellow Taxi. It made sense, sitting alongside songs dealing with environmental disruption and American politics, as well as songs that took their influences from poetry and theatre – namely If (based on the poem of the same name by Rudyard Kipling) and Night Of The Iguana, named after the play by Tennessee Williams. Once again it displays what Joni Mitchell does best: mixing a wide range of cultural influences with human stories sung against a backdrop of unlikely instrumentation.

At the forefront: influence and legacy

After years of relative quiet, Joni Mitchell has now made her early demos available for fans to hear. It’s fascinating that only now, 52 years since releasing her debut album, she is sharing outtakes and offering a greater glimpse into how her compositions come about, but Archives: Volume 1: The Early Years (1963-1967) proves as carefully curated as any of Joni Mitchell’s studio releases.

Mitchell has been an influence on a number of artists, from contemporaries such as Bob Dylan, The Band, Crosby, Stills, Nash And Young and James Taylor, to Cat Power, Sonic Youth and Hole, via Prince and Björk. Whether you can hear her influence on other artists or not, Mitchell was there, at the forefront, owning all aspects of her music and image, creating albums that were visually and aurally stunning, each one differing from to the next.

For her poetry, for her strange chord choices, for her dogged pursuit of her art, Joni Mitchell remains unmatched.