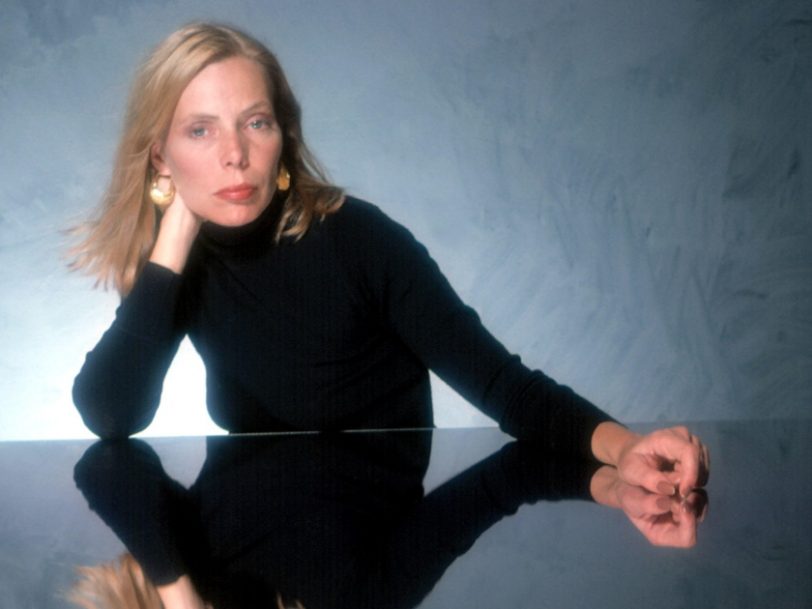 With her ‘Both Sides Now’ album of 2000, Joni Mitchell looked to songbooks of the past in order to demonstrate her interpretative prowess.

Released early in the year 2000, the Both Sides Now album saw Joni Mitchell do something uncharacteristic. After decades of musical innovation and relentless examination of herself and the wider world, she looked back to the past with a record mostly comprised of covers of pop standards from the 30s and 40s.

Still, this being Joni Mitchell, Both Sides Now wasn’t quite as straightforward as the Great American Songbook album that many of her peers (Rod Stewart, Paul McCartney, Bob Dylan) have since made. Firstly, it featured reimaginings of two of the best Joni Mitchell songs – Both Sides, Now itself, originally released on her 1969 album, Clouds, and A Case Of You, first released on 1971’s Blue.

Listen to ‘Both Sides Now’ here.

Secondly, the songs were arranged to form the narrative of a romantic journey, as Mitchell explained to The Los Angeles Times in a February 2000 interview: “It’s the one we’ve all been on. First, you are smitten, which is the first song, You’re My Thrill, which was a Billie Holiday recording. Then you go through facets of pleading and making concessions along the way, then the romantic love goes away, and the album ends with Both Sides, Now, which says you don’t know love at all.”

“It was liberating just to sing someone else’s music”

The idea for the album took hold when Mitchell sang the Lena Horne staple Stormy Weather at a fundraiser concert held in Los Angeles and organised by Eagles’ Don Henley, in 1998. “It was liberating just to sing someone else’s music,” she later recalled. “Plus, I wanted to make an album that represented a romantic journey with [musical ideas] culled from some of the most creative music of the 20th century.”

That performance was followed up by her takes on The Man I Love and Summertime, for Herbie Hancock’s 1998 album, Gershwin’s World, the jazz icon and Mitchell collaborator’s tribute to the US pianist and composer George Gershwin. The following year, while touring with Bob Dylan, Mitchell surprised fans once again by performing the jazz standard Comes Love, most closely identified with Billie Holiday.

In her early years, Mitchell’s mezzo-soprano voice made her one of the best female singers of the era. Over the years, her voice had matured into a smoky croon, lower in tone and more suited to slower material than her densely packed lyrics tended to allow for. The standards she had begun to sing were a perfect match.

Once she’d decided to pursue this avenue for a new album, Mitchell set about choosing the material, a process that her father was keen to be involved with, as she told CBC TV. “Initially, my father wanted participation in selecting repertoire, which was interesting for him because he used to play trumpet in small-town swing bands, and he taught trumpet. But he’s a light-hearted man and, y’know… he would have picked things of a lighter nature…”

Once the songs were selected – with the help of Mitchell’s co-producer, musical director and ex-husband Larry Klein – Mitchell enlisted the arranging talents of Vince Mendoza, who had previously worked with Björk and Rickie Lee Jones. The trio flew to London in the summer of 1999, recording the album at George Martin’s AIR Studios, in Hampstead, with a 90-piece orchestra, many of whom were members of the London Symphony Orchestra. The line-up was rounded out by Herbie Hancock on piano, Peter Erskine on percussion and Chuck Bergohfer on bass. Once completed, the recordings were augmented by horn overdubs from legendary jazz saxophonist Wayne Shorter – another previous Mitchell collaborator – and trumpeter Mark Isham, back in Los Angeles.

“The orchestra get up under your rib cage, they played with such passion”

Mitchell later revealed the effect of the album on her mother, in particular the performances of the orchestra. “My mother went for the saddest ones. But she said after Pop would leave the house, she’d turn it up really loud, you know, like that’s the way to listen to this record, like concert loud because then the strings can be effective. You can feel the vibration of them. They get up under your rib cage, and the orchestra played with such passion. They weren’t just hired guns. They really got emotionally involved and, at a louder volume, that’s perceptible.”

Released on 8 February 2000, Both Sides Now remains a triumph, whatever volume it’s played at. You’re My Thrill has all the swooning devotion of the early stages of a relationship, complete with flirtatious embellishments from the strings. From there, things move quickly – Mitchell’s reading of Etta James’ At Last introduces a hint of self-doubt missing from the original; similarly, her studio recording of Comes Love has a fatalistic tone, set to a smoky jazz-club backdrop with mischievous trumpet from Isham.

Doubts over the relationship set in with the deliciously desolate-sounding pairing of You’ve Changed and Answer Me, My Love, before Mitchell’s own A Case Of You makes apparent the intoxicating effects of troubled love. In stark contrast to the purity of her original vocal on Blue, here Mitchell’s voice is weathered, frayed with age and experience.

“That was like surfing the big one. What a thrill for all of us”

The narrative arc then becomes complicated. Mitchell’s take on Don’t Go To Strangers sees her pleading one minute, then willing to set her lover free the next, over slow-moving, lush and dramatic orchestral swells. Meanwhile, Sometimes I’m Happy is the jauntiest thing on the album – the music a light-stepping, brassy strut which contrasts nicely with the lyrics, which deal with uncertainty and dependency, and are sung with real sass.

Still, the relationship is on its way out, and Mitchell’s delivery of Don’t Worry About Me is a master class, sung like somebody putting on a brave face while unravelling inside. By the following song, Stormy Weather, that front has fallen away as Mitchell sees “gloom and misery everywhere”. I Wish I Were In Love Again then finds her having fun with a witty lyric that weighs up the pros and cons of romantic entanglement, deciding the negatives come out on top… yet yearning for the whole ride again.

The closing Both Sides, Now gives the album its emotional pay-off. When Mitchell wrote the song, she was in her early 20s, and its reflective look at love seemed speculative and precocious. Singing it over three decades later, Mitchell inhabits every line, bringing a hard-won wisdom to the lyrics while delivering one of the performances of her career. She later wrote about the recording session in the sleevenotes to her 2014 anthology, Love Has Many Faces: “At the end of that performance, many members of the Orchestra had their hankies out. That take was like surfing the big one. What a thrill for all of us.”

As the strings come to rest, bringing Both Sides Now to a close, the thrill is ours, too.