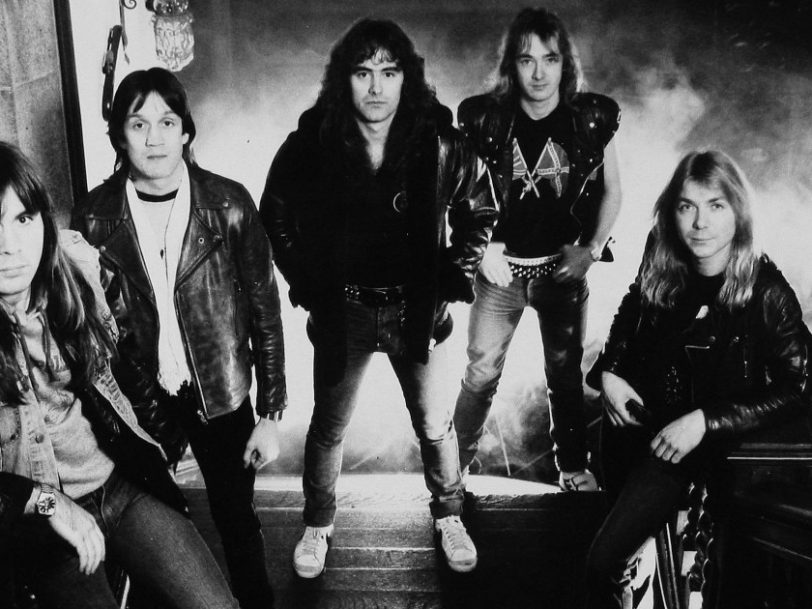 Iron Maiden: Why This Beast Of A Band Remain Metal’s Most Enduring Act

Heavy metal titans Iron Maiden secured their legacy long ago, but these tireless troopers are still pushing ahead to the future.

Black Sabbath are arguably heavy metal’s founders, and Metallica the genre’s mainstream global ambassadors, but in terms of influence and longevity, Iron Maiden are probably the most important act of them all. They’ve sold upwards of 100 million albums, their fans are among the most loyal in the world and they continue to influence musicians of all persuasions – and not just those from the metal fraternity.

Listen to the best of Iron Maiden here.

“Iron Maiden fans live and breathe and die for them”

“The devotion of the fans moving in unison, pumping their first watching the show… when I see that, I see the paradigm for my future and the relationship I want to have with my fans,” Lady Gaga told Rolling Stone in 2021, describing her experience at an Iron Maiden concert. “Their fans live and breathe and die for Maiden, and [to have] that is my dream.”

It’s astonishing to consider just how deeply Iron Maiden have burrowed into the wider public consciousness. Naturally, they’ve been honoured time and again by metal-inclined publications such as Kerrang! and Classic Rock, but they’ve also won everything from Grammy Awards to Ivor Novellos and, in 2012, their landmark third album, The Number Of The Beast, was voted best British album of the last 60 years in a poll relating to Queen Elizabeth II’s Diamond Jubilee.

Celebrities ranging from Paris Hilton to David Beckham and Justin Bieber have been seen sporting Iron Maiden T-shirts, and the band have even made their presence felt in the Vatican, too. Their rampaging 1983 hit The Trooper became the first metal song ever to be aired in the holy city during Rony Roller Circus’ exclusive performance for Pope Francis in January 2021.

“Everything made me a fan,” Slipknot and Stone Sour frontman Corey Taylor told MTV in 2006. “Steve Harris does more with four fingers than I’ve ever seen anybody do. And Bruce Dickinson? Dude! To me, he was the quintessential old-school heavy metal singer. He could hit notes that were just sick, and he’s a great showman… And there wasn’t a dude that I hung out with that wasn’t trying to draw Eddie on their schoolbooks.”

Much copied but never bettered, Maiden’s iconic mascot, Eddie, was created by the group’s longtime designer Derek Riggs, and has appeared on every Iron Maiden album cover, in guises ranging from street-punk to part-cyborg assassin and Egyptian god. The zombie-like figure was based on a papier-mâché mask that appeared in the group’s early stage show, and Eddie has since been a regular feature of the group’s set design, whether wandering on stage to mime playing guitar, appearing as an oversized animatronic puppet or being put to (un)death by electric chair.

“We looked to Iron Maiden, because they did it best”

Iron Maiden’s old-school approach to their craft has been the cornerstone of their success. Formed by bassist and primary songsmith Steve Harris in 1975, they paid their dues playing countless pubs in London’s East End, before emerging as frontrunners of the New Wave Of British Heavy Metal: a grass-roots movement of home-grown hard-rock acts who adopted punk’s DIY ethic of self-promotion and self-releasing singles during the late 70s.

First coined by Sounds journalist Geoff Barton, the movement (usually referred to by the acronym NWOBHM) afforded Iron Maiden and contemporaries such as Def Leppard crucial early exposure, and led to the London quintet signing a major deal with EMI Records late in 1979.

Though a dyed-in-the-wool hard-rock act, Iron Maiden’s reputation-building early albums, including their self-titled debut, from April 1980, and the following year’s Killers, also found favour with the punks. Their raw, adrenalised brand of rock and original vocalist Paul Di’Anno’s raspy vocals gave Maiden an edge over their contemporaries, while the group’s refusal to compromise their creative vision also impressed their nascent fan base.

Drawing up the template for their future catalogue, those early Maiden releases featured everything from crunching, punk-enhanced rockers such as Prowler, Charlotte The Harlot and Wrathchild through to complex, progressive-rock-style epics such as Phantom Of The Opera. Both their attitude and their music’s depth and power soon left a mark on the next generation of heavy metal musicians.

“I don’t think Metallica would be where Metallica is today if it wasn’t for Iron Maiden,” drummer Lars Ulrich told Music Radar in 2011. “Not only for paving the way but also for inspiring me in 1981 to form a band.”

“I fucking lived and breathed Iron Maiden,” Anthrax guitarist Scott Ian wrote of his younger days, in his autobiography, I’m The Man: The Story Of That Guy From Anthrax. “That’s what I wanted to be from 1980 to 1985. Whatever we did, we looked to Iron Maiden because they did it best.”

“The show was so over the top, it set a standard”

Maiden were nigh-on unstoppable during the 80s – a decade in which they released many of their legend-enshrining titles. Their early records laid the bedrock, but they took it to another level altogether after they recruited vocalist Bruce Dickinson for their major commercial breakthrough, 1982’s UK chart-topping The Number Of The Beast.

Described by Slayer’s Kerry King as “the singer that made them metal royalty”, the talismanic Dickinson remains one of metal’s greatest ever vocalists. After drummer Nicko McBrain came on board, in 1983, Iron Maiden cut a string of classic albums – Piece Of Mind, Powerslave, Somewhere In Time and Seventh Son Of A Seventh Son – all of which rate among the genre’s most ambitious and influential titles.

Iron Maiden didn’t just excel in the studio during the 80s. They set the benchmark as a live act, too, setting out on monster concert tours which led them to slaying arenas and stadiums the world over. The shortest of their tours between 1980 and 1990 was in support of Seventh Son Of A Seventh Son – and even that jaunt took in over 100 dates.

“Their album, Live After Death, had – and still has – a great impact on me when it comes to work ethic,” Tobias Forge, singer with lauded Swedish metal act Ghost, said in an interview with Blabbermouth in 2021.

“Going through that book that came with the record, watching all those dates. When I was a kid, I would sit there with a map book and pin out all the cities they played on that tour. It was like a hundred shows all over America. The show was so over the top, so it set a standard.”

“No Maiden, no Big Four”

Despite the emergence of younger and faster metal progenies, such as “The Big Four” of thrash, Metallica, Megadeth, Slayer and Anthrax, Iron Maiden’s mighty catalogue and marathon live shows kept them at metal’s top table well into the 90s. In fact, the band continued to chalk up new milestones. 1990’s No Prayer For The Dying included Maiden’s only UK chart-topping single to date in Bring Your Daughter… To The Slaughter, while 1992’s Fear Of The Dark album when straight in at No.1 at a time when grunge and newer alternative rock styles were largely outstripping metal in the marketplace.

The band experienced the most turbulent period of their career during the latter half of the 90s. Temporarily, as it turned out, Bruce Dickinson quit Iron Maiden after Fear Of The Dark, and the band recorded two albums with Wolfsbane frontman Blaze Bayley, The X Factor and Virtual XI, which polarised opinion. However, since Dickinson reassumed the mantle in time for 2000’s widely-acclaimed Brave New World, Iron Maiden become a global force to be reckoned with all over again.

Yet, what really sets Maiden apart, is that they’ve no need to trade on past glories. The strength of their legend-shaping catalogue speaks for itself, but they’ve released a further series of formidable titles this side of the new millennium, with 2010’s The Final Frontier and 2015’s The Book Of Souls both going to No.1 in the UK. Such is the thirst for the band’s new material that they even performed much of The Book Of Souls on the record’s supporting tour of arenas at a time when most of their contemporaries need to rely on greatest-hits sets just to survive.

More recently, just months after its September 2021 release, Senjutsu, went silver in the UK and rewarded Iron Maiden with their biggest US hit, peaking at No.3 on the Billboard 200. Indeed, while this seemingly invincible British institution is still alive and kicking, it seems that heavy metal’s future is still in very safe hands.

“They elevated heavy metal to an art form”

“Iron Maiden made every band that were influenced by them aspire to be like them,” Anthrax’s Charlie Benante wrote in a Facebook post in 2021. “Maiden had something different, they brought out that Primal roar from us. Theirs was a new style of hard rock and metal. They changed the game. I often say, ‘No MAIDEN, no Big 4.’”

“They redefined the whole genre through blending a classic heavy rock influence with a punky vibe, twin guitar attack and a progressive approach,” biographer Neil Daniels wrote in The Unauthorized History Of The Beast. “They elevated metal to an art form, proving that academic and musical inspirations can coexist. Iron Maiden’s influence on generations of rock and metal bands simply cannot be overstated.”

Want to play with madness? Check out our best Iron Maiden songs.