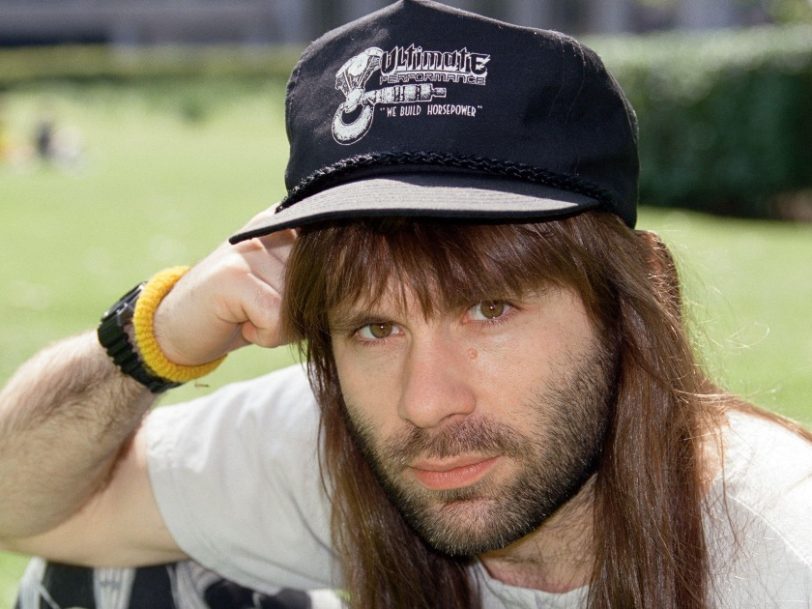 ‘Fear Of The Dark’: How Iron Maiden Lit A New Path For The 90s

Challenged by grunge and other changing trends, Iron Maiden responded with an aggressive ninth album, ‘Fear Of The Dark’.

First issued in May 1992, Iron Maiden’s ninth album, Fear Of The Dark, represented the end of an era for the band. It became long-time producer Martin Birch’s last hurrah prior to his retirement, and – perhaps more significantly – it proved to be the last Maiden album to feature vocalist Bruce Dickinson until he returned to the fold for 2000’s Brave New World.

The changes didn’t end there, either, as the metal titans even reassessed the way they presented their work in the visual sense. To the surprise of many, a design by original Maiden sleeve artist Derek Riggs was passed over for a work by newcomer Melvyn Grant. Now highly regarded as one of the best Iron Maiden album covers, Grant’s striking Fear Of The Dark artwork depicted the band’s iconic mascot, Eddie, transformed into what biographer Mick Wall referred to as “some sort of Nosferatu tree figure leering at the moon”.

Listen to ‘Fear Of The Dark’ here.

“We wanted to upgrade Eddie for the 90s,” Iron Maiden’s manager, Rod Smallwood, revealed in Wall’s book Run To The Hills: Iron Maiden – The Authorised Biography. “We wanted to take him from the sort of comic-book horror creature and turn him into something a bit more straightforward so that he became even more threatening.”

“When it comes to playing, we’re still out there fighting”

Smallwood was acutely aware that his charges also needed a similar sonic “upgrade” in the 90s – a decade in which alternative rock would hold sway and metal’s old guard were required to adapt to survive. Indeed, when Fear Of The Dark was released, on 11 May 1992, Nirvana’s Nevermind was the world’s biggest-selling album, and grunge was completely reshaping the rock landscape – a development greeted with mixed feelings by Iron Maiden.

Highlighting Soundgarden as his favourite of grunge’s hometown heroes, Bruce Dickinson told Kerrang!, “Some of the Seattle stuff is good, some of it is bollocks. It’s actually what the English bands should be doing, because all [the US bands have] done is nicked from Black Sabbath and recycled English rock.”

Nonetheless, Iron Maiden had made a point of paring back their sound on their previous album, 1990’s No Prayer For The Dying. That record came shorn of the synthesisers and complex song arrangements that had been such a feature of late-80s Maiden outings such as Somewhere In Time and Seventh Son Of A Seventh Son, and Fear Of The Dark broadly pursued a similar agenda. As the hardboiled likes of Weekend Warrior, the heavy, frenetic Be Quick Or Be Dead and the album’s barnstorming title track quickly revealed, raw, aggressive hard rock was once again Maiden’s primary currency.

“It really sums up what Maiden is all about”

“I can still remember the moment when we recorded the song Fear Of The Dark,” guitarist Dave Murray told Louder in 2015. “We knew right away that it was going to be a standout live track. Everything about it – the power, the melodies, the lyrics, the pacing of the song and the way it changes – it really sums up what Maiden is all about. The way the fans sing it when we’re playing live, it really has become an anthem for us.”

Elsewhere, though, tracks such as the cinematic Childhood’s End and the power ballad Wasting Love proved that Maiden were as committed as ever to making sonic advances. Then there was Fear Of The Dark’s centrepiece, Afraid To Shoot Strangers: a 24-carat epic, it matched Steve Harris’ poignantly-observed anti-war narrative, written from the point of view of a solider involved in the first Gulf War (“Trying to visualise the horrors that will lay ahead/The desert sand mound a burial ground”), with a suitably dramatic sonic backdrop involving sweeping orchestral arrangements and some breathtakingly complex guitar licks.

Much of the media agreed that, with Fear Of The Dark, Iron Maiden had successfully recalibrated for the 90s, with Billboard’s especially enthusiastic review suggesting Bruce Dickinson’s commanding vocals “show no signs of wear and tear”, and praising Murray and his guitar foil Janick Gers for their “fresh and crisp” interplay.

This positivity soon translated into sales, with the album’s visceral lead single, Be Quick Or Be Dead, peaking at No.2 in the UK and its smouldering, bluesy follow-up, From Here To Eternity, also cracking the Top 30. Fear Of The Dark itself put up an impressive showing on the album chart, rewarding Maiden with their third No.1 in the UK, in addition to climbing into the US Top 20, where it would eventually move almost half a million copies.

“I don’t think we worry about what’s in vogue”

As fate would have it, the album’s release presaged an unexpected change of direction for Iron Maiden, when ex-Wolsfbane vocalist Blaze Bayley replaced the talismanic Bruce Dickinson in 1993. However, divorced from these turbulent times, Fear Of The Dark still stands on its own merits.

“A lot of people have talked about how varied this new album is, but we’ve always had songs on our records that weren’t typical,” Steve Harris told Raw magazine at the time of Fear Of The Dark’s release. “Even as far back as our first album there’s been songs like Remember Tomorrow and Strange World, which haven’t been out and out metal. I don’t think we worry about what’s in vogue or what people think of us.”

“When it comes to playing, we’re still out there fighting,” Dave Murray added. “It’s in our blood, that feeling of adrenaline.”

Find out which ‘Fear Of The Dark’ track shines among our best Iron Maiden songs.