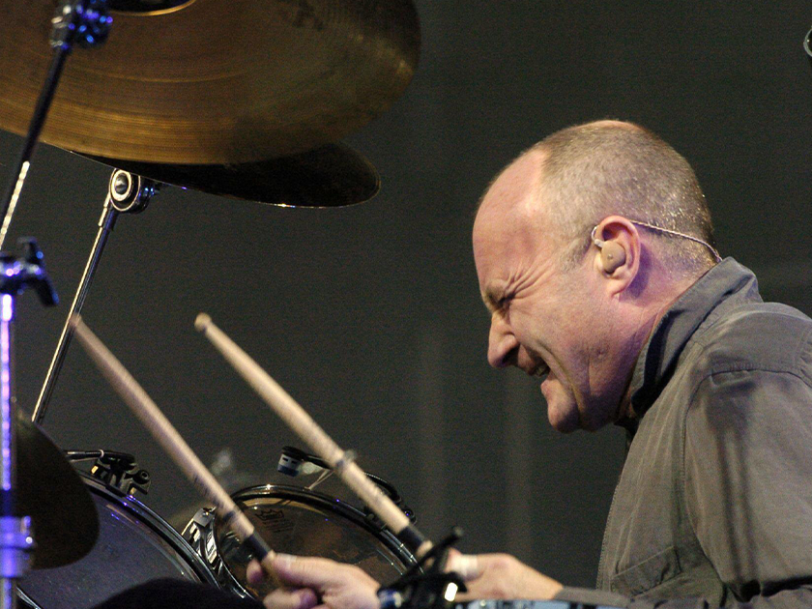 In The Air Tonight: How Phil Collins Created His Thunderous Solo Song

Featuring a historic drum fill that triggered an earthquake in pop music, Phil Collins’ iconic debut solo single, In The Air Tonight, has not only come to be regarded as one of the singer’s most career-defining songs, but it also helped spark a seismic shift in music production. By popularising a new sonic approach to rock drumming, the frontman for prog-rock legends Genesis stormed ahead into his solo career in 1981 and single-handedly reinvigorated the sound of the 80s. Here is the story of how In The Air Tonight achieved legendary status among fans and musicians alike, and why it continues to have such a lasting influence.

Listen to the best of Phil Collins here.

Having been promoted from drummer to lead singer in Genesis since the departure of their original frontman, Peter Gabriel, Phil Collins had well and truly found his voice by the late 70s. With his bandmates Tony Banks and Mike Rutherford branching out into solo work, Collins began to consider embarking on a project of his own.

The seeds of his sonic volte-face – the soon-to-be iconic gated reverb drum effect – were planted after Collins participated in recording sessions for Peter Gabriel’s self-titled 1978 album with producer Hugh Padgham. “The whole sound really was discovered when Phil was in playing drums on a song called Intruder,” Padgham later explained. “Phil was a guest player on the album and he was mucking around with a drum sound.”

This new sonic discovery – seemingly stumbled upon by accident due to a quirk in Padgham’s SSL console – inspired Collins to lay down some demos at home. “If you don’t know the rules,” the musician wrote in his memoir, Not Dead Yet, “you don’t know what rules you’re breaking.” Capturing material that was largely informed by the personal turmoil he was going through following the breakdown of his marriage to Andrea Bertorelli, Collins began tinkering around with a CR78 drum machine, aided by ethereal Prophet-5 synth backing.

The recording: “I was just fooling around. I got these chords that I liked, so I turned the mic on and started singing”

Turning his master bedroom into a makeshift studio, Collins demoed In The Air Tonight at some point in 1980, eschewing the prog-based complexity of Genesis in favour of a simple three-chord structure and a decidedly minimalist arrangement. “I was just fooling around,” Collins later explained. “I got these chords that I liked, so I turned the mic on and started singing.” With only a lo-fi drum pattern to guide his vocal, Collins described the song as being “99.9 percent sung spontaneously, the words dreamt up from out of nowhere.” However, the trauma of Collins’ divorce seemed to be creeping into his psychology – in 2016, the singer noted that In The Air Tonight contained “a lot of anger, a lot of despair and a lot of frustration”.

As the time came to record his debut solo album, Face Value, at Townhouse Studios – again with producer Hugh Padgham – Collins was keen to embrace the gated reverb drum effect they’d discovered. Despite being so sparsely-arranged, imbued as it is with a hypnotic and slow-burning atmosphere, In The Air Tonight’s memorable vocal hook (“I can feel it coming in the air tonight”) proves indelibly captivating for the song’s three and a half minutes, building a weight of unbearable anticipation before its earth-shattering drum break.

It was in this moment that Collins well and truly thundered into the 80s, introducing the world to the new drum sound that he and Padgham had pioneered. Loud and echo-laden, the drum fills Collins launches into see him channel his marital woes into an era-defining classic, heavy with deep-seated emotion and gravitas. “Anger, bitterness, hurt. All that stuff is in In The Air Tonight,” Collins said on the Face Value episode of the British TV documentary series Classic Albums, “and then finally losing your temper at the end when the drums come in.”

The inspiration: “The lyrics you hear for In The Air Tonight, I just sang. I opened my mouth and they came out”

There has been much speculation as to what In The Air Tonight is actually about. With its dark and haunting lyrics (“If you told me you were drowning/I would not lend a hand”), countless urban legends have sprung up claiming that the song was inspired by an incident in which Collins witnessed a man drowning, but did nothing to save him (even rapper Eminem has been guilty of spreading this myth, in his famous hit Stan). Astoundingly, however, the truth behind the song is far more mysterious.

“The lyrics you hear for In The Air Tonight, I just sang,” Collins revealed. “I opened my mouth and they came out.” The singer has refused to give credence to any conspiracy theory – such as one where he invited the drowning man’s murderer to a concert and then singled him out in the crowd – instead claiming the song’s lyrics are just an abstract expression of his rage following his split from his wife. “The verses have a bit of a storyline,” Collins admitted, “but there’s no link necessarily between them and the anger.”

Nevertheless, the sheer power of the words on In The Air Tonight – particularly when matched with its suspenseful synthscapes and doom-filled drum fills – are hugely evocative, so it’s hardly surprising that the song has led people’s minds to run wild. Not only were its lyrics a masterclass in cryptic storytelling, but, by pioneering and popularising a unique approach to producing drum effects, In The Air Tonight set the sonic standard for many of the best 80s songs.

The influence: “This song has become a stone around my neck, though I do love it”

Released on 9 January 1981 as Phil Collins’ debut solo single, In The Air Tonight peaked at No.2 in UK and No.19 in the US, selling over three million copies stateside and eventually being certified gold by the Recording Industry Association Of America. Its iconic music video, directed by Stuart Orme, received heavy airplay on MTV, featuring Collins singing to camera in a dark room while ghostly figures lurk outside his window, as well as showing him walking down a corridor full of strange doors.

Rapidly becoming one of the best Phil Collins songs, In The Air Tonight continues to fill the singer with justifiable pride. “This song has become a stone around my neck,” he told Rolling Stone magazine in 2016, “though I do love it.” Clearly, Collins’ musical contemporaries were similarly enamoured with the track, as the innovation of its gated reverb drum effect went on to dominate the sound of 80s pop-rock, influencing the likes of Kate Bush, David Bowie and New Order. The song even infiltrated the 90s hip-hop scene, most notably when it was sampled by DMX on his 1998 song I Can Feel It.

In this respect, In The Air Tonight has stood the test of time as a seminal pop classic, its game-changing approach to production setting the blueprint for countless artists to follow, while laying the sonic foundation stone for the 80s’ distinctive sonic signature. Just as Genesis had blazed a trail of their own in the 70s, from the moment Collins went solo and hurled himself into that iconic drum break, In The Air Tonight breathed new life into rock drumming, whipping up a storm for the new decade.