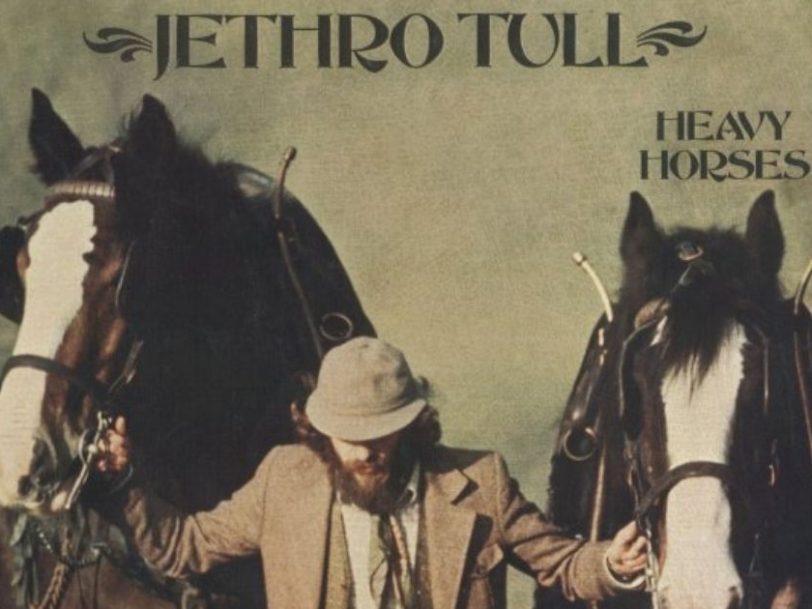 Having leapt gracefully into new pastures with their 1977 album, Songs From The Wood, Jethro Tull had successfully cross-bred their prog-rock sensibilities with a folk-rock sound inspired by the myths and fairy tales of medieval England. It was, however, time for another change. After moving to a 15,000-acre estate on the idyllic Isle Of Skye, in Scotland, with his new wife, songwriter Ian Anderson quickly fell in love with the Hebrides and began styling himself as a country squire as he began work on his band’s 11th album, Heavy Horses.

Withdrawing from the urban trappings of modern life, Anderson began to channel his fondness for the countryside into new songs that had a more down-to-earth feel, expressing his affection for the horses that roamed the land, as well as a wistful reverence for nature. Dedicated to the “indigenous working ponies and horses of Great Britain”, it was clear Heavy Horses would be a completely different beast from what had come before.

With recording underway at Maison Rouge Studio, in London, in the latter half of 1977, Heavy Horses looked set to keep pace with the same folk-rock gallop of Songs Of The Wood but jettisoned that album’s Elizabethan-era whimsy in favour of a nostalgia of a very different hue. Conscious of how the Industrial Age had spelt the end of a rural way of life, Anderson’s new songs were poetic musings on a bygone era of rustic living. Having proven himself as a keen social commentator on Aqualung and Thick As A Brick, Heavy Horses saw him use animal metaphors to draw analogies with how people live their lives today. “It’s unashamedly about something that was lamenting the passing of an age,” Anderson said of the album.

Heavy Horses’ sole single was Moths, released in March 1978 and fluttering with anthropomorphic imagery and lovelorn lyrics that recall the Romantic poet John Clare (“We soared on powdered wings/Circling our tomorrows/In the wary month of spring”). Dark yet winsome, it touches on the suicidal impulses of moths – and even lemmings – to explore the doomed desires of star-crossed lovers.

Bolting out of the gate the following month, on 10 April 1978 in the US (and following on 21 April in the UK), Heavy Horses was misunderstood upon first release. The album had the misfortune to surface during a period when the music press was in thrall to punk rock. For Jethro Tull fans, however, it contained worthy contenders for a spot among the best Jethro Tull songs, helped along by some of Ian Anderson’s most creative lyrics to date, imbued as they were with the spirit of pastoral poetry packaged as filly-friendly folk-rock.

As deliriously eccentric as ever, the songs on Heavy Horses are dynamic and sprightly, mixing prog flute with mandolin and acoustic guitars. Reining in their penchant for penning longer compositions, Jethro Tull favour shorter bursts of folk-inspired jauntiness, bringing life to Anderson’s gleefully idiosyncratic lyrical concerns. Tapping into a longstanding literary tradition of beast poetry, the album’s eccentric opening track, … And the Mouse Police Never Sleeps, celebrated what Anderson described as “the hunting instincts of cats” while acknowledging the predatory nature of humanity itself.

The menagerie of animal metaphors continue: Rover tackles male infidelity, dryly comparing the relationship of a husband and wife to that of a dog and its master, while One Brown Mouse twitches its whiskers in its cage as the song’s narrator ponders who is most free (“Which one of us exercises on the old treadmill/Who hides his head, pretending to sleep?”). Dabbling in the same intensity as Jethro Tull’s early work, Journeyman is a flouncing rocker reportedly written by Anderson during a train ride from London’s Marylebone Station. Given how industrialisation led to steam trains invading the English countryside, the song appears to be a dystopic critique of the machine age akin to Charles Dickens’ short story The Signal-Man (“Howling into hollow darkness/Dusky diesel shudders in full cry”).

Heavy Horses’ title track, an eight-minute rustic rocker, seemingly builds on this thought-provoking theme, lamenting how the working horses of the past have been put out to pasture by machinery brought about by the Industrial Revolution (“Now you’re down to the few and there’s no work to do, the tractor’s on its way”). Combining his new-found love of farming with his wry observations of social decline, Anderson reflects upon what we’ve lost as opposed to what we’ve gained. “I’m trying to make the more obvious comparison with today’s world where we talk in terms of horsepower,” he told Classic Rock magazine.

“‘Heavy Horses’ is a logical successor to ‘Songs From The Wood’”

The album is not all finger-wagging and podium-thumping, however. The baroque’n’roll strut of Acres Wild is one of Heavy Horses’ highlights – a joyful ode to Anderson’s home north of the border. “The chorus invites you to ‘Come with me to The Winged Isle’, which is the Isle Of Skye,” the singer wrote in the liner notes to Heavy Horses’ 40th-anniversary reissue, “and it was written in the context of the wilds (think wilderness) of that area of Scotland.” Jaunty and upbeat, the violin solo from Darryl Way is undoubtedly one of his finest performances.

Though punk and new wave raged on both sides of the Atlantic, Heavy Horses still reached No.19 on the Billboard 200, selling over 500,000 copies in North America alone. This led Jethro Tull to mount yet another successful US tour, which culminated in them making history in October 1978 by playing the first-ever transatlantic satellite broadcast from Madison Square Garden, in New York City. Despite Heavy Horses’ yearning for the past, clearly the band were not afraid of embracing technological innovation if it meant spreading their nature-worshipping cause.

Today, Heavy Horses is a cult favourite among fans, and a worthy follow-up to Songs From The Wood. Certainly, Ian Anderson feels both albums grew from the same seeds. “In my mind, Heavy Horses is a logical successor,” he later said. “Not quite part two, but it follows on with that slightly more rural context of its predecessor for a lot of the songs.” Proving why Jethro Tull were such a refreshingly offbeat presence on the prog-rock circuit, Heavy Horses has aged like a reliable stallion in the band’s discography. There’s no better time to bring it out to stretch its legs.