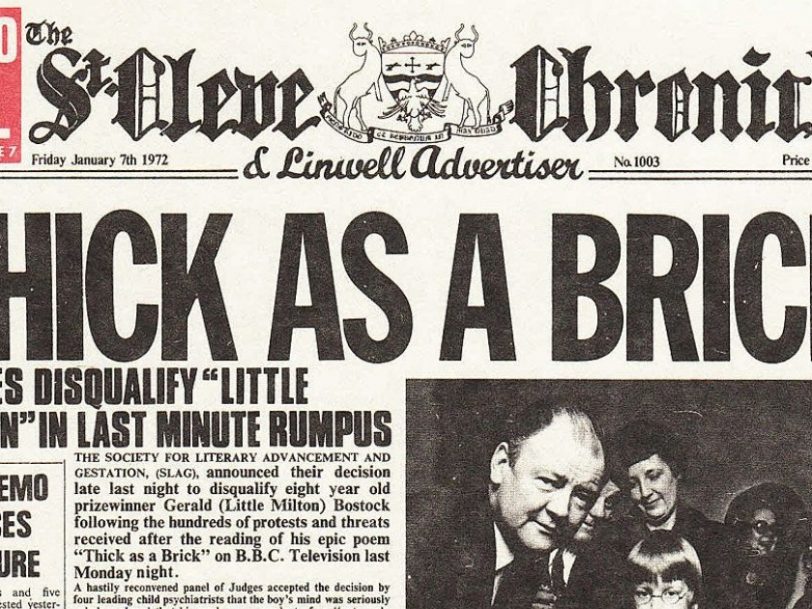 ‘Thick As A Brick’: Behind Jethro Tull’s Towering Satirical Masterpiece

Inspired by the surreal humour of Monty Python, Jethro Tull’s ‘Thick As A Brick’ album lampooned British life and the excesses of prog rock.

Following the storming success of his band’s 1971 opus, Aqualung, Jethro Tull’s frontman, Ian Anderson, found himself both tickled and bemused by the sheer absurdity of progressive rock. Mindful of the pretentious pitfalls of a genre that could be grandiose, lengthy and indulgent, Anderson was keen to inject more of a sense of humour into proceedings for the group’s next album, Thick As A Brick.

Listen to ‘Thick As A Brick’ here.

Though they were prog-rock bedfellows, Jethro Tull approached their fifth record with a tongue-in-cheek sensibility, framing it as a musically ambitious satire on the British class system, with comedic undertones. “We’re talking about an era when Monty Python was really successful,” Anderson later said, “and we had a similar sense of humour to them.” Coasting away from the Flying Circus in a blimp of their own making, Jethro Tull ensured that Thick As A Brick was a surreal and epic flight that celebrated their fondness for schoolboy japes while leading them to discover their very own holy grail.

“We were spoofing the idea of a concept album”

Combining highfalutin musical ideas while rehearsing in a mobile studio owned by The Rolling Stones, the band put flesh on the bones of a two-part suite of continuous music – each one occupying over 20 minutes on each side of vinyl. Aiming to tell the story of a fictitious 12-year-old schoolboy, Thick As A Brick was full of the dazzling wordplay, riddles and frantic tempos of the best Jethro Tull songs, bolstered by gleeful anti-Establishment swipes at toffee-nosed bores. “We were spoofing the idea of a concept album,” Anderson said, “but in a fun way that didn’t totally mock it.”

Committing to prog’s tried-and-tested formula of gleefully long compositions and complex time signatures, the band finalised the record in December 1971 at Morgan Studios, in North London, and each musician fully bought into Anderson’s comical vision. “I came up with the idea of basing the whole thing around a fictitious schoolboy called Gerald Bostock (who was also known as Little Milton) and a poem he’d supposedly written,” the singer explained. This concept allowed Anderson to toy with what he called “the era of surreal British humour” they group had grown up with, mining the absurd irreverence of Spike Milligan’s Goon Show and the sketch-based lunacy of Monty Python’s class-based iconoclasm.

“I think we all had that sort of schoolboy humour throughout the album,” guitarist Martin Barre recalled. “We were all pranksters, all in a very silly state of adult development.” Musically, however, Jethro Tull were as serious-minded as ever, creating for Thick As A Brick a watertight arrangement to which each band member contributed hugely, resulting in the band’s most innovative undertaking to date. “We worked together on the arrangements and so everyone probably had an equal amount of input,” Anderson said.

“There’s a definite strain of English tomfoolery running throughout”

Released on 10 March 1972, Thick As A Brick landed with an album cover that spoofed the inanity of local-newspaper reportage. Arguably just as ambitious as the music within, the “newspaper” was named The St Cleve Chronicle & Linwell Advertiser. The band had gone to painstaking lengths to craft a 16-page editorial containing fictional articles, crossword puzzles and daft tabloid tidbits that satirised modern journalism.

“The fun of developing the album cover contributed to making Thick As A Brick a unified piece of work,” bassist Jeffrey Hammond recalled. Far-reaching in scope, the artistic presentation behind the album was all part of Jethro Tull’s plan to lampoon Britain’s deep-seated “stiff upper lip” culture. “There’s a definite strain of English tomfoolery running throughout,” Anderson observed.

Through the character of Gerald Bostock, Anderson delivers lyrics exploring the journey from puberty to manhood, with the music’s freewheeling chaos mirroring the rebelliousness of a child running amok in a world of military conscription. By playfully drawing comic-book analogies to political buffoonery (“We’ll have Superman for president/Let Robin save the day”), Thick As A Brick succeeded in taking humorous swipes at social, political and religious mores.

“I’m not sure our American fans understood the humour”

Upon its release, the album peaked at No.5 in the UK and even hit the No.1 spot in the US. “I must admit to being a little surprised that we got to the top of the charts over there,” Anderson would later say, no doubt because of how quintessentially British Thick As A Brick was. Building on the social critiques they group had explored on Aqualung, Thick As A Brick was not only a fun parody of the excesses of prog, but it also offered a state-of-the-nation address that combined the moral invective of Charles Dickens with the whimsy of Tom Brown’s School Days. “We all saw the silly side,” Anderson said. “We were like John Cleese in a bowler hat lampooning the bureaucrats, while revelling in it.”

When it came to touring an album of such complexity, the band were nervous. “We were petrified about performing the thing live,” guitarist Martin Barre said. “It was quite hard to play and a lot to remember, lots of odd bars and 7/4s and 6/8s, a vast amount of stuff.” With John Evan going berserk on the keyboards and Barriemore Barlow’s unhinged drum solos – not to mention David Palmer’s bonkers string arrangements – it’s easy to see why adapting Thick As A Brick to the stage was a considerable challenge. For Anderson, however, the culture gap between the UK and the US was more of a problem. “I’m not sure our American fans understood the humour behind our live performance,” he said.

Keenly aware that the concept behind Thick As A Brick was giddy with theatrical possibilities, there was always a risk that the message would fly over many people’s heads. “We decided to bring all the characters mentioned on the album and in the cover newspaper to life,” Anderson recalled, “and it was quirky, very British. We weren’t trying to be comedians, just to enhance the concept.” As it happened, the tour was a rip-roaring success, further showcasing Jethro Tull’s burgeoning reputation for flamboyant stage antics and outrageous showmanship.

“We set out to make the mother of all concept records”

Despite the abundance of Python-esque humour and convoluted musical breakdowns, Thick As A Brick went gold in the US, where it sold in excess of 500,000 copies. To this day, it is consistently named as one of the best progressive rock albums of all time – not bad for a record that was intended as a well-intentioned satire on the bloated purveyors of prog rock. “We set out to make the mother of all concept records,” Anderson said, admitting that Thick As A Brick straddles a fine line between sincerity and spoofery. “For me, that’s [the] beauty of true prog rock – it must have both,” he added.

Though the concept is, of course, its prized asset, Thick As A Brick is a true musical tour de force. “There are so many innovations on the album,” Anderson has said, remarking how amazed he is that he was only 24 years old when it was recorded. As for the fictional Gerald Bostock, much of his experiences were based on Ian Anderson’s own upbringing. “There’s an autobiographical element in what I wrote,” the singer admitted. “As a child, I was a bit of a rebel.” It’s this rebellious streak that helped Thick As A Brick tower above its peers, fully deserving of its status as one of the best Jethro Tull albums.