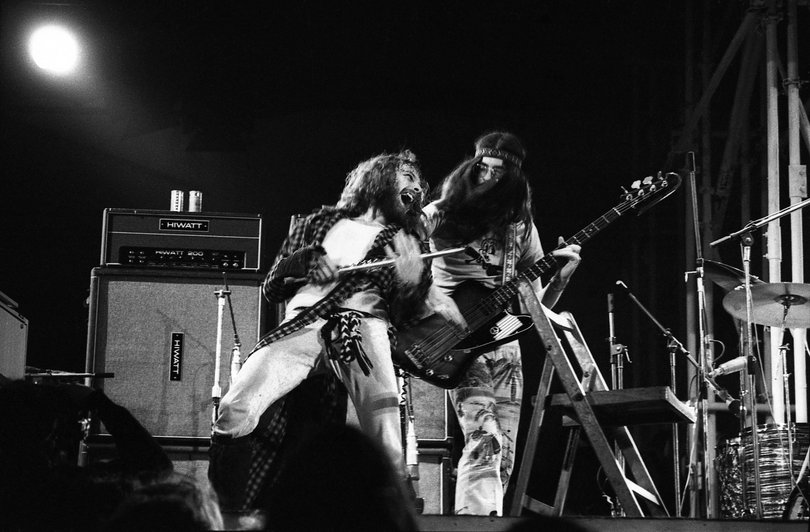 From folky freakouts to feats of sonic daring, the best Jethro Tull songs crowned the group the court jesters of the prog rock scene.

Across the years, the British progressive-rock icons Jethro Tull achieved wonders through mixing folk, rock, jazz fusion, classical, blues and world music. Selling over 60 million albums worldwide – largely thanks to classic records such as Aqualung and Thick As A Brick – the group also became a formidable live unit, with their Pied Piper-esque frontman, Ian Anderson, tearing up the stage with flamboyant flute solos. Master storytellers who could regale fans with Dickensian depictions of English life, and consummate musicians who made a sport of toying with unusual time signatures, Jethro Tull mined English mythology to unearth nuggets of hard rock-gold. Always surprising us with their eccentric vision, the best Jethro Tull songs continue to define their era.

A rollicking collision of Mick Abraham’s stonking guitar riffs and Ian Anderson’s bullhorn vocals, the psychedelic blues of A Song For Jeffrey was the lead single from the band’s debut album, This Was. Written with friend and future Tull bassist Jeffrey Hammond in mind, the song is sung from the point of view of an aimless soul unsure of his destiny (“I tell myself tomorrow brings me/Things I would not dream today”).

Though A Song For Jeffrey failed to chart, Jethro Tull were invited to play it during The Rolling Stones’ 1968 concert film, The Rolling Stones Rock And Roll Circus. By this point, however, Mick Abrahams had quit the group and was temporarily replaced by Tony Iommi (otherwise known as the man who would help invent heavy metal as lead guitarist for Black Sabbath).

Having made dreams come true with their first UK Top 10 hit, Living In The Past, Jethro Tull enlisted the orchestral clout of string arranger David Palmer for their follow-up single, Sweet Dream. This dynamic pairing of horn fills and pummelling blasts of hard rock helped the song reach No.7 in the UK, as did the performance of drummer Clive Bunker thumping away like someone battering on a door to wake us up.

Rousing the listener from their slumber, guitarist Martin Barre’s insistent riffs propel Sweet Dream into our list of the best Jethro Tull songs by virtue of the grand sweep of its musical ambitions. By committing themselves to mixing rock’n’roll with expansive, classical-inspired flourishes, the group proved they were in it for the long haul.

This airy folk ballad about everyday life sees Ian Anderson mix his trademark flute-soloing with lyrical musings on mortality (“The tune ends too soon for us all”). Thanks to exquisite finger-picking on acoustic guitar, the song’s carefree breeziness peaked at No.11 in the UK.

As a post-Aqualung offering, it ​also gave us proof ​of Ian Anderson’s burgeoning maturity and intelligence as a lyricist. Philosophical but imbued with a cheery melody, Life Is A Long Song ponders the waking realisation of facing up to life’s challenges – just like a pep talk over a cup of coffee. “It’s a waking-up-in-the-morning song,” Anderson has said. “It’s a song of optimism.”

For Jethro Tull’s tenth album, Ian Anderson lyrically threw himself into the 16th century after being gifted a book on British folklore. “It certainly gave me thoughts about the elements of characters and stories that played out in my songwriting,” the singer later said. With the zeal of a court jester, the album’s opening title track was a folk-rock dalliance with medieval jollity.

A whimsical extravaganza of uplifting mandolin and tremulous flute-playing, Songs From The Wood saw the band diverge from the rest of their prog-rock peers by embracing a pastoral sound unashamedly inspired by ancient Elizabethan folk. By looking to the past and finding joy in bucolic depictions of England’s magic forests and the wonders of nature, Jethro Tull embraced a more playful sound.

Taken from the group’s second album, Stand Up, A New Day Yesterday was a brilliantly bluesy opener whose weighty groove found Tull charting a course for tomorrow. Following the departure of founding member Mick Abrahams, new guitarist Martin Barre brought with him a blend of blues-rock with an aptitude for English folk that would soon take Jethro Tull to the next level.

Elsewhere, Ian Anderson continued to assert himself as the unequivocal flute-rock master with his idiosyncratic soloing, while the gutsy quality of Glenn Cornick’s bass-playing makes for a dense, brain-swirling listen. Never released as a single, A New Day Yesterday nevertheless remains one of the best Jethro Tull songs, and continues to be a live favourite today.

Demonstrating the lyrical prowess Ian Anderson brandished throughout the group’s 1971 game-changer, Aqualung, album track Cross-Eyed Mary is a hook-heavy hard-rock favourite that continues to dominate Jethro Tull’s live setlists. Opening with a jazzy flute trill, the song builds from a marching rhythm to a sputtering rocker with occasional hints of Mellotron.

Lyrically, Cross-Eyed Mary is a grim character study of a young sex-worker who robs money from dirty old men. “The important issue is to see the spirituality in all people, even in Cross-Eyed Mary, a prostitute,” Ian Anderson later said. By placing an outsider at centre stage and telling her story, the song humanises those who, living on the fringes of society, would normally be ignored out of sheer moral cowardice.

With the Swinging 60s coming to a close, Jethro Tull’s 1969 single Living In The Past scored the band a UK No.3 hit while taking a swipe at overly idealistic hippies. “There were a lot of people talking pompously about love and peace and revolution,” Ian Anderson said, “but they’re not actually really quite sure what they’re stamping their feet about.”

With the epiphany that hippie utopianism was nothing more than a cul de sac, Living In The Past poured ice-water down the necks of the flower-power generation. Boasting an unconventional 5/4 time signature, the song also gave Jethro Tull their first UK Top 10, all the while demonstrating how the best Jethro Tull songs could fashion a unique fusion of flute hooks and jazz-inspired shuffling beats. By using a folk ditty as a vehicle for Ian Anderson’s cynical wit, it paved the way for things to come.

As fans of the British comedy troupe Monty Python, Jethro Tull decided to follow Aqualung with 1972’s Thick As A Brick, a satirical concept album made with tongue firmly in cheek. “There’s a definite strain of English tomfoolery running throughout,” Ian Anderson said of the record. “It seemed like an amusing idea to go down that route in this Pythonesque way and to try to use surreal humour.”

Flitting from gorgeous acoustic-based melodies to peculiar hard-rock time signatures, the 22-minute Thick As A Brick, Part I playfully lampooned not just the hifalutin tendencies of progressive rock but also shallow tabloid journalism and the foibles of the British class system.

Originally entitled The Passenger, Locomotive Breath was an allegorical screed which used train travel as a metaphor for a world going off the rails. Mimicking the chug and chuff of a steam engine, it’s easily one of the best Jethro Tull songs. Released in 1971 as the flagship single from the band’s prog-rock masterpiece Aqualung, it also gave the group their first taste of success in the US, where it peaked at No.62.

As a regular train commuter, Ian Anderson was keen to use this steam-powered rock’n’roller to ignite people’s awareness about the population explosion. The singer explained that Locomotive Breath was inspired by “that increase in globalisation, the planetary population, the growth of industry” and that it’s about “this runaway train and a sense of helplessness where you find yourself on something that you can’t stop”.

Kicking off the album of the same name, Aqualung’s unforgettable riff lures listeners into a Hogarthian portrayal of a greasy-fingered homeless man who picks up dog-ends from the street and warms his feet by the bog. Thanks to Ian Anderson’s masterful character study, the song forces us to face up to our inner prejudices related to homelessness.

“It’s the embarrassment, the awkwardness, the mixture of emotions you have when confronted with the homeless,” the singer tells Dig! of the song “You perhaps feel a certain anger or threat, but you also feel this tugging at the heartstring in terms of someone who is so much less fortunate than yourself.” In April 2021, the band released a politically charged music video for the song, directed by Iranian filmmaker Sam Chegini, which associated the ostracised character with modern-day prejudices about the Syrian refugee crisis. The social relevance of Aqualung remains hugely inspiring and deservedly tops our list of the best Jethro Tull songs.