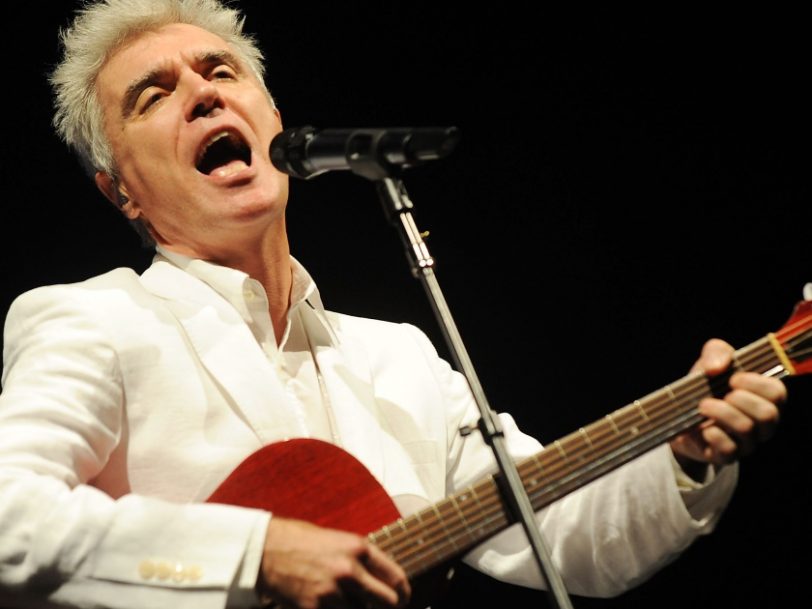 With his 2004 album, ‘Grown Backwards’, art-pop veteran David Byrne turned to melody and found yet more sonic worlds to explore.

By the time he released his seventh solo album, Grown Backwards, David Byrne’s fans had been primed to expect the unexpected from the former Talking Heads frontman. Since his influential group disbanded, Byrne had released solo albums that explored South American music, created soundscapes for dance productions, launched a record label specialising in unsung music from the far reaches of the globe (Luaka Bop) and released a book of photography (1995’s Strange Ritual). And that’s just for starters. His 2002 worldwide hit single, Lazy – a collaboration with British electronic duo X-Press 2 – might have insisted that a laidback lifestyle came easy to him, but clearly that couldn’t be further from the truth.

“I could indulge my recent love of melody”

Released on 16 March 2004, Grown Backwards was yet another rewarding sidestep. Rhythm had been a constant source of inspiration for Byrne – experiments with funk and disco had fuelled Talking Heads’ most forward-thinking and rewarding work, and Byrne’s first solo album proper, 1989’s Rei Momo, was a feast of Latin percussion. On Grown Backwards, however, rhythm took on a bit-part role; the tone here was stately and elegiac, with Byrne even tackling two operatic arias.

In the past, Byrne had turned the idea of songwriting on its head, using the grooves and mistakes that come with improvisation as a starting point. Grown Backwards, however, was rooted in a love of songcraft, as Byrne began with the tunes, humming melodies into a Dictaphone as they came to him and later building songs around them. He discussed the process with author Dave Eggers in an interview for The Believer: “Sometimes the writing and recording method becomes the unifying factor – the music on Remain In Light was written in the studio, layered one track at a time – on this one I knew in advance the make-up of the band, and… that I could indulge my recent love of melody.”

Going through a pile of micro-cassettes he had collected over the previous couple of years, Byrne began working “top-down, giving primacy to the melody, as the historical European music has usually done – Western Imperialist Music and all that implies”. The result was one of the most richly melodic and emotionally engaging collections of Byrne’s career.

Creating something accessible from disparate styles

Glass, Concrete & Stone is a stirring opener, with Byrne’s vocal underpinned by an inventive blend of cello and subtle electronic percussion. The orchestration is ramped up further on the following The Man Who Loved Beer, a cover of a Lambchop song, from their 1995 album, How I Quit Smoking. Where Lambchop’s original is draped with slow-moving, lush strings, Byrne employs choppy and dynamic string sections that propel the song forward with real urgency, creating a counterpoint to his measured delivery.

Au Fond Du Temple Saint is next, a take on the aria from Bizet’s The Pearl Fishers, featuring vocals from Rufus Wainwright. It’s an awful long way from Psycho Killer, but it makes for a moving diversion and is indicative of both Byrne’s ambition and his ability to fold disparate musical styles into his own work and yet create something accessible from them.

“That’s a big burden for a little song”

Empire is lyrically intriguing. Byrne suggested to Dave Eggers that it was a fake national anthem, written from a capitalist or Republican perspective, but also an ironic look at the music many of his contemporaries were recording. “The song would also question the seductive, anthemic nature of a lot of arena rock as well, pointing out its similarity to every stirring and dangerous song we’ve heard, cringed and cowered at. That’s a big burden for a little song.”

As the album continues, songs such as Tiny Apocalypse and Dialog Box feel like more musically mature takes on the livelier material associated with Talking Heads, but there’s always a surprise around the corner – see The Other Side Of This Life, which feels like Byrne’s take on a Broadway musical show-stopper, or the hazy Hawaiian feel of Astronaut.

Grown Backwards ends with the unusual one-two punch of Un Di Felice, Etera – another aria, this time from Verdi’s La Traviata – and a near-ten-minute take on that previous hit song Lazy. It’s a typically off-kilter ending to an idiosyncratic album that – over 25 years after Talking Heads’ debut – showed there were still new areas for David Byrne to explore.

Looking for more? Check out our best Talking Heads songs.