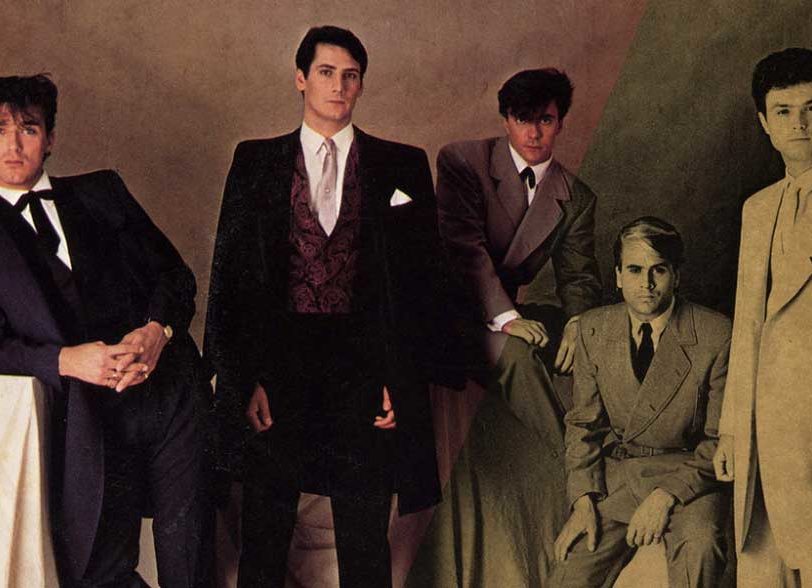 It says something about slow-burn 80s music marketing that Gold, so clearly a pop anthem in the waiting, was picked as the fourth and very last single from Spandau Ballet’s True album and wasn’t first off the blocks.

When Gold was finally released, on 5 August 1983, it followed the band’s most successful single, True, but though it didn’t quite reach the heights of its UK chart-topping predecessor (it had to make do with silver status, peaking at No.2 in the band’s homeland and a more modest No.29 in the US), Gold is arguably as famous.

The classic single is yet another from Spandau Ballet’s songwriter, Gary Kemp, and it crowned the band’s most successful year, 1983. There had been some reluctance to keep returning to the eight-track parent album, True, issued that March, for more singles, but radio had picked up on the anthemic track and Gary issued just a couple of demands to support the decision. “We need to think about mixing a 12” version,” he recalled in his 2009 autobiography. “I don’t want to do a dance mix – something orchestral, maybe. And… we need to do a video.”

Pop promos were critical currency in the MTV-dominated 80s, and Spandau Ballet’s arch-adversaries of the era, Duran Duran, had made a signature style out of filming clips in exotic locations. It seemed timely for Spandau Ballet to seize this opportunity to travel overseas for their first shoot. The Gold promo was filmed in Andalusia, Spain, by the late Brian Duffy, famous for his 60s fashion photography but then carving out a reputation for sharp clips such as The Human League’s Mirror Man and ABC’s All Of My Heart. The production also introduced Gary to his future first wife, Sadie Frost, and riffed on a stylish Bond-tinged theme, with – yes, you guessed it – Sadie smothered in gold paint.

Lead singer Tony Hadley was convinced the bombastic single, produced by celebrated hitmakers Tony Swain and Steve Jolley, would be another No.1 following its release, but a scheduling clash meant the band were unable to appear on Top Of The Pops, and the show’s producers decided against running the video. With Spandau Ballet stuck in Norway, the pivotal in-studio performance fell through, allowing KC And The Sunshine Band another week at the chart summit with Give It Up. “I’m sure that’s what cost Gold the No.1 slot,” Hadley later reflected.

“It was like guiding a boat on a rough sea”

Swain and Jolley, who had worked with Imagination and Bananarama, added a slick pop-soul sheen to the True album, which had been cut at the famous Compass Point Studios in Nassau, in the Bahamas. Spandau Ballet had struggled to find the right balance of sound and style with their previous album, Diamond, so a lot was riding on this new collection after Trevor Horn’s production re-spin of Instinction brought them back into the UK Top 10 the previous year. Lifeline and Communication built on the momentum, until True’s old-school balladry catapulted the five-piece into the premier league with a four-week run at No.1 alongside a sell-out UK tour billed Over Britain (and captured on DVD with the 2010 reissue of the True album).

The 12” remix of Gold matched Gary’s brief and ramped up the orchestral flair of this pop standard. Though perhaps a bit too frenetic to be an unashamed James Bond-theme pretender, there’s more than a nod in that direction, and it’s certainly a cut above the standard pop single (and remix) of the era. Gold was also the last track to be finished for the True album when post-production took place back in London.

“We had an allotted window of time to mix the tracks that had brought us to a final Sunday,” recalled Gary. “This final mix was turning into an all-nighter as Tony Swain, Johnny Keeble and I fought through the wee hours to get its delicate balance right. By nine o’clock the next morning we were bleary-eyed and cloth-eared but still all hands-on faders. It was like guiding a boat on a rough sea…” Such determination and professional drive was typical of the band’s work ethic at this time.

Did the group truly understand the long-term impact of this track? Perhaps the answer came five years later, when they were invited to perform Gold at a 1988 ceremony that saw Seoul pass the Olympic torch to the next host city, Barcelona. It’s a song forever now associated with sporting glory and, like any good Christmas No.1 or football song, will forever be first in line when programmers are looking for an appropriate musical lift.

Spandau Ballet might have been in a desperate race for supremacy against chart rivals such as Duran Duran or Culture Club but, with the power-punch of two back-to-back classics singles, they undeniably made that long-ago summer their own.