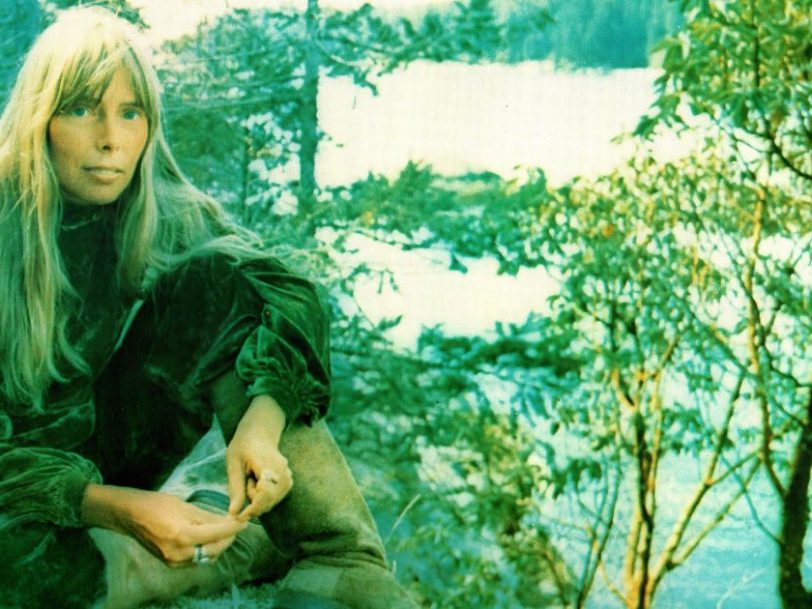 ‘For The Roses’: This Overlooked Joni Mitchell Album Deserves Garlands

Released between two critical and commercial peaks, the ‘For The Roses’ album finds Joni Mitchell’s artistry continuing to flourish.

Sandwiched between her most critically acclaimed album (Blue) and her most commercially popular (Court And Spark), Joni Mitchell’s fifth album, 1972’s For The Roses, is often overlooked. How could it possibly compete with the path-forging of its older sister Blue, or with the love showered on the younger Court And Spark? Just like a middle child, For The Roses is rarely afforded the same levels of attention as its siblings. It’s only by really getting to know the album that its distinctiveness shines.

Both For The Roses’ title and its album cover, which pictures Mitchell among nature, suggests something of a retreat from the dark-café confessionals of Blue. Is this a plunge into a natural paradise, the type that was paved over on Big Yellow Taxi? Well, no – at least not in any conventional sense. As Mitchell explained directly to her fans at a concert in 1972, For The Roses is “when you take this horse and he comes charging to the finish line and they throw a wreath of flowers around his neck and then one day they take him out and shoot him”. So definitely not about a bunch of pretty flowers, then. Mitchell had a cubist-like painting of a bunch of roses sticking out of a horse’s ass that she wanted for the cover – but she lost that fight with her record company, and the more conventional shot of her in the wild was used instead.

What Mitchell saw was an analogy between that horse, striving for glory before being killed when his usefulness ran out, with her own experiences in the music industry. Though she was arguably at the height of her commercial reach in the first half of the 70s, a prescient Mitchell knew that it would not last forever; she had seen the business spit out women, however talented, when the wrinkles set in. There is an aura of self-protection that infuses the whole of For The Roses, perhaps as a reaction to the exposure of Blue’s confessionals.

“This is a song about leaving this city,” Mitchell said to a Los Angeles concert audience in 1974, when introducing For The Roses’ title track. “Now, all of you who live here know that this is a great city and the worst at the same time; it’s like the most paradoxical place on Earth, you know?” Mitchell went on to explain how she had recently purchased some land back in Canada, and her new house was “a combination of caves in Greece, coffee houses in New York, and a prison cell.” As the audience laughs with her – Mitchell always had a way with stage patter – she then recounts an incident when, in her remote dwelling, she heard the sound of applause coming from outside. “And I jumped up from the bed and I ran out and I took a bow, and…” She pauses for comic effect. “No, no, no. I didn’t take a bow, I really didn’t.” She reveals that the sound was not applause at all, but arbutus trees, rustling their leaves in the wind.

By using this image in the song For The Roses, Mitchell is making a point about fame as a drug (you can take the star out of LA, but you can’t take LA out of the star). Those affected by it poise with cat-like readiness for acclaim, even when in the middle of nowhere. Mitchell was laughing at herself, sure, but the point about the corrupting influence of the “star-maker machinery/Behind the popular song”, as she would put it on Court And Spark’s Free Man In Paris, would influence many more songs on future albums.

“I kept on telling Joni I wanted her to write a hit,” said David Geffen, the boss of her new label, Asylum, with whom she’d signed after her contract with Reprise ran out. “She was always making fun of me about the idea that she should have a hit. But I wanted her to sell a lot of records.” Given Mitchell’s feelings on art-for-commerce, it probably surprised Geffen that she acquiesced to his request. For The Roses’ lead single was the sardonic but undeniably commercial, country-rock-tinged You Turn Me On, I’m A Radio. “When she sang it to me, it was almost her making fun of me for trying to get her to write a hit record,” Geffen sighed.

You Turn Me On, I’m A Radio is by far the most playful track on For The Roses. The mood of the rest of the album is decidedly darker, many of its songs dealing with her recent relationship with James Taylor. The Fire And Rain hitmaker had also been a presence on Blue (the “I want to knit you a sweater” line on All I Want was a particularly specific reference), but this time Mitchell was writing songs about their relationship imploding. Taylor’s heroin addiction, and his new affair with Carly Simon (Taylor was a strong lyrical influence for Simon’s own 1972 album, No Secrets, as well), provided angry fuel for songs such as Woman Of Heart And Mind, Cold Blue Steel And Sweet Fire and See You Sometime.

“I decided it was time the spiritual won out, at least for a little while”

It’s not only in lyrical content that For The Roses departs from Mitchell’s previous albums. While Blue was intense lyrically and stark musically, For The Roses offers more intricate arrangements and a greater number of musical contributors. Strings and woodwind instruments, at first, appear to soften the edges that were so sharp on Blue. But it’s an illusion; the arrangements blunt the initial emotional hit, but give the ultimate impression of a defensive wall. The vulnerability is, in some ways, more intense than on Blue. Even Electricity, the song on For The Roses with most in common with Mitchell’s delicately wrought Ladies Of The Canyon material, has an intriguing brittle quality that her earlier work lacked.

Released on 21 November 1972, For The Roses is an understated album, and this has led to its underappreciation. But it features serious contenders among the best Joni Mitchell songs, and revealed a more caustic, less directly sensitive side of Mitchell that hadn’t been seen to this extent. Her slightly lower voice (thanks to all of those cigarettes) added to the feeling of maturity and disillusion. “All my life I’ve had kind of a battle going, a running duality between the spiritual and the sensual, you know,” Mitchell said, when playing songs from For The Roses in concert. “I decided it was time the spiritual won out, at least for a little while.”