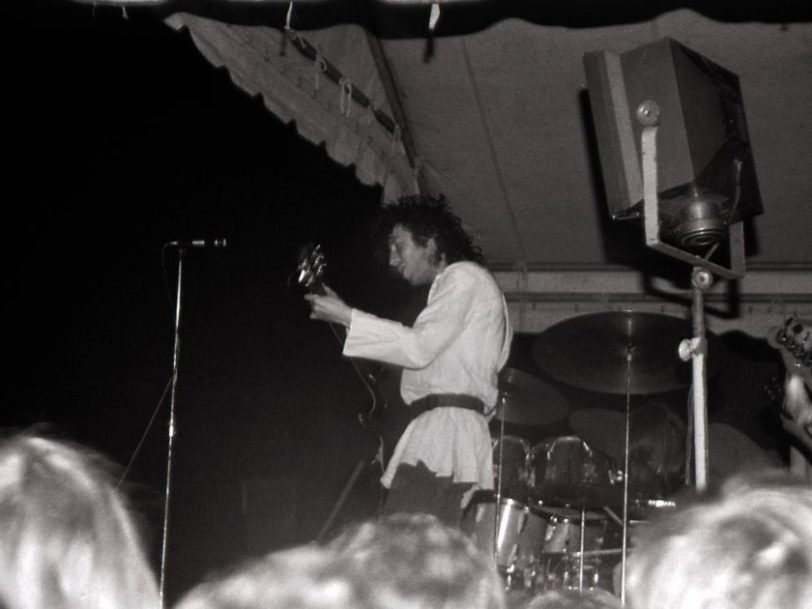 On 13 August 1967, Fleetwood Mac made their debut live shows with two performances at a local blues festival. The rest is musical history.

The National Jazz & Blues Festival of 1967 had the sort of line-up that time machines should be invented for, with Pink Floyd, Cream, Jeff Beck, John Mayall And The Bluesbreakers, Small Faces and Pentangle among the talent on show across the weekend. Even with that illustrious array, the Windsor-based festival is especially significant for featuring the live debut of a band that would outlast them all – Fleetwood Mac.

Peter Green’s Fleetwood Mac, as they were then known, played their first-ever live shows on Sunday, 13 August 1967. A first appearance was scheduled for half-past seven in the evening, on the festival’s main stage, and the second followed an hour-and-a-half later, in the marquee. Both shows saw the newcomers follow Chicken Shack, a UK blues band with a striking lead singer called Christine Perfect. The two bands later toured together; Christine would contribute piano to Fleetwood Mac’s second album, Mr Wonderful, and, in 1968, married their bassist, John McVie. In 1970, she officially joined Fleetwood Mac and became a pivotal part of their continued success.

Back in 1967, though, the fledging Fleetwood Mac were thought of by many as a Peter Green solo project in all but name. The phenomenally gifted blues-rock guitarist had been a full-time member of John Mayall And The Bluesbreakers from July 1966, before quitting to start his own band in the early summer of 1967. Green’s reputation preceded him, but the guitarist was keen for Fleetwood Mac to be a collaborative outfit, as drummer Mick Fleetwood remembered in his 2017 book, Love That Burns: A Chronicle Of Fleetwood Mac, Volume One: 1967-1974: “I think that people were expecting Fleetwood Mac to be just a vehicle to launch Peter Green into a solo career much like Cream had been for Eric Clapton, the other guitar god, but that’s not what Peter wanted; he wanted to be part of the band.”

In a particularly brazen move, Green named his new act after the rhythm section he wanted to join him – former Bluesbreakers Fleetwood and McVie. The drummer was immediately on board, but McVie was initially reticent, preferring to rely on the steady income that The Bluesbreakers offered, rather than take a risk on the less certain earnings he might receive with an unproven band. Green recruited a stopgap bassist in then schoolteacher and former member of Savoy Brown, Bob Brunning, and added slide guitarist and pianist Jeremy Spencer, who had been making a name for himself with the blues trio The Levi Set.

“A few weeks later, John called Peter to tell him he was ready to join us”

It was this line-up that took to the stage that August evening at Windsor Racecourse, the site of the seventh National Jazz & Blues Festival. The group kicked things off with the raucous 12-bar blues of Elmore James’ Talk To Me Baby, Green’s searing solos bringing an immediate intensity to the performance. The smouldering I’m Going Home followed, suggesting Fleetwood Mac would prove as capable of soundtracking turbulent emotional weather as they were filling dancefloors. I Need You, Come On Home To Me was next, a swaggering slow blues that took its cue from Elmore James’ It Hurts Me Too.

From there, the group moved into a blistering instrumental, with Green’s whip-smart solos again taking centre stage. The guitarist’s love of Elmore James resurfaced on a stomping cover of the bluesman’s Fine Little Mama, but a Green original, The World Keep On Turning, slowed the pace; it would be the only original song from the set to make Fleetwood Mac’s self-titled debut album, which would be released just six months later. The group closed proceedings with the no-holds-barred blues boogie of Shake Your Moneymaker, another Elmore James cover that would become a key part of their early repertoire, ending Side One of their debut.

The show announced the arrival of a new musical force and proved an important factor in Peter Green snagging his bassist of choice. Mick Fleetwood shared an abiding memory of the show in Love That Burns: “I have such a clear vision of John McVie standing at the side of the stage while we were playing at Windsor… A few weeks later John called Peter to tell him he was ready to join us.” The rest is musical history.