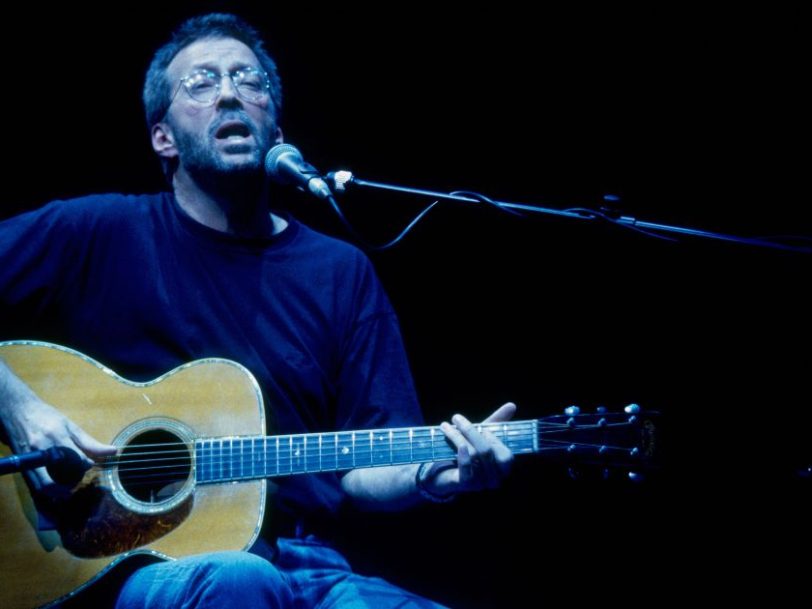 The best-selling live record of all time, Eric Clapton’s ‘Unplugged’ album captured a cathartic performance from the grieving guitarist.

Eric Clapton’s signed cheque for $100 ended up framed in a Warner Records executive office. It was in payment of a bet Clapton had with his then manager, Roger Forrester, about whether the Unplugged album would be successful. “I didn’t really want it to be an album, to be honest, and I bet Roger that it wouldn’t sell. I mean wouldn’t sell anything,” the guitarist recalled in 2012. He could not have been more wrong. Released on 25 August 1992, Unplugged became the best-selling live album of all time, with 26 million copies sold worldwide.

“I was shocked at the sales – and very pleased”

The album was the audio recording of a concert shown as part of the MTV Unplugged series – a show that began in 1989 and which had already featured Sting, Paul McCartney and Mariah Carey – and filming was kept secret. The studio audience of 300 was made up of 100 invited guests and 200 winners of a BBC Radio 1 quiz, and they met in central London on Thursday, 16 January 1992, to be taken in coaches to Bray Studios, in Berkshire, for a concert beginning at 6.15pm. The audience had all been asked to wear dark clothes, to fit in with a set that used drapes to create the feel of a nightclub.

Clapton credited guitarist Andy Fairweather Low with restructuring four of his original songs and a range of blues classics so they would work in an acoustic context, calling him the “backbone” of the project. Clapton and Fairweather Low rehearsed for a week in Chelsea and then spent two days with the rest of the band working out how to play the set acoustically. Keyboardist Chuck Leavell, a noted member of The Allman Brothers Band and a veteran keyboardist for The Rolling Stones, was joined by Nathan East (bass), Steve Ferrone (drums) and Ray Cooper (percussion). There were challenges for all of them. Ferrone had to replace his drumsticks with thunder-rods – small strips of wood that allowed him to reduce the volume of the drumming. East, used to playing an electric bass, had to quickly get used to a new acoustic double bass.

The recording of the Unplugged album came during a traumatic time for Clapton, when he was still processing his grief over the tragic death of his four-year-old son, Conor. “A lot of the music in Unplugged was linked to the passing of my son and the long dark period after it,” he said. This included the instrumental Signe, which had been written on a boat after his son’s death and was now chosen to open the show. Clapton also sang a plangent version of Tears In Heaven, a lament for the child who, less than a year earlier, had accidentally slipped from the 53rd-floor window of a New York City apartment building. The version on Clapton’s Unplugged album is a masterful example of how an artist can sometimes channel pain into memorable music.

Clapton said that one of the main appeals of the project was that it offered “an opportunity to do any cover you wanted in an intimate setting”. He had his teenage years as a pub performer in England firmly in mind when he recorded a version of Nobody Knows You When You’re Down And Out. “I’d known that song since I was 15 and it was standard in the folk clubs when I was growing up,” he explained. The song featured backing vocals from Tessa Niles and Katie Kissoon, the latter famous for singing on the 60s hit Chirpy Chirpy, Cheep Cheep and later working as backing vocalist for Van Morrison.

Clapton, who played six- and 12-string acoustic guitars, plus a dobro, during the gig, reprised another song from his teenage repertoire with a version of San Francisco Bay Blues, a noted folk song written by Jesse Fuller.

“It validated my role as a messenger of music”

The filler set list on the deluxe-edition reissue of Unplugged reflects Clapton’s deep knowledge of the blues, and is in part a tribute to his heroes, including Big Bill Broonzy (Hey Hey), Son House (Walkin’ Blues), Alberta (Lead Belly) and Big Maceo Merriweather (Worried Life Blues). For his all-time hero, Robert Johnson, Clapton chose to tackle a challenging rarity called Malted Milk. He also covered classics from his own past career, including Layla, a song he’d originally cut with Derek And The Dominoes in 1971, for the album Layla And Other Assorted Love Songs, and which he introduced to the audience with the words “see if you can spot this one”. He also performed two new songs, Circus (Left Town) and Lonely Stranger.

Being a television show, there were false starts and multiple takes of songs. During one break, Clapton broke into an impromptu version of Muddy Waters’ Rollin’ And Tumblin’, a song he used to perform with Cream. The seasoned musicians quickly joined in, even though Clapton had started in the wrong key, and the frontman called out to the director, “Sid, you get that?” when they finished. Happily, the cameras caught every moment, and the impromptu performance was used as the closing song to the original Unplugged album, which came out following the success of the television special. The record went on to win three Grammy awards, including Album Of The Year.

“I first thought it was a bit ropey, a TV thing, but there was so much encouraging feedback that I thought, Let it be, when it was released as an album,” Clapton later reflected. “I was shocked at the sales – and very pleased. It was encouraging to me that my abilities in their most basic form had some kind of appeal. It meant something to people to hear that style of music. It validated my taste in what I was listening to and in my role as a messenger of music.”

Find out where Eric Clapton ranks among our best guitarists of all time.