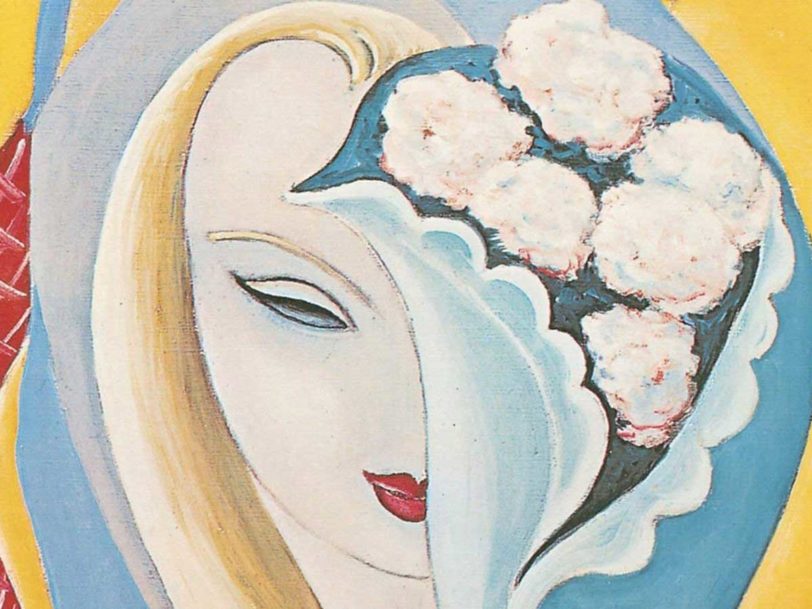 Layla And Other Assorted Love Songs: Derek And The Dominos’ Masterpiece

Charting a story of love and lust, desperation and addiction, ‘Layla And Other Assorted Love Songs’ remains an emotionally raw work of art.

Eric Clapton’s life story is a long and winding one of many intriguing chapters. The one that spawned Derek And The Dominos’ only studio album, Layla And Other Assorted Love Songs, is perhaps the most captivating. You will be furiously turning pages, reading not just of a virtuoso guitarist coming out of his shell to write and sing – launching a stellar solo career in the process – but of love triangles, drug addiction, tragic deaths and five of the greatest guitarists of all time.

After taking an interest in songcraft from the folk/roots/soul/rock group The Band – the former Bob Dylan backing group that effectively invented Americana with their 1968 debut album, Music From Big Pink – Clapton, fresh from the dissolution of his iconic blues-rock power trio, Cream, formed an English equivalent, Blind Faith. For their US tour, at the suggestion of his best friend, George Harrison, he took Southern roots group Delaney & Bonnie And Friends as support.

This group, featuring Bobby Whitlock on keyboards, Carl Radle on bass and Jim Gordon on drums, were more of a unit than the already tiring Blind Faith, and they gave Clapton yet another musical direction to explore. Eager to learn, he stayed behind in America after the Blind Faith tour, playing with the charismatic and talented Delaney Bramlett. They struck a deal: Clapton would tour with Delaney & Bonnie And Friends; in return, Bramlett would help write and produce a debut solo album for Clapton.

The English guitar legend not only held up his side of the bargain for the southern American maverick, but roped in his Beatle-mate Harrison to appear on the live album recorded on the UK stint of the tour in December 1969, released the following year as On Tour With Eric Clapton.

This is where it gets interesting. The two guitarists met way back in the heady days of Beatlemania, when Clapton was still relatively unknown and part of The Yardbirds; they had grown closer over the years, with Clapton being one of very few musicians to be personally invited to play on a Beatles track (While My Guitar Gently Weeps). The pair would regularly meet and discuss their work, with Harrison writing one of his most famous songs, Here Comes The Sun, in Clapton’s back garden. Eric was not only close to George, but also his wife, Pattie Harrison. Looking back, he noted their similarities: “I think we shared a lot of tastes; cars, clothes – and women, obviously.”

We’ll have to stick a pin in that for now, as the second half of Clapton’s bargain needs to be seen to. In January 1970, Clapton and his new music gurus flew to Los Angeles to work on Clapton’s debut solo album. Partly due to the guitarist’s reluctance to take centre-stage, the self-titled record was saturated in Delaney Bramlett. Released in August 1970 and making the Top 20 in both the UK and US, the marked difference in Clapton’s musical direction made for a fairly underwhelming reception, though the album saw the guitar god taking a vital step towards finding his feet as a singer and songwriter.

“He poured his feelings into his music”

With that in mind, keyboardist Bobby Whitlock arrived at Clapton’s Surrey house in May 1970 and they started writing together. Clapton’s inspiration came from events unfolding at the time: he was becoming more and more obsessed with Pattie Harrison, and during the spring and summer of 1970, they began to see each other casually. Pattie later recalled that Clapton found it difficult to talk about his feelings: “instead he poured them into his music and writing”.

Unaware of the extent of his best friend’s feelings for his wife, George Harrison asked Clapton and various members of the group to appear on his own debut solo album, All Things Must Pass. During these sessions a new band, Derek And The Dominos, officially formed, comprising of Clapton, Whitlock, Radle and Gordon. With written material in tow, this group flew to Miami in August 1970 to record their own album. More confident as an emerging all-round artist, and with bucketloads of inspiration from an unrequited love, Clapton was able to take the lead properly this time around.

“Are you going with him or coming with me?”

Enter the final player. Duane Allman, perhaps the greatest slide guitarist of all time and part of the revered Allman Brothers Band, had heard Clapton was in town. The two were eager to meet and, on doing so, Clapton invited him to record with The Dominos.

The magic that ensued was breathtaking. The fusion of guitar playing – mainly Clapton on rhythm/lead and Allman on slide – is among the highest level of proficiency seen at one set of sessions. The rest of the band are tight throughout and captivate a bluesy, jamming feel.

The result, a 14-track double-album titled Layla And Other Assorted Love Songs, was not only a masterpiece, but a devotional to a woman Clapton loved so much but could not have. When he played the tape of the song Layla to her, Pattie Harrison was taken by its raw emotion. They later went to a party in London together and, when George turned up, Clapton confessed he was in love with his best friend’s wife. “Well, are you going with him or coming with me?” the ex-Beatle asked the woman stuck in the middle of a love triangle. George won the day – for the time being.

A bluesman at heart

But why was Layla And Assorted Love Songs so good? First off, the musicianship is beyond belief. Clapton is a bluesman at heart – take, for instance, the groove of Anyday and Tell The Truth, or the yearning of Bell Bottom Blues. The album ebbs and flows beautifully, with the easy-natured I Looked Away and I Am Yours offset by the pounding and frantic urgency of Why Does Love Got To Be So Sad? and the rocking Keep On Growing.

Now we come to the crux of the matter. Taking the album title in its entirety, this is a collection of love songs sung to one woman. And Clapton’s vocals show it: there is a rawness throughout, evoking emotions through both power and tenderness, marking a definite step up from his vocals on that self-titled album.

Lyrically, Clapton bares his soul in ways he had never done before – or would do after – with each track awash in pleas and confessions. Hear the anguished way he sings “Do you want to see me crawl across the floor to you?” on Bell Bottom Blues; or “We could have a love so true/We could go on endlessly” on Anyday; or, of course, the ripping chorus of Layla itself.

“You just love that woman so much”

Layla And Other Assorted Love Songs’ five cover songs are all obvious choices, and they’re all done with justice. Take Duane Allman’s yearning slide guitar, in perfect support of Clapton’s own guitar and vocals on Nobody Knows You When You’re Down and Out, or the spontaneous feel of Key To The Highway. Another blues groove, It’s Too Late, proclaimed yet more heartbreak: “Wish I had told her she was my only one/But it’s too late, she’s gone.”

They duo give a beautiful nod to the other guitar god of the time, Jimi Hendrix, covering Little Wing in almost as dreamy a fashion as the original. Having performed the song a handful of times during the live shows staged to help the band gel before recording Layla And Other Assorted Love Songs, it was meant to be an ode to a living hero. But, with his tragic death in September, only about a week after they recorded the song, it became a touching tribute to a lost legend. Hendrix was only 27 years old.

Perhaps the best cover is of blues and guitar legend Freddie King’s Have You Ever Loved A Woman. The guitar work from both men is infectious and the song contains perhaps the most apt lyric of all: “You just love that woman/So much it’s a shame and a sin/But all the time you know/She belongs to your very best friend.”

If you thought that was good, Layla is utter ridiculousness. The opening riff you hear is Clapton’s, but hot on its heels is a track of duplicate solos from both men, with Allman on slide guitar. Clapton builds upon the driving rhythm track with his own lead for the verses, with Allman letting lose on alternative slide solos throughout. Clapton also provided upper and lower harmony tracks to help the lead along, not to mention that slide solo from Allman before Jim Gordon’s beautiful piano coda comes in. Add the main man’s impassioned vocals and you have one of the greatest seven-minute soundbites of all time.

All these factors mean that, simply put, Layla And Other Assorted Love Songs is a masterpiece. Released on 9 November 1970, it was, however, favourably reviewed but commercially overlooked due to Clapton’s insistence on anonymity.

“I took a three-year holiday”

What was the fallout from such a monumental album? Clapton’s drinking and drug use was reportedly getting out of hand towards the end of the sessions – Bobby Whitlock recalled, “It was there, an abundance of it,” and even claimed that he, Clapton and Allman flushed a load down the toilet in order to finish recording the album. The Dominos fell apart. Pattie Harrison didn’t have it in her to leave George, so Clapton went into exile, claiming, “I took a three-year holiday,” while slumbering in self-pity and addiction.

Duane Allman’s story is even sadder. Almost exactly a year after the release of Layla And Other Assorted Love Songs, the undeniably talented guitarist died in hospital following a motorcycle accident. He was just 24 years old. Thankfully, his legacy lives on far longer than he did; in 2019, the 1957 Gibson Les Paul Goldtop guitar he used on the album’s sessions sold at auction for over $1 million.

“I’d rather she was with him than some dope”

After getting help to kick his heroin habit, Clapton recorded and released a comeback album, 1974’s 461 Ocean Boulevard, a commercial success that highlighted yet more new musical influences, setting in motion a much-lauded solo career. Meanwhile, the Harrisons’ marriage slowly deteriorated, and Pattie finally left George for Clapton. Still good friends, however, the ex-Beatle said he was fine with the situation “because he’s great; I’d rather she was with him than some dope”.

Part of a whirlwind chapter in Eric Clapton’s life, Layla And Other Assorted Love Songs charts a year-long story of love and lust, desperation and addiction, creativity and virtuosity. With a few decent guitarists to boot, that year or so, half a century ago, was quite something.