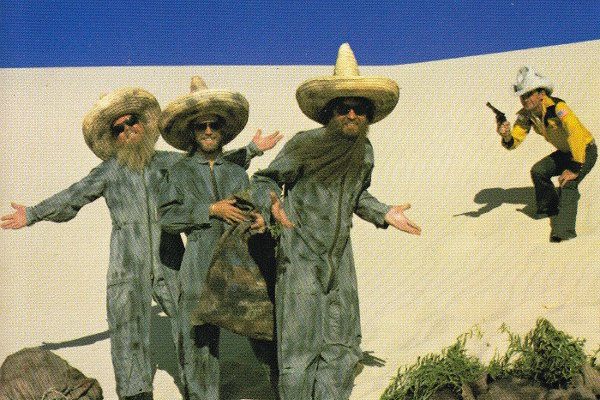 ZZ Top spent the first seven years of their existence honing the sound that produced hits such as La Grange and Tush. But by the time the Worldwide Texas Tour concluded in 1977 – after 18 months on the road in support of their Fandango! album, during which time they set out to “bring Texas to the people” with a stage set that featured free-roaming Lone Star State livestock – the band were burnt out and in need of a break. When three months turned to two years, the trio emerged with their trademark beards, a new record label and a fresh sound which they unveiled on the Degüello album and then built upon for El Loco.

“It was a big growth period”

When the Worldwide Texas Tour was over, the group “were just exhausted”, bassist Dusty Hill later recalled. “We had literally been on the road since we formed in late ’69. Everybody just wanted to go do a little somethin’, ya know, get off the road.” During that break, Hill got a job at a nearby airport in order to, ironically, find some grounding, while drummer Frank Beard took the time to straighten out. Meanwhile, frontman and guitarist Billy Gibbons headed to Europe.

“We were going to take three months, just to kind of reorganise, relax a bit, chill out, which turned into six months, which became two years,” Gibbons later reflected. “And so I took off to see what was happening out there. I was pogoing with punks in England and then dipping into learning the ways of the gurus from India. It was a pretty wide-ranging set of unusual experiences. It was, I think, a big growth period.”

“We were eager to experiment”

By 1978, punk and new wave had infiltrated the mainstream, with albums from Blondie (Parallel Lines) and Talking Heads (More Songs About Buildings and Food), plus The Cars’ self-titled debut, shifting public interest away from the gritty guitar rock that had defined the early 70s. Refreshed and looking to distance themselves from the sounds and the subject matter of their previous records, ZZ Top began to assimilate a punk attitude into their sound for Degüello, before adding more new-wave touches for El Loco, whose use of synthesiser ushered in a new era for the group.

Produced by the band’s then manager, the late Bill Ham, and recorded and mixed by Terry Manning at Ardent Studios in Memphis, Tennessee, El Loco was helmed by the team that had shaped ZZ Top’s albums from 1973’s Tres Hombres onwards. This time, however, pre-production work from Linden Hudson, who had helped build a recording studio for Frank Beard, aided the group in their search for a new direction.

“He was a gifted songwriter, and had production skills that were leading the pack at times,” Gibbons said of Hudson in 2013. Speaking to MusicRadar, the guitarist continued, “He brought some elements to the forefront that helped reshape what ZZ Top were doing, starting in the studio and eventually to the live stage. Linden had no fear and was eager to experiment in ways that would frighten most bands. But we followed suit, and the synthesisers started to show up on record.”

Hudson’s influence on the group can’t be understated, and though his role on El Loco isn’t as integral as it would be on its follow-up, Eliminator, the introduction of synthesisers and synthetic drum beats was pivotal. Meanwhile, the band also found inspiration from new-wave-pop crossover acts such as The B-52s and Devo, whose sound would soon make itself felt in ZZ Top’s new music.

Taken together, El Loco reveals a band in transition. Opening song Tube Snake Boogie is a simple but effective 12-bar blues number that simmers underneath Gibbons’ smooth vocals and scorching guitar riff, while I Wanna Drive You Home offers a further reminder of the blues-rock road the band had travelled, as Gibbons snarls his way through automotive innuendos.

The album is at its best, however, on the less characteristic material, such as the country-infused torch song Leila, which showcases a gentler side of the band, and the soft-rock of It’s So Hard, which more closely resembles Jackson Browne than it does anything ZZ Top had recorded up to this point. Elsewhere, the warbling synth intro and cracked-out metronomic beat of Groovy Little Hippy Pad, and the jerky, stop-start rhythms of Party On The Patio, were major departures that showed the group could inhabit different styles with ease.

Released on 20 July 1981, El Loco peaked at No.17 in the US and set the trio on the path that would lead to Eliminator. Supercharging everything they’d learned at the turn of the 80s, that record would, in turn, catapult ZZ Top to international stardom while defining much of the style and substance of the decade.