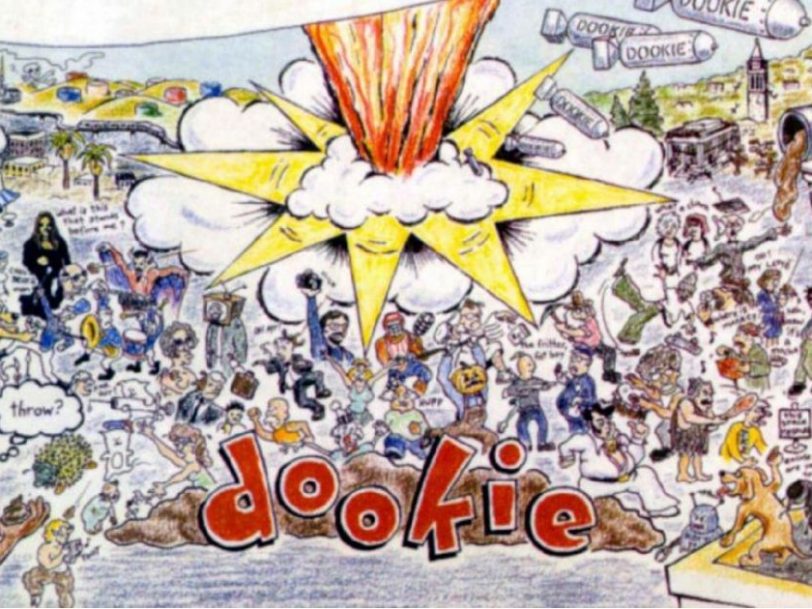 ‘Dookie’: How Green Day Dragged US Pop-Punk Into The Mainstream

Green Day’s Dookie is the kind of record every rock band worth their salt dreams of making. First released in early 1994, this hit-stuffed jamboree moved over 20 million copies, made its creators global stars and is now widely credited as the record which introduced US pop-punk to the mainstream. Indeed, it’s now viewed in a similar light to AC/DC’s Back In Black or Nirvana’s Nevermind: as a record that’s a mandatory purchase for discerning rock fans of all stripes.

“An upbeat flavour of punk in a bleak era”

On their own, the statistics are staggering, but Dookie’s success is all the more remarkable when you consider Green Day’s circumstances when they recorded it. Thanks to the unexpected success of their second album, Kerplunk! (which sold 10,000 copies on its day of release), the band became the flagship act for San Francisco indie label Lookout Records, but they never saw themselves as a mainstream act. Consequently, when Lookout boss Larry Livermore told Billie Joe Armstrong he’d received interest from major-label A&R men, the Green Day frontman initially wrote their advances off as crank calls.

Yet once they understood these overtures were for real, Green Day became the subject of an intense bidding war involving several potential suitors. One executive even attempted to woo the band with a trip to Disneyland, but the Bay Area trio remained unimpressed – at least until they met Rob Cavallo from Warner’s Reprise subsidiary.

A producer with session-musician experience and an unabashed lover of punk rock, Cavallo had been blown away by a tape of Green Day’s new songs, and he was determined to sign the group. Fortunately, he was the one person from this shiny new world who made a positive impression on the band.

“He understood what we were looking for”

“He’d made The Muffs’ record and we liked it a lot,” Armstrong told Loudwire in 2019, explaining that their West Coast contemporaries had been an influence on the type of record Green Day wanted to make. “If we were shooting for any kind of sound, then that was it. And Rob was great. He understood what kind of guitar and drum sounds we were looking for.”

Unanimous in the belief that they’d found their dream label, Green Day duly signed up. They left Lookout on friendly terms, though their transfer angered some long-standing fans from their home base, San Francisco’s indie music club 924 Gilman Street, who felt the group had sold out to The Man. Yet the band knew they had to be pragmatic if they were to survive in the long term.

“I couldn’t go back to the punk scene, whether we were the biggest success in the world or the biggest failure,” Armstrong told Spin in 1999. “The only thing I could do was get on my bike and move forward.”

As they prepared to record Dookie, Green Day had no idea they were about to score a “David and Goliath”-like victory over mainstream rock. “I remember thinking, Let’s just record this thing, and make sure we have money left over, so we can pay our rent, in case anything happens,” Armstrong later told Rolling Stone. But the group did know they’d written the best Green Day songs to date.

“There were nerves… but we were ready”

To get those songs on tape, Cavallo booked the band into Berkeley’s Fantasy Studios, where he acted as producer, with Neill King engineering and Jerry Finn mixing. By major-label standards, everything was done and dusted in an economic three-week spell, but then Green Day already knew the songs inside out, and were determined to realise them to the fullest of their abilities.

“There were nerves. We felt like little kids in a candy store,” Armstrong told Loudwire. “But Mike [Dirnt, bass] and Tré [Cool, drums] were tight. That album was some of the tightest they’d ever played. We were ready. We didn’t want to be one of those bands that got stuck in the studio.”

Neill King added: “The guys had been performing many of the songs live, so they were very familiar with them when they entered the studio and they had supreme confidence in them. They knew they were hot shit, they knew the material was terrific, and it was just a case of us getting it right.”

Even the briefest of listens to Dookie revealed that all concerned were right to feel the group were on to something special. As soon as Tré Cool’s explosive drum roll led into the opening track, Burnout, the excitement was palpable and, as the second song’s title suggested, the album perfectly captured sound of a young, hungry band simply “having a blast”.

“Apathy has rarely sounded so passionate”

Virtually every track on Dookie sounded like a potential hit single, and several of them – Welcome To Paradise, the nagging When I Come Around and the dynamic Basket Case – followed through on this promise, making waves in the Top 10 of Billboard’s Mainstream Rock Chart and in the UK Top 30.

Despite the success of its singles, and several shrewd reviews such as The New York Times’ observation, “Punk turns into pop in fast, funny, high-powered songs… apathy has rarely sounded to passionate,” Dookie was initially a slow-burner following its release, on 1 February 1994. However, that all changed during the summer, after Green Day stole the biggest thunder at events such as that year’s Lollapalooza and the 25th-anniversary Woodstock festival.

“It was important for us to be ourselves, no matter what”

With Green Day hailed as fully-fledged stars after these high-profile events, Dookie truly caught fire, peaking at No.2 on the Billboard 200 and eventually gaining a prestigious diamond certificate for sales of over ten million copies in the US alone. The band’s emergence also filled a void for US youth following Nirvana frontman Kurt Cobain’s tragic suicide. As Kerrang! cogently observed, “Billie Joe Armstrong presented a more upbeat flavour of punk rock hero in a suddenly bleak era.”

Reflecting on Dookie’s success in Rolling Stone, Armstrong later said, “There was a lot of whining in rock at that time. By nature, we’re extroverts. So that’s what came across in our songs… It was important for us to be ourselves, no matter what, and have a devil-may-care attitude about it.”

“My mantra as a producer at that time was, ‘I want you to sound like the best version of yourselves,’ Rob Cavallo added. “I think Dookie is a really good snapshot of what Green Day sounded like at that time. And that’s why I think it works: because it’s honest.”