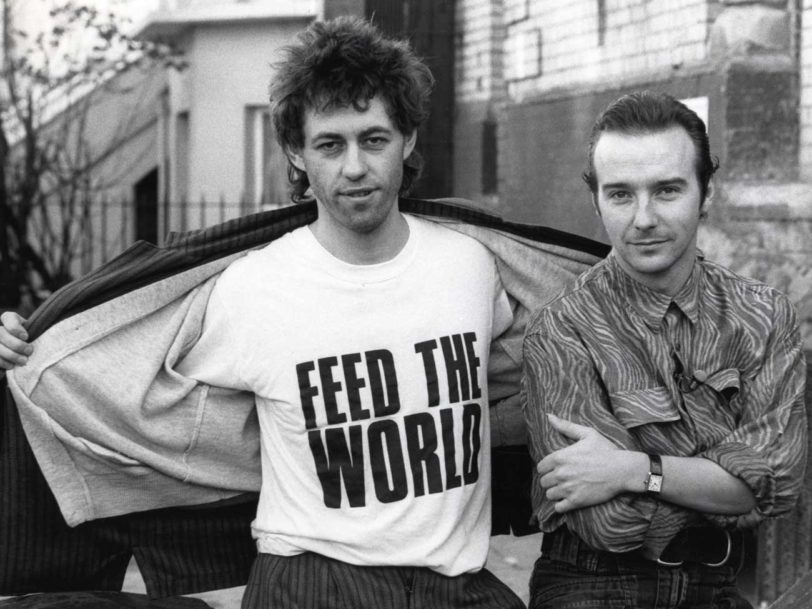 Do They Know It’s Christmas? How Band Aid Fed The World

In writing Band Aid’s charity single, Do They Know It’s Christmas?, Bob Geldof and Midge Ure created a gift that keeps on giving.

Do They Know It’s Christmas?, one of the best Christmas songs of all time, was inspired by the Ethiopian famine of 1983-1985. After seeing a BBC report on the crisis in 1984, singer Bob Geldof decided that he needed to use his fame to raise awareness and money to help those impacted by the famine. Alongside Midge Ure, frontman of Ultravox, the two brought together some of the UK and Ireland’s biggest musicians, under the collective name Band Aid, to record a charity single that would inspire the world.

Released on 3 December 1984, Do They Know It’s Christmas? becoming the fastest-selling single in UK chart history (a record that it held for 15 years). Helping to raise millions of pounds for charity, the song’s impact can still be heard today.

Here’s how it all happened…

We let in light: the birth of Band Aid

On 23 October, BBC TV journalist Michael Buerk had led a report on the famine hitting Ethiopia at the time. Long before the rise of social media, the broadcast went viral and the world witnessed the poverty and pain being suffered in East Africa. Bob Geldof, lead vocalist of the Irish rock group The Boomtown Rats was one of many to see Buerk’s coverage and felt the urge to do something to lend a hand. After linking up with Midge Ure, the two planned to create a charity song, enlisting as many of their fellow A-listers as possible to contribute.

Knowing they’d have to pay royalties if they recorded a cover version – precious funds that could be donated to the Ethiopians’ plight – Geldof and Ure chose to write an original song. With time against them, the first demo of Do They Know It’s Christmas? was based on some unused Boomtown Rats lyrics and a festive melody Ure had written especially for the project. Given a bit of fine tuning, the pair had their song.

Geldof had initially asked Trevor Horn to produce the song, but Horn, who had overseen hits for artists such as Spandau Ballet, Pet Shop Boys and Frankie Goes To Hollywood, said he’d need nearly six weeks to produce the track. That wouldn’t work for Geldof, who wanted the song out in time for Christmas, so Midge Ure stepped up to produce the song, using Horn’s own SARM West Studios, in London’s Notting Hill area, free of charge for a marathon 24-hour stint at the end of November.

With the session booked for Sunday, 25 November, nearly 40 quintessential 80s music icons were recruited to form Geldof’s supergroup – now known as Band Aid – among them former Police frontman Sting, leading lights of the New Romantics scene, Duran Duran and Spandau Ballet, along with Paul Weller, Status Quo, Bananarama and U2.

Ure had prepared the sing’s instrumental backing track with the help of both Paul Weller and Duran Duran’s bassist, John Taylor, with Phil Collins later adding drums on top. Meanwhile, Geldof had been building hype with the media, ensuring the recording session attracted a large media presence. As well as the big-name stars who had originally been invited to appear, pop singer Marilyn turned up for the session, hoping to reignite his career after scoring a 1983 hit with Calling Your Name. Kool And The Gang also made an unanticipated appearance; labelmates with Geldof’s Boomtown Rats, the US funksters happened to be in Phonogram’s London offices at the time Geldof pitched the song to the label.

In order to get everyone involved straight away, the session begun with all the artists singing the song’s chorus in unison. Once the refrain had been recorded, each individual took turns to sing different lyrics under Midge Ure’s direction. Having flown in from New York that day in order to participate, Culture Club’s Boy George arrived at SARM West at 6pm, becoming the last singer to record his parts.

Midge Ure worked on Do They Know It’s Christmas? through the night. At 8am the following morning, the recording was sent off to the pressing plants. Just over a week later, the single was released in stores, with artwork created by British pop artist Peter Blake, who’d designed the album cover for The Beatles’ Sgt Pepper’s Lonely Hearts Club Band.

With advanced orders of more than 250,000 copies, Do They Know It’s Christmas? quickly hit a million sales within its first week of release. Geldof promoted the track tirelessly, ensuring that Radio 1 played the song every hour, and that BBC One broadcast its promo video before the start most of their TV shows. Also encouraging sales was Jim Diamond, then holding the UK No.1 spot with his song I Should Have Known Better. “I’m delighted to be at No.1,” Diamond said, “but next week I don’t want people to buy my record; I want them to buy Band Aid instead.”

By the time it hit No.1 in the UK, the week following its release, it had outsold all the other Top 40 singles together. Sitting at the top spot for five weeks, it also fought off Wham!’s iconic seasonal hit, Last Christmas, in order to become 1984’s Christmas No.1. (George Michael had taken part in the Band Aid project, and Wham! also donated all their Last Christmas royalties to aid famine relief in Ethiopia.)

Fans of the artists involved were delighted to see them coming together for a good cause, but critical reception wasn’t as great. While journalists praised Geldof’s intentions, they were less effusive about the song’s simplistic musical structure and certain condescending lyrics – particularly the line “Well tonight thank God it’s them instead of you”. Written in an attempt to emphasise how lucky the Western world should have felt, many felt it had the effect of dismissing the Ethiopians’ plight. Do They Know It’s Christmas? was also seen by some as furthering stereotypes about standards of living in Africa, with lyrics such as “Where nothing ever grows, no rain nor rivers flow” seemingly implying that drought was a primary cause of the famine. In reality, however, the crisis had largely been brought on by the civil war then ravaging the country. Subsequent versions of the song – including 1989’s Band Aid II recording, involving Kylie Minogue, Chris Rea and Cliff Richard – have tweaked the lyrics.

Feed the world: impact and legacy

Over three decades later, the song retains its hugely positive impact. As Midge Ure put it to Rolling Stone: “It was a song written for a specific purpose: to touch people’s heartstrings and to loosen the purse strings.” It certainly succeeded. The single was one of the very first charity songs recorded by a musical supergroup and led the way for 1985’s We Are The World, the Quincy Jones-produced hit that would raise over $63 million for humanitarian aid in Africa. That same year, Bob Geldof continued his fundraising efforts when he launched Live Aid, which would feature, among other highlights, Queen’s most iconic performance and a rare Led Zeppelin reunion.

Not only crafting a catchy festive song, Bob Geldof and Midge Ure created a gift that keeps giving. Since its initial release, Do They Know It’s Christmas? has been re-recorded for different charity fundraisers. Following Band Aid II, a 20th-anniversary Band Aid 20 edition was recorded, in 2004, with another batch of artists uniting ten years later for Band Aid 30. In a 2012 UK television special, The Nation’s Favourite Christmas Song, it ranked at No.6.

You can’t say all that about your average Christmas track.

Check out our 20 best Christmas songs of all time