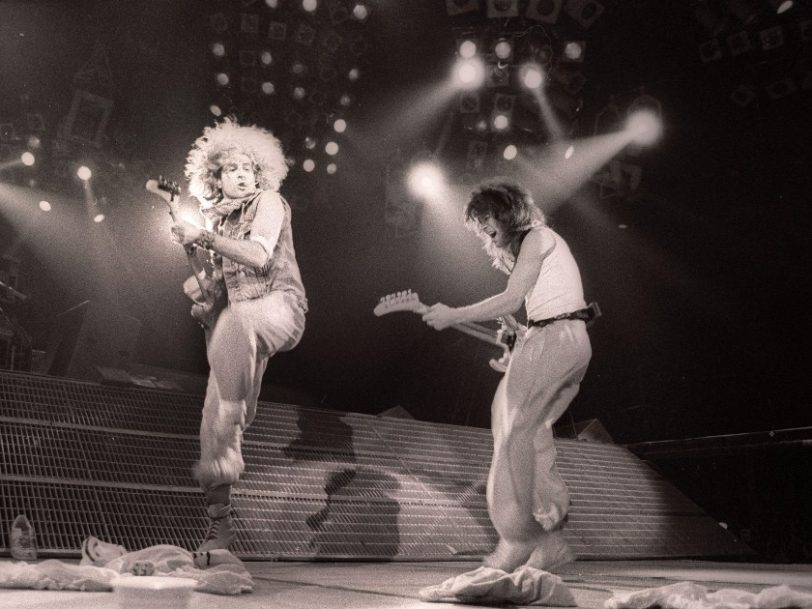 ‘Diver Down’: How Van Halen Flagged Up An Instant Classic

First issued in 1982, Van Halen’s fifth album, Diver Down, came housed in a strange sleeve that stood out among Van Halen album covers, barely hinted at the music contained within. The cover image – actually representing the red and white “diver down” warning flag used in numerous US jurisdictions to indicate a scuba diver submerged in the area – was, however, chosen specifically for its enigmatic quality.

Listen to ‘Diver Down’ here.

“It’s not immediately apparent what is going on underneath”

The same element of surprise applied where Diver Down’s music was concerned. A surprisingly brisk follow-up to the previous year’s painstakingly compiled Fair Warning, the album clocked in at barely half an hour, featured a variety of different styles and was the end result of a mere two weeks in the studio. With hindsight, it probably wasn’t what fans were expecting, but then Van Halen hadn’t planned on making a new album so soon. Indeed, Diver Down grew out of a one-off single project intended to keep the group in the public eye while they took some long-awaited time off.

“You got a hit single on your hands. We gotta have that record”

“When we came off the Fair Warning tour last year, we were going to take a break and spend a lot of time writing this and that,” guitarist Eddie Van Halen told Guitar Player in a 1982 interview. “Dave came up with the idea of, ‘Hey, why don’t we start off the new year with just putting out a single?’”

Van Halen’s frontman floated the idea of recording a cover, and initially pitched Martha And The Vandellas’ Motown classic Dancing In The Street. After Eddie struggled with the song’s arrangement (“I couldn’t figure out a riff… I always like to do a riff, as opposed to just hitting barre chords or something,” he later said), the band opted instead to record another favourite, Roy Orbison’s legendary 1964 hit, Oh, Pretty Woman.

“It took one day,” the guitarist said of the recalled session. “We went to Sunset Sound in LA, recorded it, and it came out right after the first of the year. It started climbing the charts, so all of a sudden Warner Bros is going, ‘You got a hit single on your hands. We gotta have that record.’”

“We jumped right back in without any time to recuperate”

Racing to No.12 on the Billboard Hot 100, Oh, Pretty Woman secured Van Halen their second major US hit, so it’s understandable their label were keen to release more fresh music. A little persuasion paid off and, as Eddie later noted, “We jumped right back in without any rest or time to recuperate for the tour, and started recording.”

An example of audio vérité in that much of it was written on the hoof, the guitarist later referred to Diver Down as a “hodgepodge”, but it wasn’t dashed off without care and attention. The album may have been hastily assembled, yet, as Classic Rock’s 2015 reappraisal rightly acknowledged, it also “turned out to be one of the band’s most fun records”.

In the stylistic sense, it’s true that Diver Down was generously diverse, but it was also highly compelling. Its tracklist took in everything from oddball, soundtrack-esque instrumentals (the jagged, menacing Intruder) through to the dextrous, two-part, Spanish-flavoured Secrets, and while there were five cover versions, they were all performed with gusto. The band’s supercharged garage-rock take on The Kinks’ Where Have All The Good Times Gone, for example, arguably shaded the original, while Dancing In The Street’s bubbling keyboards hinted at the synthesisers Eddie Van Halen would soon employ to decisive effect on the band’s next album, the multi-platinum 1984.

Elsewhere, Diver Down also included a couple of Van Halen’s hottest self-penned rockers, in Hang ’Em High and the cockroach-inspired The Full Bug, which featured Dave Lee Roth blasting a mean harmonica. The vocalist also played a central role in the creation of the excellent Big Bad Bill (Is Sweet William Now) – an unlikely but brilliant jazzy shuffle embellished with clarinet from Eddie and Alex Van Halen’s father, Jan.

“It was Dave’s idea to do Big Bad Bill,” Eddie told Guitar World. “He bought himself one of those Sanyo Walkman-type things with the FM-AM radio, and you can record off the radio if you like something you hear. He was up in his bedroom at his father’s house and he found that if he stood in a certain spot and pointed his antenna in a certain way, he picked up this weird radio station in Louisville, Kentucky.” After playing the 1920s barbershop hit back to the group, Roth suggested they get Eddie’s father to play clarinet on their version.

“It’s so funny, because I couldn’t play the song for you right now,” he continued. “I had to read [the music] because there were so many chords, I just couldn’t remember it. So here’s my father to the left of me, sitting on a chair with a music stand in front of him, and I’m sitting next to him with sheet music in a stand… It looked like an old 30s or 40s session.”

“It was nice to have a change”

Van Halen’s fans heartily approved of their heroes trying out a few new ideas. When Diver Down first hit the racks, on 14 April 1982, it rapidly rose up the Billboard 200 and peaked at No.3. The album has remained an impressive seller ever since, spending 65 weeks on the US charts during its initial run, and eventually moving over four million copies in North America alone.

With Eddie Van Halen building his own Californian studio (5150) prior to the recording of 1984, the band wouldn’t resort to the same quick-fire studio methodology again – but in retrospect, Eddie Van Halen was pleased Diver Down was put together that way.

“It was nice to have a change,” he said around the time of the album’s release. “I guess Fair Warning took longer than any album we’ve ever done, just because did more overdubs and there were more things on tape that had to be mixed… But this album was actually cheaper to record than our first one… And the reason why was the different approach.”