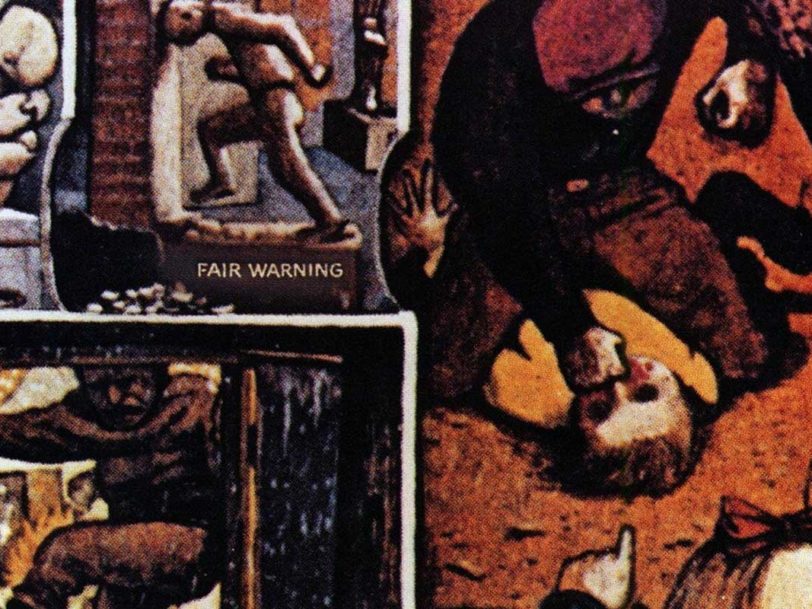 By 1981, Van Halen had perfected pop metal. Their second album had featured a masterful reinvention of Dee Dee Warwick’s classic R&B single You’re No Good alongside the group’s own first US Top 20 hit, Dance The Night Away; throw in the instantly iconic Beautiful Girls and it’s easy to see why the Pasadena four-piece were known as California’s premier party band. Women And Children First, their first collection of all-original material, shifted that sound on its axis. Where songs such as Could This Be Magic? retained some of the innocence of their first two records, And The Cradle Will Rock… and Everybody Wants Some!! showed off a heavier, side to the band. By the time Fair Warning came along, the band had lost that innocence entirely as they entered an altogether darker period – both personally and professionally.

“I wasn’t happy with the way things were going”

Taking place over the course of three weeks at Los Angeles’ Sunset Sound studios, the Fair Warning sessions mirrored those of Van Halen’s three previous records, with the closing song, the punk-charged One Foot Out The Door, being named, as producer Ted Templeman suggested, for the group’s fast-paced work rate – something they wouldn’t get away from until their monster hit album, 1984.

The record as a whole is coloured with the angst and frustration of Van Halen’s individual members. Singer David Lee Roth was nursing a bruised ego over Eddie Van Halen’s upcoming marriage to actress Valerie Bertinelli, which had caused a rift between the band’s two creative linchpins. “It was kind of a dark period in my life. I was getting married, which flipped Roth out to the bone,” Eddie recalled. “I actually overheard him say, ‘That fucking little prick, not only is he winning all the guitar awards, but he’s also the first to marry a movie star.’”

On a professional level, Eddie was uneasy with the influence that Roth and Templeman, the man responsible for producing the band’s first three hit records, had over Van Halen’s creative direction. Templeman strongly discouraged overdubs, pushing for the same live sensibility that characterised those original records. Writing in his memoir, Runnin’ With The Devil, the band’s then manager, Noel Monk, recalled that both singer and producer “wanted Van Halen to continue along the well-worn path that had proven highly successful thus far”. Eddie’s solution was to take the reins himself.

“I was starting to get more involved. And it shows. Especially on Fair Warning,” he told The Smashing Pumpkins’ Billy Corgan in 1996, in an interview for Guitar World. “But what I had to do to get involved was very strange. We’d work during the day, and I wasn’t very happy with the way things were going or the way people were approaching the whole recording process. I would sneak back into the studio at 4am with Don Landee, the engineer, and completely re-record all the solos and overdubs the way I wanted them.”

“Their hardest, most muscular album”

The tactic paid off. Released on 29 April 1981, Fair Warning was unlike anything fans had seen from Van Halen. Opening with a hard fade into one of Eddie’s most visionary guitar solos, before dropping into fan-favourite Mean Street, it’s instantly clear the band are working outside of the glamorous rock’n’roll excesses they’d become known for. With Roth singing of a downtrodden, dog-eat-dog neighbourhood; Eddie’s gritty guitar tone; and the 4/4 rhythm held down by the rhythm section of Michael Anthony (bass) and Alex Van Halen (drums), it sees the group working up something that, for the first time on record, sounds like heavy metal.

Beneath its grim subject matter, Dirty Movies reveals Eddie’s ability to weave lyrical guitar lines around Roth’s words, perfectly melding the two together. The same cohesion surfaces on Hear About It Later, which features some of the group’s tightest, most sophisticated songwriting as they move seamlessly between verse, pre-chorus, chorus, and bridge, before dropping the bottom out to clear the stage for Eddie’s solo… Speaking of which, Sinner’s Swing! delivers a blistering lead break, recalling the same explosive power of I’m The One, from the group’s self-titled debut album.

If there is a standout, commercially viable song on Fair Warning, it’s Unchained – one of two numbers, along with Hear About It Later, that were originally written on keyboard before being transposed to guitar. The anthemic chorus, “Change, nothing stays the same/Unchained, yeah, you hit the ground running,” captures the spirit of the album in perfect three-part harmony, while Ted Templeman’s fourth-wall interjection during the breakdown adds a little light humour to a record that doesn’t generally let up.

The slowest-selling album of Van Halen’s David Lee Roth era, Fair Warning was their “hardest and most muscular album”, Noel Monk later reflected, adding, “and for that reason it remains a favourite among the band’s hardcore fans”. However, he also admitted that they had to get creative with its sales, resorting to an unwritten backdoor system that relied on expensive intermediaries called “payola brokers”. With the band’s blessing, the group’s manager spent over $200,000 of their own money to boost the album’s radio play. The cost was worth it. Fair Warning weathered the storm and went platinum by the end of the year,

Is Eddie Van Halen the only guitarist to rival Jimi Hendrix? Find out here.