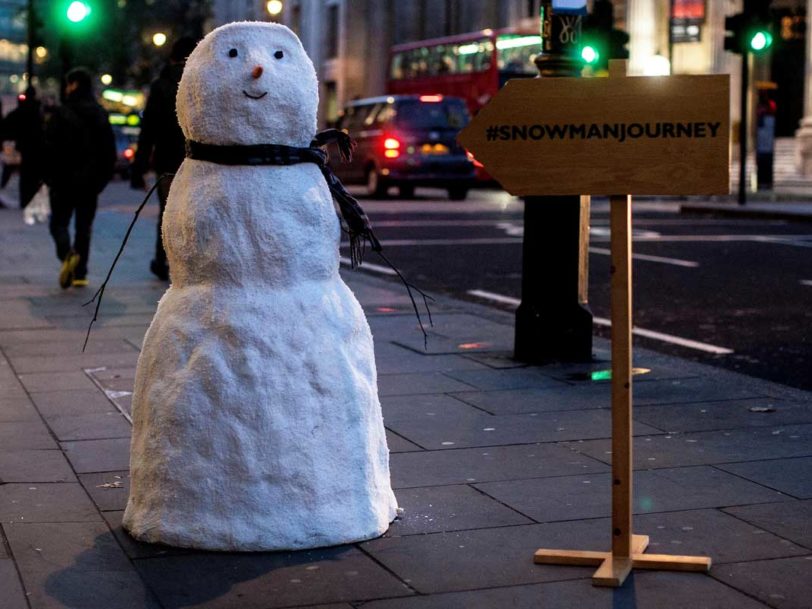 Now an annual tradition, the best John Lewis Christmas advert songs have provided us with some stunning and moving cover versions.

The release of John Lewis’ annual Christmas advert has become a festive tradition in the UK – and a reminder to get a move with buying presents! Since 2007, the British department-store chain have taken viewers on emotional journeys through their adverts; we’ve seen beautifully crafted stories of snowmen in love, lonely penguins and adorable children. The adverts wouldn’t be complete without their soundtracks, providing us with some stunning and moving cover versions. Over the last decade, the best John Lewis Christmas advert songs have followed a simple pattern: take a classic track, slow it down a bit, make it more emotional by adding some strings or an orchestra and you’re sorted – you’ve got yourself a tearjerker.

We’ve re-watched every one of their annual adverts from 2007 and have compiled a list of the best John Lewis Christmas advert songs so far.

Though certainly well executed on its own terms, John Lewis’ 2007 Christmas advert, entitled Shadows, bore little resemblance to the seasonal campaigns we now know and love. Unlike those the retailers have made in succeeding years, this one didn’t feature an emotional storyboard or a reimagined cover version. Instead, it was soundtracked by Morning Serenade, from Prokofiev’s Romeo And Juliet, and it featured Christmas presents being carefully positioned to create a shadow image of a woman and a dog in the snow, in the style of artists Tim Noble and Sue Webster.

The 2008 John Lewis Christmas advert was the first to feature the now-traditional cover version, with uncredited employees performing a stripped-back, piano-led take on The Beatles’ From Me To You. However, the ad itself – a montage of people of all ages, and their ideal gifts, with the tagline “If you know the person, you’ll find the present” – still lacked the emotional denouement we’ve since come to expect from the franchise.

London-based trio Vaults covered the jazz standard One Day I’ll Fly Away in 2016, to accompany the story of Buster The Boxer – a dog desperate to experience the joys of jumping on a trampoline. The advert was one of the most popular for John Lewis, who went on to sell soft toys for charity following its release, but, compared to Randy Crawford’s original, Vaults’ version doesn’t reach the heights of Buster on his trampoline. It peaked at No.53, the poorest UK chart performance of any of the John Lewis Christmas advert songs; less than a year after the advert’s release, Vaults called it quits.

John Lewis first used a cover song for a Christmas advert in 2008, when they got a group of employees to sing The Beatles’ From Me To You. In 2009 the company stepped things up a notch, enlisting a Swedish singer Victoria Bergsman to perform Guns N’ Roses’ Sweet Child O’ Mine. Recorded with her project Taken By Trees, the rendition centres around a piano performance of the song’s iconic opening riff, originally played by rock guitarist Slash. The gentle vocals and piano sound quite nice, but lack substance compared to the emotional performances and immense arrangements of future songs used by the company.

2020 marked the first time John Lewis commissioned a new song especially for their annual Christmas advert campaign, with this instalment being soundtracked by A Little Love, co-written and performed by rising UK soul star Celeste. The advert itself was partially animated and titled Give A Little Love, with the idea being that the small things we all do can make a real difference. The story begins with a young girl giving some love through her heart-shaped umbrella, and a little of this love spreading from person to person as the video unfolds. As always, it’s heart-melting stuff.

Tom Odell’s cover of John Lennon’s Real Love accompanied 2014’s story of the unlikely friendship between a young boy and Monty The Penguin. Odell had a tough job trying to improve on either John Lennon’s demo recording or the version the remaining Beatles finished in 1995. A bit too similar to the original, it earns its place among the best John Lewis Christmas advert songs thanks to the string section and backing vocals that come in at the crescendo.

Soundtracked by Lola Young’s ambient take on Philip Oakey and Giorgio Moroder’s 80s electro-pop classic, Together In Electric Dreams, John Lewis’ 2021 Christmas advert has an ET-esque space theme. Titled Unexpected Guest, it depicts a young boy meeting an alien in the woods who he brings home to meet his family for Christmas, showing that love can bridge the gap between worlds. Slightly darker and more downbeat than some of the classic John Lewis Christmas ads, it’s still a respectable addition to their festive canon.

The Smiths’ fans were surprised to hear the group’s 1984 B-side Please, Please, Please, Let Me Get What I Want on John Lewis’ 2011 festive commercial. It was covered by singer Amelia Warner, under the name Slow Moving Millie, who brought her soft acoustic stylings to the song. Warner’s vocals really add an extra dimension to the original, emphasising the passion of Morrissey’s lyrics and really showing what the best John Lewis Christmas advert songs can do.

The 2022 John Lewis Christmas advert may well provoke discussion for years to come. Titled The Beginner, the short clip concerns a well-meaning, if rather clumsy man who takes up skateboarding later in life than most. However, as the story unfolds, it reveals that our hapless hero’s not having a midlife crisis, but actually attempting to learn this new skill because he’s about to become a foster parent to a little girl who adores skateboarding.

Soundtracked by Postmodern Jukebox’s downbeat, piano-led cover of All The Small Things (originally a hit in the late 90s for skate-punks blink-182), the ad has polarised opinion (an article in The Guardian referred to it as “the most unapologetically depressing thing in human history”, provoking an enraged response), but it’s certainly struck a chord with the public. Whether The Beginner will be deemed a classic among the best John Lewis Christmas adverts is too early to call, but at a time when financial support for the UK’s child-care system is in jeopardy, John Lewis certainly deserve credit for using their annual campaign to highlight the issue with warmth and compassion.

The Beatles were covered for the third time on a John Lewis Christmas advert, as Elbow recorded their version of the Abbey Road track Golden Slumbers for the 2017 spot. The vocals from lead singer Guy Garvey work really well, his Northern accent particularly shining through on the chorus. Elbow really make the song their own – no mean feat for a track originally sung by Paul McCartney. The orchestral crescendo on the chorus brings a wave of emotion while also conveying the Christmassy feel of Elbow’s cover.

Despite having no lyrical references to the festive period, Frankie Goes to Hollywood’s 1984 track The Power Of Love has always had strong Christmas connotations. This was emphasised in 2012, when British singer Gabrielle Aplin covered it for the tale of a snowman making a treacherous journey to a John Lewis store to buy their partner a new woolly hat, scarf and gloves. The song works as a perfect backing for the Christmas advert and Aplin does a great job of transforming it into even more of a wintry ballad. Proving itself one of the best John Lewis Christmas advert songs, it was the first one to reach No.1 in the UK charts – no surprise, as Aplin’s haunting rendition can still be heard during the festive season.

2019’s John Lewis Christmas advert saw indie-pop group Bastille take on Can’t Fight This Feeling with help from the London Contemporary Orchestra. The cover is a good switch-up from REO Speedwagon’s original rock power ballad, but singer Dan Smith is at times overshadowed by the orchestral accompaniment. The horns and strings really underline the emotion behind the song as the orchestra helps to create a powerful climax.

The much-acclaimed 2018 John Lewis Christmas advert, titled The Boy And The Piano, not only featured a world-famous guest star (Elton John), but it’s arguably the most ambitious of the company’s festive series to date.

The clip begins with the star playing the opening notes of his famous hit Your Song, before following Elton as he reminisces about his life and career in reverse, eventually culminating with a Christmas Day in the 50s when he receives a piano from his mother.

Achieving this reverse-ageing effect was a complex process which required obtaining shots of a younger Elton through a variety of techniques, and even involved including a digital replica of the performer made by a team called MPC. It was worth the effort, however, for it became one of the most talked-about adverts of its time and, in 2019, won the Visual Effects Society Award for Outstanding Visual Effects In A Commercial.

To accompany 2015’s The Man On The Moon advert, Norwegian singer Aurora was chosen to cover Oasis’ 1994 song Half The World Away. Her version varies greatly from the Britpoppers’ original track, but Aurora’s unique voice sounds truly angelic. She succeeds in making her version just as – if not more – moving than the original, and many of her fans were shocked to discover that she hadn’t written it herself. The humming on the second verse really emphasises the passion behind the lyrics, helping to making the track one of best John Lewis Christmas advert songs.

Ellie Goulding’s cover of Elton John’s classic 1970 hit, Your Song, stalled at No.2 in the charts, but Goulding does a fantastic job on the iconic track, working up a simple instrumental compared with some of the other covers used in John Lewis’ Christmas ads. With a simplistic backing, Goulding’s vocals really carry the song and help to highlight the beauty behind Bernie Taupin’s original lyrics.

It’s also worth mentioning that 2018’s John Lewis Christmas advert featured Elton John himself, as we saw his career play out in reverse, tracing back to him receiving his first piano for Christmas. In this advert we hear his original version of Your Song in the background. While it is a legendary song, we’re only giving it an honourable mention here as this list focuses on the cover versions John Lewis have commissioned for their adverts.

Lily Allen’s 2013 take on Somewhere Only We Know tops our list of the best John Lewis Christmas advert songs. Most of Lily Allen’s chart-topping hits, such as Smile and The Fear, were more pop-focused songs which showed her incredible songwriting talent and unique style, but didn’t quite highlight her voice. In reworking this 2004 Keane track, Allen transforms the original to make it her own while revealing her incredible vocal talent. Somewhere Only We Know is one of the more emotional songs used by John Lewis, its crescendo easily bringing shivers without even watching the accompanying heart-wrenching advert. The single topped the British charts and sold over 600,000 copies, and is arguably just as well known – if not better known – than Keane’s original.

You’ve seen the best John Lewis Christmas adverts, now check out our pick of the best Christmas songs of all time.